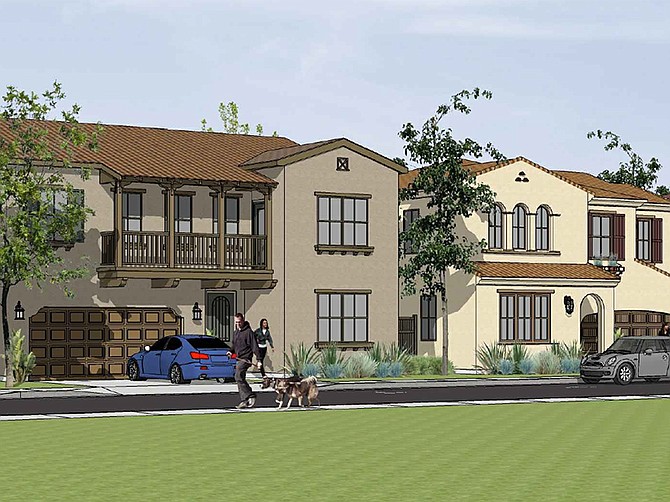 Rendering courtesy of Trumark Homes. Trumark Homes is planning a development of 301 homes in Oceanside at the corner of Oceanside Boulevard and Melrose Drive.

Fresh off the start of its first San Diego County project in Escondido, Trumark Homes based in San Ramone is focusing on Oceanside with plans for development of 301 homes.

Trumark Homes is a subsidiary of the Japanese firm, Daiwa Housing Group that acquired the California company in January 2020.

Melrose Heights will be a mix of two-story and three-story townhomes and single-family homes on a nearly 70.7-acre site at the corner of Oceanside Boulevard and Melrose Drive at Oceanside’s border with Vista.

The project also will include 20,000 square feet of commercial space.

Trumark in October started construction of the $21 million Edencrest project in Escondido with 95 homes on a 35.6-acre site near Dixon Lake.

Construction of Melrose Heights is expected to start in early 2021 with sales starting in October 2021 and construction expected to be finished by December 2024.

The project will have 196 three-story townhomes, 118 of which will have ground-floor living space, Douglass said.

The three-story townhomes will range from 1,617 square feet to 2,219 square feet.

“Affordability is really what’s driving the market, low interest rates and affordability, so the timing is right,” Douglass said.

A key part of the Oceanside development will be formation and preservation of a 34-acre nature preserve on the northern portion of the site that Douglass said will be managed by the San Diego Habitat Conservancy and the U.S. Fish and Wildlife Service and the California Department of Fish and Wildlife.

Douglass said Escondido and Oceanside are the first of several projects Trumark plans to build in San Diego County.

“The people within Trumark have all done things in San Diego and we wanted to get back there,” Douglass said. “Our management group has built award winning projects in San Diego. Hopefully, this will be another one.”

“Greater San Diego is a unique market and our management group has built award winning projects here in the past and we look to do that again here in Oceanside,” Douglass said. “Greater San Diego also is a market where many sellers value doing business with groups that have a significant presence and history in the region. It is critical for Trumark to have flags in the ground in the San Diego market to gather opportunities in the years ahead.”

Douglass said the property changed hands several times before Trumark acquired it Dec. 15 from Lionstone Investments based in Houston. He declined to disclose how much Trumark paid for the site.

“Melrose Heights is a unique opportunity in that it’s 300-plus units in North County, which is very rare,” said Andy Jones, founding principal of Tellus Land & Capital that brokered the deal.