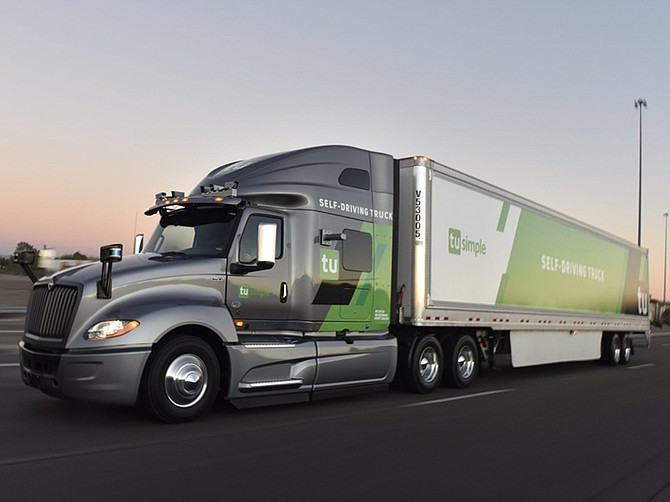 Photo courtesy of TuSimple. To date, the company has raised $648 million in funding, making it one of the top autonomous vehicle startups in the U.S., in terms of cash.

TuSimple, a startup developing self-driving technology for heavy-duty trucks, has raised about $350 million in a Series E round.

The La Jolla-based company received additional funding from a diverse consortium of strategic investors that include major U.S. corporations in rail, retail and freight, among others. An oversubscribed round, it was led by VectoIQ LLC.

Other investors Goodyear, Union Pacific, CN Rail, freight company U.S. Xpress and retailer Kroger all participated in the round.

TuSimple is developing a Level 4 system, a designation by SAE International that means the vehicle takes over all of the driving in certain conditions.

It uses computer vision to gain information about highway driving conditions and detect potential hazards. The company touts its system’s ability to “see” 1,000 meters ahead, giving the truck plenty of time to respond.

Founded in 2015, by founder and Chief Technology Officer of TuSimple Xiaodi Hou, TuSimple has significantly expanded in recent years with its global headcount capping at 650, with 200 local staffers working out of its headquarters in San Diego.

By 2018, TuSimple began to test on public roads, beginning with a 120-mile highway stretch between Tucson and Phoenix in Arizona and another segment in Shanghai. TuSimple has since expanded operations into Texas.

Its global headquarters in San Diego, TuSimple operates an engineering center and truck depot in Tucson and more recently set up a facility in Texas to support its autonomous trips. TuSimple also has operations in Beijing and Shanghai.

The fast-growing startup was one of the first autonomous trucking startups to emerge in what has become a small, yet competitive industry that now includes Aurora, Embark, Ike, Kodiak and Waymo.

The privately held company, which generates a small amount of revenue hauling freight for commercial customers, was valued at $1.12 billion prior to the Series E. It’s unclear what TuSimple’s new post-money valuation is.

Lu joined TuSimple as its CFO in 2019 and was named CEO in October 2020. Formerly, he was a partner and chief operating officer of KCA Capital Partners. Before KCA, he served as a principal at HOPU Investments and CITIC. In total, he brings over 11 years of experience in corporate finance and investment management.

By 2021, they expect to conduct the first commercial operations with drivers completely out of the vehicle on public roadways in the Arizona area. Building on that, TuSimple said it intends to have the first available commercially built vehicles manufactured in factories in 2023.

TuSimple plans to expand its delivery network in the coming years and begin selling autonomous trucks made through a partnership with Navistar by 2024.

The business is expected to file for public stock offering in the first quarter of 2021, which would sport a valuation ranging from $3.5 billion to $7 billion, according to several sources.

The company has 500 employees and more than 60 trucks in its fleet. To date, the company has raised $648 million in funding, making it one of the top autonomous vehicle startups in the U.S., in terms of cash.