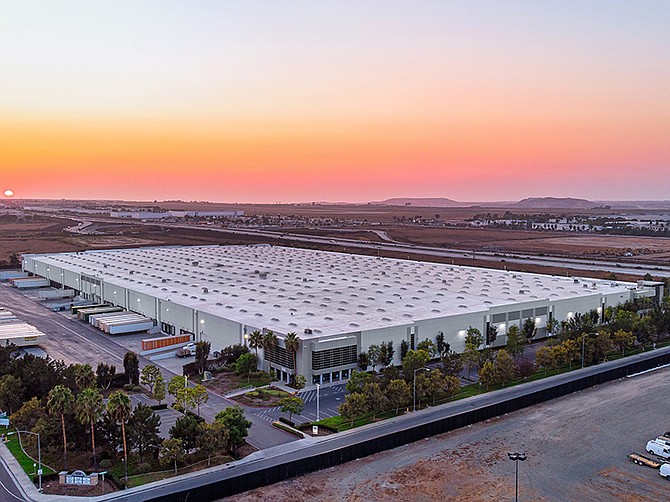 Photo courtesy of Cushman & Wakefield. One of the largest industrial buildings in San Diego County was recently sold in the fast growing submarket of Otay Mesa.

An Otay Mesa industrial building that’s been billed as the largest in San Diego County has been sold for a whopping $109 million in a submarket that’s seeing intense demand prompted by e-commerce and a shift by many companies to manufacture products in Mexico.

Neither party nor brokers involved in the deal would disclose the purchase price but it was pegged at $109 million by CoStar – making it one of the biggest industrial sales in the region.

Aberg was among several brokers from Cushman & Wakefield who worked on the deal on behalf of the seller.

Until recently, the typical industrial building in San Diego County was about 30,000 square feet, Aberg said.

Over the past five years, the average size of new industrial buildings in San Diego County has grown to about 180,000 square feet, according to Aberg, with the Piper Ranch Road building dwarfing most of the others.

Although constructed in 2003, the building “was built to today’s standards,” Aberg said.

Fully leased, the building has varied bay sizes with grade and dock-high doors, up to 32-foot clear heights and large concrete truck courts.

“It was built with a lot of excess trailer parking,” Aberg said.

Because land costs have risen so sharply since, “a lot of developers are having to max out what they’re building on site,” Aberg said

Otay Mesa has had a 1.4 million square feet of industrial space occupied since 2015 with little sign of slackening demand during the COVID-19 pandemic, according to figures from Cushman & Wakefield.

Stream Realty, a commercial real estate brokerage, wrote in its third quarter 2020 report that the vacancy rate for industrial buildings in South County including Otay Mesa dropped to 5.7% and rents rose 5.6%.

As impressive as the 2020 Piper Ranch Road building may be, an even bigger addition to the Otay Mesa market will come in mid-2021 when a when massive 3.3 million square-foot distribution center is slated for completion for Amazon.

“The market is a much bigger playing field now,” Aberg said. “We’ve seen a tremendous amount of tenant activity coming from North and Central San Diego to Otay Mesa. Because of large e-commerce demand, because of COVID, it’s really accelerated.”

Fueling the demand is a shift by many manufacturers to Mexico after being burned in the early day of the pandemic with supply issues for material coming from distant overseas markets.

“We’re seeing a lot of manufacturing going to Mexico,” Aberg said, with manufacturers then sending products to Otay Mesa for storage and distribution.

“We think we’re going to see a big increase in demand on the California side to Otay Mesa,” Aberg said.