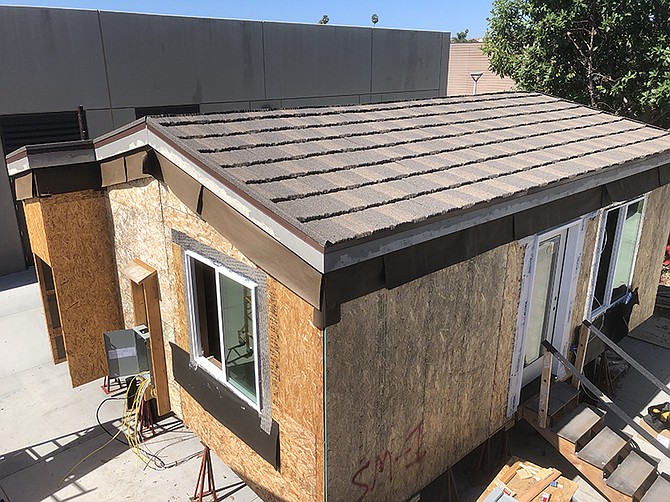 Photo courtesy of Mark Pilcher. A mini-home was built for Wounded Warrior Homes by San Marcos High School students and volunteers from the construction industry and the Seabees.

A San Marcos nonprofit that serves veterans is adding a self-contained mini-house to its property in Vista to serve as a home for formerly homeless veterans recovering from post-traumatic stress disorder.

Built largely by students from San Marcos High School, the mini-home is meant to be a prototype for creating villages of tiny homes for homeless veterans.

That’s still the plan, but Roseberry said that aside from building the prototype, the plan is on hold temporarily because of the COVID-19 pandemic.

“All the charities are struggling financially right now. We’re in a solid spot but the thought of putting money out to build anything, we need to make sure we get through the pandemic,” Roseberry said.

“We just need to get them stabilized, a solid roof over their heads, then they’re stable, they can do great things. They can start to make decisions other than where am I going to sleep.”

The idea of the mini-home is to give one veteran at a time a chance to live on his or her own as opposed to living in a group home to better prepare them to live independently.

“It will give them a sense of what it’s really like to live alone. Many of them have never done that. A lot of our military go straight from a home where they’ve always lived with somebody into the military,” Roseberry said. “It’s a difficult transition because what they’ve always known in their adult life is being in the military. The civilian sector, when you think about it, it works in a very different way than the military.”

The prototype mini-home is 404 square feet with a full kitchen, full bathroom and living room.

Most of the prototype was built by students at the high school then trucked to a York Drive site where Wounded Warrior Homes has a five-bedroom house that it uses for temporary veteran housing.

Because of the pandemic, the students were unable to finish the prototype mini-home, said Mark Pilcher of Fallbrook, a retired oil and gas company executive who organized the school side of the project as part of a construction trades program.

The mini-home project “is an endeavor to teach kids building and construction trades while at the same time having them build something useful. Rather than just building some shed or some small piece of something and tearing it apart and reusing the lumber, they actually build something that’s usable when they’re done,” Pilcher said. “Our original plan was to have the students do basically 95% of the work on the high school campus.”

The pandemic hit, and the mini-house was incomplete.

Volunteers from several construction companies and organizations and the Navy Seabees stepped in to finish the mini-home that the students had started.

“We’ve probably got 60 companies now that have been supporting us through financial donations, donation of materials.” Pilcher said.

Longer term, Pilcher would like to expand the mini-home construction program to other high schools in the region.

To start, Picher said the mini-home program is focusing on veterans but he’d like to expand it to include other groups.

“The idea is about 12 of these cottages would build a community,” Pilcher said. “The ultimate goal is a small village, a community that’s small enough to be friendly and supportive is the goal.”

Because much of the material and all of the labor for the Wound Warrior Homes prototype was donated, Pilcher said it’s difficult to put a price on it, but he said it would likely cost $100,000 to $150,000 to build on the open market.