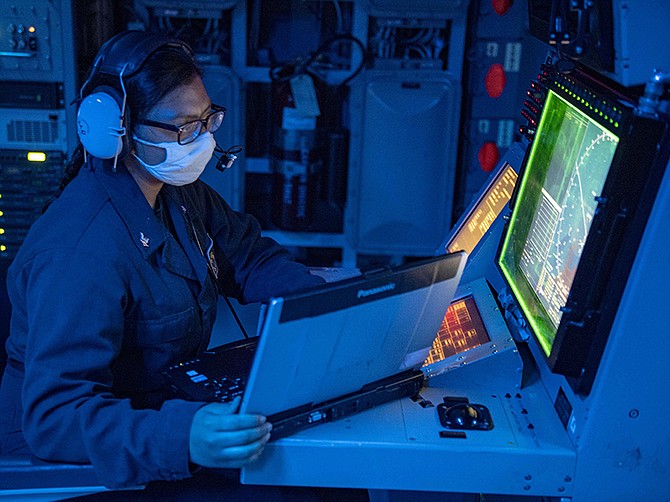 Photo courtesy of U.S. Navy. Fire Controlman (Aegis) 3rd Class Alexis Escobar stands watch as the radar systems controller in the guided-missile destroyer USS Mustin in the Philippine Sea. Lockheed Martin will do $1.9 million of support work related to the Aegis Weapon System in San Diego in the coming year.

Certain U.S. Navy ships have a powerful tool to defend themselves from attack: the Aegis Weapon System. In San Diego, Lockheed Martin Corp. has roughly $1.9 million worth of Aegis work on its calendar over the next year.

The job is part of a larger award from Nov. 30, which has work going to several cities.

The Navy awarded Lockheed Martin (NYSE: LMT) a $7.7 million modification to a previously awarded contract to exercise options for ship integration and test of several generations of Aegis Weapon System.

The Navy describes the Aegis Weapon System as a centralized, automated, command-and-control and weapons control system. The high-powered radar at the heart of the system is able to perform search, track and missile guidance functions simultaneously, with a track capacity of more than 100 targets.

Lockheed Martin and predecessor RCA have been refining the weapon system since 1969. The first Aegis ship, the USS Ticonderoga, was commissioned in 1983.

The word Aegis in English means shield or protection. In Greek mythology, it is something worn by the gods.

The U.S. Navy awarded Solute Inc. of San Diego a network support contract that could be worth as much as $15.5 million.

Under the two-year deal, Solute will provide support for an automated digital network system to include engineering and programmatic services for communications systems. Also included are certification and information assurance for current operations, planned upgrades and developments.

The two-year contract includes four two-year option periods which, if exercised, would bring the overall potential value of this contract to an estimated $83.7 million.

The bulk of the work will be performed in California with small portions in Hawaii; Charleston, South Carolina; Norfolk, Virginia; Bahrain; and Italy. If all options are exercised, the period of performance would extend through November 2030. No funds will be obligated at the time of award. Funds will be obligated as task orders are issued under the indefinite delivery, indefinite quantity deal.

The contract was competitively procured. A request for proposal was published on the beta.sam.gov website. Six offers were received. The Naval Information Warfare Center Pacific of San Diego awarded the contract, announced on Nov. 30.

The U.S. Navy awarded KBR Wyle Services LLC of Lexington Park, Maryland a contract to provide technical assistance, program management, engineering, financial and logistics support for the integrated product teams that acquire and sustain F-18 series aircraft for foreign military sales customers and the governments of Finland and Kuwait. Some 2.6% of the work, worth an estimated $225,000, will be performed at Naval Air Station North Island. Work is expected to be completed in August 2025. The total contract is worth $8.7 million. The government did not put the contract out to bid as it determined there is only one bidder able to meet the government’s requirements. The Naval Air Warfare Center Aircraft Division at Patuxent River, Maryland awarded the deal, announced on Aug. 21.

USS Bonhomme Richard to Be Decommissioned

The USS Bonhomme Richard, which burned for several days in July at Naval Base San Diego, will be decommissioned, U.S. Navy leaders said on Nov. 30. The reason was cost. Navy Secretary Kenneth Braithwaite said in a statement that it was “not fiscally responsible to restore her.”

The cost to restore the ship was estimated to be in excess of $3 billion, with the process expected to take five to seven years. The Bonhomme Richard is a Wasp-class amphibious assault ship, with a large flat deck to accommodate aircraft.

Even rebuilding the ship for another use would exceed $1 billion, the Navy said. The sum is as much or more than a brand new hospital ship, submarine tender or command and control ship.

The Navy said it will schedule an inactivation availability to remove systems and components for use in other ships. The Navy is finalizing a timeline for towing and dismantlement.

Investigation into the cause of the fire is still ongoing.