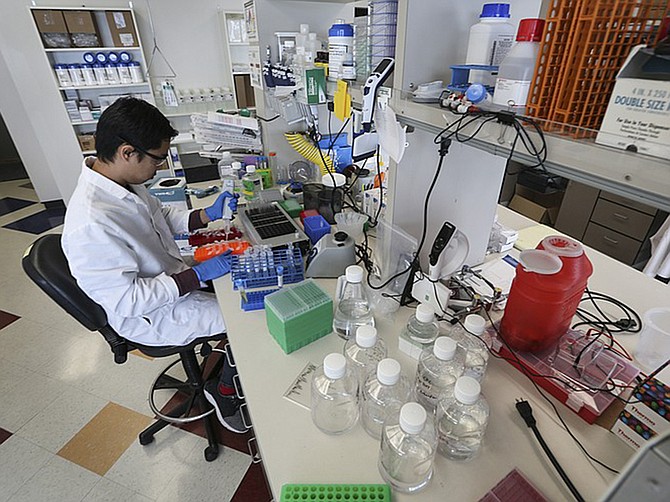 Photo Courtesy of Halozyme. Horizon will pay Halozyme $190 million to use the company’s drug delivery platform, Enhanze, to create a subcutaneous version of its recently-approved thyroid eye disease med Tepezza.

This year was exceptionally strong for Halozyme Therapeutics. Its share price hit an all-time high, and Halozyme inked several deals with drug giants bolstering the company to have its first profitable year.

The company reported $65.3 million in third-quarter revenues this year, up from $46.2 million during that same period in 2019. That year-over-year increase was largely driven by $32 million in collaboration revenue from Roche and argenx.

Halozyme’s Chief Executive Helen Torley is confident 2021 will be another good year, perhaps even better than 2020, as more drugs approach approval.

The San Diego-based company’s technology, called Enhanze, allows some drugs traditionally given intravenously over hours to be delivered instead by subcutaneous injection in minutes.

Enhanze-partnered drugs have been racking up approvals in recent months: Janssen’s Faspro  won nods from the FDA and the European Medicines Agency, and Roche’s combination breast cancer med Phesgo grabbed an FDA green light in June.

Horizon will tap Enhanze to develop a subcutaneous formulation of its thyroid eye disease med Tepezza.

Horizon is set to pay Halozyme $30 million upfront for the deal and is on the hook for further payments of up to $160 million linked to pre-set development, regulatory and sales-based milestones, plus future royalty payments for a potential Enhanze-paired commercial product.

Halozyme, for its part, will provide API for its drug delivery platform, based on its patented recombinant human hyaluronidase enzyme and will also advise Horizon, offering input on formulation work, clinical trial design and potential meetings with regulators.

Halozyme has inked similar deals with Johnson & Johnson, AbbVie and Eli Lilly, all of which paid between $15 million and $25 million up front to use the Enhanze platform. The potential payoffs from the deals range from $581 million to $1.17 billion.

The company now has five partnered drugs on the market and expects a total of five phase 1 starts for Enhanze-paired products before the year is out, with a clear line of sight to additional trial launches in 2021, Torley said.

Between 2020 and 2022, the company expects to pick up $350 million to $450 million in milestone payments as its partnered programs move through the clinic. The company has been gunning for royalties that could hit nearly $1 billion by 2027.

Halozyme suffered a setback in November 2019 when its investigational pancreatic drug failed a Phase 3 clinical trial. The company had laid off more than half its employees and dialed back R&D spending to $9 million, down from $33.9 million during the same period last year.

With a failed pancreatic cancer program now well in the rearview, Halozyme Therapeutics has spent the last year and change moving full speed ahead on its drug delivery business.

In March, Elaine Sun joined as senior vice president and CFO succeeding Laurie Stelzer, who was key in the 2019 restructuring. Sun’s appointment will offer strength in its goals toward long-term growth and profitability.

“The operational excellence, high accountability, is just a hallmark of the wonderful team at Halozyme. They were able to meet the transformation this year, not just the restructuring of the company but also adapting to COVID-19,” said Torley.