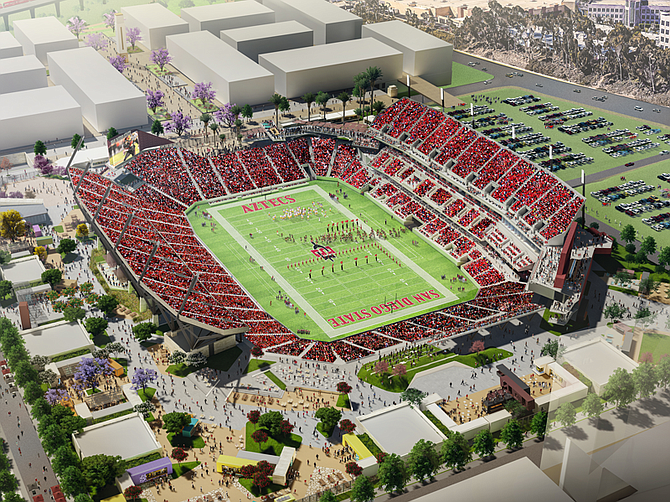 Photo courtesy of San Diego State University. Preliminary work is under way for construction of a new Aztec stadium in Mission Valley.

San Diego State University is selling off bits and pieces of the Mission Valley sports stadium that was home to the Padres, the Chargers, the Aztecs and an untold number of special events from international soccer tournaments to monster truck matches.

Everything from signs identifying stadium seating sections to grounds-keeping equipment will be up for bid in an online auction run for the university by Heritage Global Partners Dec. 14 to Dec. 16.

Based in Del Mar, Heritage Global Partners has sold memorabilia from a number of other stadiums that were replaced by newer models, including Candlestick Park in San Francisco and Amway Arena in Orlando.

The Mission Valley stadium, known at various times as Jack Murphy Stadium, Qualcomm Stadium and SDCCU Stadium, is different because the main part of the building is being demolished so fans can’t buy chunks of the structure.

The old stadium is being taken apart bit by bit rather than imploded in a single detonation because of concern over debris it would kick up, said Gina Jacobs, associate vice president, SDSU Mission Valley Development.

“The air quality standards in California are pretty strong and the amount of dust that that would generate, we just didn’t want to take a chance with any of that,” Jacobs said.

“The concrete is actually going to be recycled on site. It will be ground up and used as fill,” Jacobs said.

Much of the 135 acre site is in a flood plain, and SDSU must raise it with fill before construction can begin on the overall project that would include 1.6 million square feet of academic and research space, 4,600 residences, 95,000 square feet of retail space, 400 hotel rooms and 80 acres of open space.

Demolition started on the southeast side of the old stadium and will likely take until mid-June to complete, Jacobs said.

Concurrent with the demolition of the old stadium, preliminary work is under way for a new 35,000-seat stadium on the northwest corner of the site with the concrete foundation to be poured this month.

Actual construction should start in the second half of 2021, Jacobs said.

“It’s targeted for completion to open for our September 2022 football season,” she said.

The original plan was for the SDSU Aztecs to continue to play in the old stadium while the new one was being built, but the COVID-19 pandemic made that impossible, Jacobs said.

Instead, the team is playing in Carson.

The market for memorabilia from the old stadium is likely to be broader than is typical because so many different teams played in it, Dove said.

“Because of that, there’s a lot of interest from different sectors,” Dove said. “The stadium means different things to different people with different fan bases.”

Stadium seats went on sale Dec. 1 through SDSU Athletics in a separate sale.

Dove said he bought a pair of seats.

The seats are sold only in pairs for $329 per pair with a limit of two pairs per person.

Money from the sale of stadium memorabilia will be invested in the new stadium, Jacobs said, although she had no estimate on how much the auction and seat sale might raise.