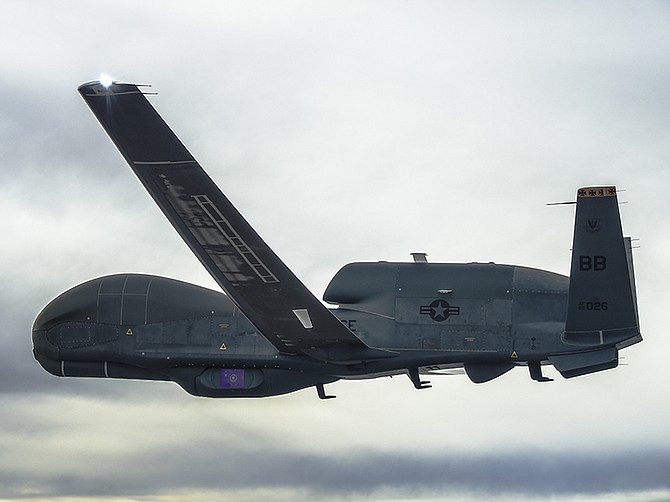 The U.S. Air Force plans to spend a maximum of $4.8 billion with Northrop Grumman Corp. over the next 10 years to keep its fleet of 34 Global Hawk unmanned aircraft flying with up-to-date technology.

The military service announced in late November that it awarded Northrop Grumman (NYSE: NOC) a wide-ranging contract with a $4.8 billion ceiling. Work under the contract will be done between now and September of 2030.

ISR stands for intelligence, surveillance and reconnaissance, which is Global Hawk’s main job.

A similar services contract expired in September of this year.

Much of the work will be done in San Diego, which is home to the Global Hawk program as well as Northrop Grumman’s other unmanned aircraft projects.

The Global Hawk weighs 16 tons at takeoff and has a wingspan of 131 feet. It can fly at 60,000 feet and stay airborne for longer than 32 hours. A crew of three operates the aircraft from a ground station.

The recently announced contract will cover engineering efforts and related areas of concern such as technical refresh, as well as issues related to diminishing manufacturing sources. Cybersecurity and information assurance are also covered under the contract. The term information assurance refers to the integrity and authenticity of data.

The deal also refers to facilities modifications and renovation. And it covers logistics support.

In short, the contract covers “everything from adding new capabilities to upgrading existing capabilities to repairing broken parts to providing technical reach-back support (think phone-a-friend for engineering help) for the men and women of the U.S. Air Force who operate and maintain the fleet,” said Smith.

“The U.S. Air Force will ultimately determine what capabilities are needed to keep Global Hawk at the forefront of global ISR collection and ready to perform additional missions that connect the joint force, including persistent high capacity backbone, pseudo-satellite communications coverage, and Joint All-Domain Command and Control,” Smith added.

The deal is an indefinite delivery, indefinite quantity contract, which is typical for military contracts that cover services. The Air Force will use the contract by issuing specific task orders under it. The Air Force Life Cycle Management Center at Wright-Patterson Air Force Base in Ohio awarded the deal, announced on Nov. 25.

The endurance capabilities of the Global Hawk aircraft were illustrated earlier in November. Northrop Grumman delivered an aircraft to NATO, flying it from Southern California to Italy in a little less than 20 hours. The flight was from Palmdale, where Northrop Grumman builds the Global Hawk aircraft, to Sigonella Air Base in Sicily. It is the fifth and last aircraft for the NATO alliance.

The base in Sicily is home to U.S. models of the same aircraft, according to an account in Stars and Stripes. They include U.S. Air Force Global Hawks as well as the U.S. Navy version, called BAMS (Broad Area Maritime Surveillance). The Navy is still buying new aircraft.

In other news from earlier in the fall, Northrop Grumman announced it had equipped a Global Hawk with an MS-177 multi-spectral camera system, which provides high-resolution imagery. The high-tech sensor, built by Collins Aerospace, is related to the powerful camera carried on the U-2 spy aircraft. It picks up light in the visible as well as the infrared spectrum. The sophisticated military camera is roughly 3 feet in diameter and 5½ feet long, and weighs 538 pounds.

“New and improved payloads flying on our young, yet proven fleet of aircraft will allow our partners to deploy high value, networked assets to monitor adversaries while not risking the lives of military personnel well into the 2040s,” Smith said in September.

Northrop Grumman promotes its Global Hawk as more than a collector of intelligence. It can also be used as an airborne communications center, something roughly equivalent to a cell phone tower in the sky.