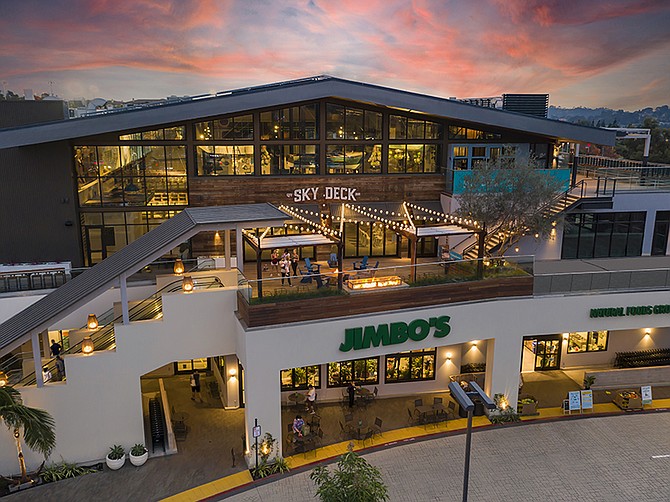 A new, Barcelona-inspired dining destination is coming to San Diego.

Sky Deck, a food and beverage collective, is scheduled to open May 2021.

Located on the second story of a recently relocated 25,000 square foot Jimbo’s… Naturally! at Del Mar Highlands Town Center, it was originally slated to open in early 2020 but has faced numerous setbacks due to COVID-19.

The space is one lease away from being at 100% occupancy.

Sky Deck is part of a $120 million expansion of the Del Mar Highlands Town Center that begun in 2018, said Patrick Donahue, former chairman and CEO of Donahue Schriber Realty Group; Donahue will be replaced by Michael Glimcher, who was named chairman president and CEO in November 2020, upon his retirement. This included moving Jimbo’s from a 15,000 square foot space to its larger, anchor location, he said, as well as the addition of 100,000 square feet of retail and a three-level parking structure.

Sky Deck, though, is the highlight of the project, said Donahue. The expansion will create over 200 new jobs, he said, and is expected to do between $15 Million and $20 Million in volume.

“We saw the concept in Barcelona, Spain, called El Nacional and I studied it for two or three days when I was there for New Year’s about five years ago,” he said. “I sent leasing, architect and construction people over there to get their take on it and we all had the same feeling: it would work well here. While Sky View is different in design in a lot of ways, in concept it is very similar. We looked at many of the food halls in Europe and in the U.S. and we don’t think anyone has done it quite like this.”

While inspired by the Barcelona venue, El Nacional is larger than Sky Deck at 45,000 square feet, said Donahue. It has an enclosed parking structure, unlike Sky Deck, and is divided into four culinary areas and four bars.

As previously mentioned, Sky Deck houses 10 food places, he said, all of which will surround one center bar. Understory, the central craft cocktail bar, will be the centerpiece of the overall venue. In addition to one-of-a-kind craft cocktails, customers will be able to order from any Sky Deck restaurant while enjoying a beverage at Understory, he said.

Tim Sullivan, property manager at Donahue Schriber Realty Group, said Sky Deck is not to be confused by a traditional food court or food hall. The major difference is in the seating, which is specific to each restaurant, he said, and not a communal area typical of the other types.

“Our goal was to create a one of a kind experience for our customers to relax and enjoy themselves,” said Sullivan. “We think (this) creates a different feel, especially at night where people will have the choice of different sit-down restaurants, a central bar and a beer garden which will serve food selections from each of the restaurants. The whole experience will be approachable, local and fun.”