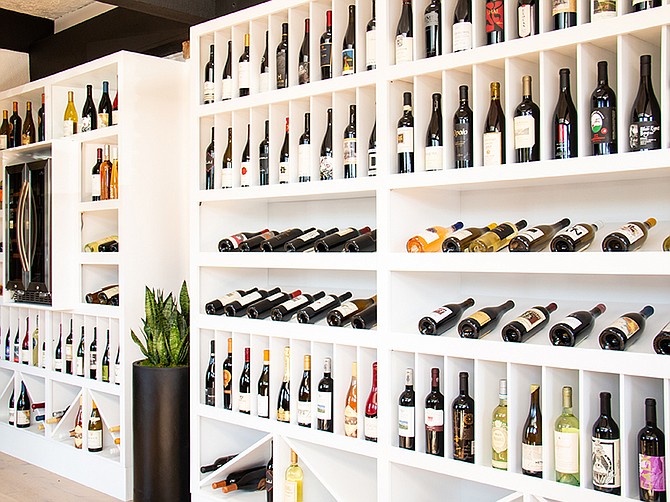 Grand Restaurant Group, a local hospitality firm with a focus on reconceptualizing pre-existing restaurants, is diversifying its brand.

The Escondido-based company recently opened Cork & Knife, a small batch wine store that will offer close to 100 varieties for both in-person and online purchase. The over 1,000 square foot location, which is part of a 10,000 square foot space that was formerly a Marie Callender’s restaurant, will also specialize in artisan meats and cheeses from around the world, cheese and wine pairings, seasonal tapas and catering.

Derry Robert Van Nortwick is the project manager for Cork & Knife. He said the impetus behind the venture was to create a new multi-concept business model that provides relatively low overhead and various revenue stream.

Cork & Knife will be housed alongside Grand Restaurant Group’s newest DiCicco’s restaurant, which will also be located where Marie Callender’s used to be. DiCicco’s is scheduled to open in Escondido by the end of year. The two food places will have separate entrances, he said.

“I think restaurateurs and the industry overall has been moving this way for a while. The cost of doing business is going up everywhere you go, especially in hospitality, which has now taken such a gut punch with COVID-19,” said Van Nortwick. “In my world, I have to think of the industry and where it is going – a lot of it is going toward lower overhead in terms of human resources. So, this model only requires a couple of folks to run it but offers many ways to make a sale and engage and find a customer. That is the framework of the business model. People are thinking, ‘how can I work in this world, in a marketplace that is continuously changing and with food cost going up?’ You have to think outside the box.”

Cork & Knife functions as a wine shop as well as a cheese and meat retail store, he said. There are also roughly 15 tables that patrons can sit at and enjoy a cheese board or a small tapas plate and wine, which adds a social aspect to Cork & Knife, said Van Nortwick. Additionally, customers can visit the Cork & Knife site and order cheese and cured meat platters as part of the catering program.

Van Nortwick described the atmosphere at Cork & Knife as a clean and airy aesthetic. He said the interior features bright colors, brass elements and a lot of stone. The goal, he said, is for customers to feel happy when they step foot inside.

The location, which cost Grand Restaurant Group about $42,000 to build-out, will employ two to three staff members, said Van Nortwick. The Escondido opening will be followed by another location in Rancho Santa Fe (700 square feet) and then another in Clovis (1,500 square feet), a city near Fresno.

With the new additions and despite the economic downturn due to the pandemic, the company’s revenue is projected to grow from roughly $45 million in 2019 to about $55 million by the end of 2021.

Van Nortwick said, although San Diego has shut down indoor dining again in response to increasing coronavirus infection rates, he is bullish on the future of Cork & Knife.

“You know, when you are an entrepreneurial person, you have to be extremely optimistic and only concern yourself with the end result,” he said. “A lot of things right in front of you are not going to be factors six months from now, a year from now. You can’t spend time worrying. You have to persevere and keep going. We are building something for the future of others.”

“We (Grand Restaurant group) always look towards the future with cautious optimism,” she said. “Cork & Knife is a great concept that we were able to leverage into our existing locations to diversify our brands and further serve the communities they are established in. We have faith in our team and the people who have supported us throughout the years to make our ventures successful.”