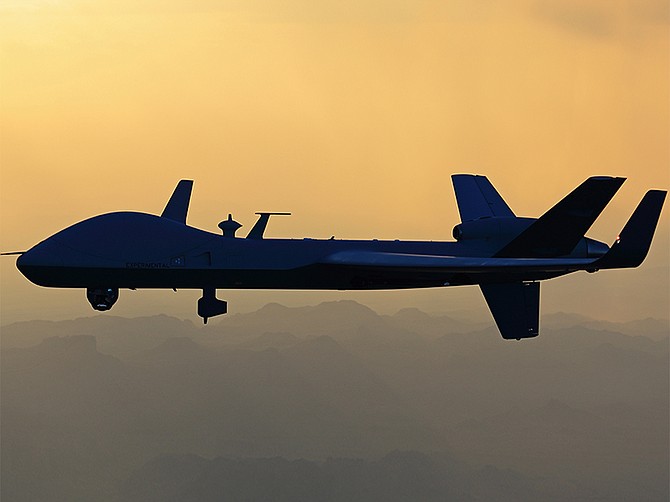 The government of Belgium has signed a $189 million contract with GA-ASI to buy remotely piloted aircraft and related equipment.

The U.S. Air Force, which acts as a middleman in the sale, announced the deal on Aug. 14.

Belgium is buying four MQ-9B Sky Guardian aircraft, as well as two ground stations, spares and equipment in the foreign military sale, the Pentagon said. The aircraft will be built in Poway. The deal also includes design, development and integration services. The first delivery is expected in 2023 and the order is expected to be complete by March 2024.

“We look forward to providing our RPAs [remotely piloted aircraft] to meet Belgium’s mission requirements, while also supporting the NATO Alliance,” said Linden P. Blue, CEO of GA-ASI, in a statement issued by the company.

The Sky Guardian has a fuselage 38 feet long, a wingspan of 79 feet and weighs more than 6 tons at takeoff. It is designed to collect intelligence and deliver weapons. It flies without anyone on board. Its pilot and sensor operators control the aircraft from a ground station and connect to the aircraft via a satellite link.

The Sky Guardian is derived from GA-ASI’s original Predator and Reaper aircraft. The Sky Guardian model includes several features that make it safe to fly in NATO airspace. They include many internal changes from the war zone variant, including electronics that can sense and avoid other aircraft in its vicinity.

In a war zone, the Sky Guardian can use its cameras and sensors to observe the ground situation. It can also deliver bombs or missiles. The aircraft can stay in the air for more than 40 hours and fly at altitudes greater than 40,000 feet.

GA-ASI is an affiliate of General Atomics, which is owned by the Blue family. The businesses are private and do not disclose revenue. They are large enterprises. GA-ASI alone employs thousands of people.

The deal benefits businesses in Belgium as well. “Through our Belgian R&D seed-funding initiative, we are connected with many Belgian companies interested in further improving the capabilities of the SkyGuardian system,” Blue said.

GA-ASI is making a major push into overseas sales. The Royal Air Force of the United Kingdom signed an $82 million deal to buy its first three Sky Guardian aircraft, plus ground stations and associated equipment. The deal could swell to 16 aircraft.

Australia is expected to buy GA-ASI aircraft, and the business is on the hunt for Canadian business partners for a sale to that country.

GA-ASI also builds a version of the aircraft with a sensor package suitable for use over the ocean.

The Japanese coast guard is preparing to put a GA-ASI aircraft through two months’ worth of tests later this year. The purpose of the flights is to validate the wide-area maritime surveillance capabilities of remotely piloted aircraft for carrying out the coast guard’s missions, including search and rescue, disaster response and maritime law enforcement. The Japan Maritime Self Defense Force will support the flights from its Hachinohe base in Aomori Prefecture, in the north of Japan.