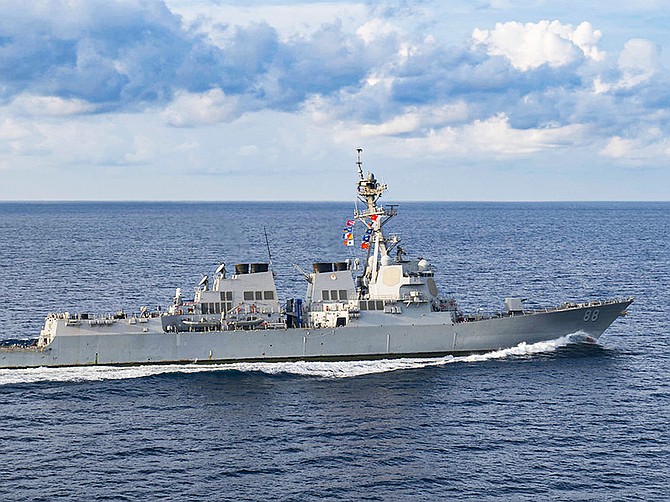 Photo courtesy of U.S. Navy. The USS Preble in the Indian Ocean during a 2018 deployment. BAE Systems San Diego Ship Repair won a contract to modernize and repair the destroyer.

The following are selected defense contracts awarded to San Diego County companies in July and August. They have been announced by the U.S. Department of Defense. Listings also include companies operating in San Diego County.

The U.S. Navy awarded BAE Systems San Diego Ship Repair in Barrio Logan a $103.6 million contract to maintain, modernize and repair the USS Preble. The Preble is an Arleigh Burke-class guided missile destroyer slated to go in for its Chief of Naval Operations scheduled depot maintenance period. This contract includes options, which, if exercised, would bring the value of the deal to $117.8 million.

The USS Preble will receive comprehensive modernization for DDG-51 class ships to ensure a mission relevant service life. This is a “long-term” availability and was solicited on a coast-wide basis without limiting the place of performance to the vessel’s homeport. Work is expected to be complete by February 2022. This contract was competitively procured via the Federal Business Opportunities website with two competitive proposals received. The Naval Sea Systems Command of Washington, D.C. awarded the contract, announced on Aug. 13.

The Department of the Navy awarded RQ Construction LLC of Carlsbad a $33.6 million contract to build an operations complex to house the 5th Battalion, 10th Marines High Mobility Artillery Rocket System (HIMARS), located at the Marine Corps Base in Camp Lejeune, North Carolina. Work is expected to be complete by March 2023.

RQ already has work at Camp Lejeune. It is reconstructing hurricane-damaged buildings in a joint venture with DPR Construction.

The contract was competitively procured via the Government Point of Entry Contract Opportunities on the beta.SAM.com website with 10 proposals received. The Naval Facilities Engineering Command, Mid-Atlantic of Norfolk, Virginia awarded the deal, announced on Aug. 13.

The U.S. Air Force awarded BAE Systems Information and Electronic Systems Integration of Greenlawn, New York, a five-year, $144 million contract for common avionics and electronic components for aircraft. The contract provides for sustainment of spares/buys, repairs and engineering services related to various systems and components that are sole source to BAE. An unspecified portion of the work will be performed in San Diego and is expected to be completed by March 2026. The Air Force Sustainment Center at Robins Air Force Base, Georgia, awarded the contract, announced on Aug. 7.

The U.S. Navy awarded Progeny Systems Corp. of Manassas, Virginia an $18.1 million modification to a previously awarded contract to exercise options for engineering and technical services for Navy submarines that will include software development, commercial off-the-shelf products and hardware and software integration. Ten percent of the work, or $1.8 million worth, will be performed in San Diego with the balance in Manassas and Middletown, Rhode Island.

The supplies under this contract will lead to the development of new designs that will replace obsolete subsystems, provide recommendations to reduce acquisition life cycle costs and improve reliability. The scope of work will involve the application of engineering disciplines required to analyze, design, fabricate and integrate hardware and software solutions for commercial off-the-shelf based subsystems that collectively provide capabilities to naval platforms. Work is expected to be complete by July 2021.