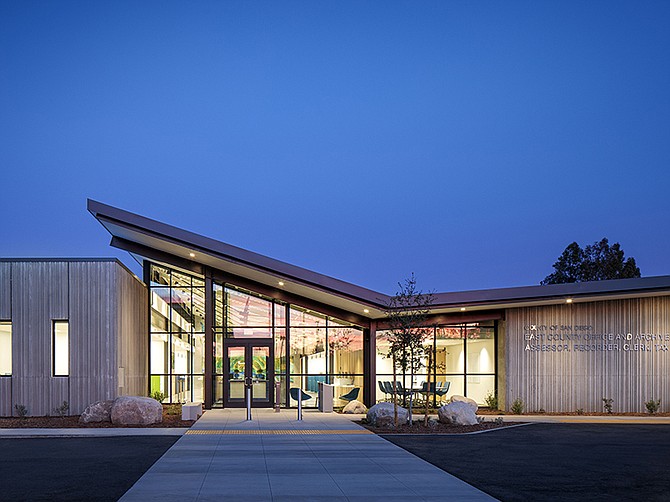 Photo courtesy of The Miller Hull Partnership. A $22 million county building has a special place for archives.

A new East County government building with the seemingly mundane task of storing documents is turning heads with its sleek design and care taken to make it a welcoming place.

“It is the East County front door to our government, so its’ important to be a place that people are proud of,” said Ben Dalton, principal at The Miller Hull Partnership, the firm that designed the project.

Key among them is preserving documents dating back to the earliest days of San Diego County, said Luis Peris, project manager for the county.

To do that, the architectural firm of Miller Hull Partnership designed two separate but connected vaults in the 8,500 square-foot archive wing of the building.

Each vault has strict controls on temperature and humidity to protect the documents, especially the older and more fragile documents and those that have been damaged.

The larger of the two is 5,300 square feet and has the temperature set at 60 degrees Farenheit with a relative humidity set between 42% and 52 %, Dalton said.

The smaller of the two at 875 square feet has a temperature set at 50 degrees with a relative humidity of 35 %, Dalton said.

“If you’re just standing there for a while, you’re going to need a sweater,” Peris said.

The archive section has its own generator, heating and cooling system and fire suppression sprinklers.

About 4,400 cubic feet of records dating back 170 years and microfilm have been moved into the building.

Before, county archives were kept in scattered locations around the county.

“This is the first time they’ll be in a building where the public can come and review documents, both historical and current, property records and things,” Dalton said.

The front of the building has a distinctive roof line. Peris described it as “almost like an inverted chevron.”

Dalton, who saw the front roof line as “sort of like a big check,” said it’s tilted south to increase the efficiency of rooftop solar panels and open up the interior of the building to the sunlight.

“All the exterior glazing was carefully designed with exterior shading to limit solar heat gain,” Dalton said, adding that the tilt up concrete construction of the building also reduces heat gain in the building, Dalton said.

The 3,000 square foot lobby itself is divided by what Dalton called an indoor public street, with county offices arrayed on each side along with a bank of self-service kiosks.

“We designed the space large enough that we hope in the future, they may be able to bring out some of the archive material and put it on display,” Dalton said.

At one end of the lobby is a mural by San Diego artist Christine Nguyen with an iridescent metal mobile sculpture, also by Nguyen, hanging from the ceiling.

The brightly-colored mural is meant to be a depiction of San Diego County at sunset from sea to mountains with the mobile sculpture reflecting some of the same colors used in the mural, Dalton said.

All public counters have adjustable work station stations that be raised and lowered to accommodate people with walkers or wheelchairs and workers that prefer to work standing up, Peris said.

“That way, every counter is an ADA accessible counter,” Peris said.

To help give the area a warm feel, Miller Hull chose pecan wood in some of the public areas.

“We particularly like the pecan wood because it has a very strong grain to it,” Dalton said. “You can really see the hard wood that’s in there.”

The building also has a special room for civil wedding that seats 30 people, and an outdoor arbor and trellis for weddings and other ceremonies.

“We outgrew the building. It was an old bank from the 1960s,” Peris said, that feel far short of modern requirements.

“It was a two-story building and it didn’t have an elevator,” Peris said. “None of the staff needed an elevator, thank goodness. Otherwise, I don’t know what we would have done.”

The new building is a one-story structure and about twice the size of the El Cajon offices, Peris said.

It was designed for LEED (Leadership in Design Energy and Environmental Design) gold standard certification and is net zero energy, meaning that it produces all its own energy in keeping with the county’s sustainability goals.

The building fully opened to the public March 12 then shut down March 15 because of the COVID-19 pandemic.

Since then, it’s open only by appointment, Peris said.

The project has been nominated for an orchid award in the San Diego Architectural Foundations annual Orchids & Onions review of the best and the worst of new building and landscaping design.

Calling the project “environmentally responsible,” the nomination noted that the building “is slated to be the first certified net zero archive in the U.S and LEED Gold certified” with a 140 kilowatt photovoltaic solar array that provides enough energy for the entire building with a 10 % buffer for future growth.

C.W. Driver was the general contractor on the project. Also working on the project were Latitude 33 Planning & Engineering and Schmidt Design Group.