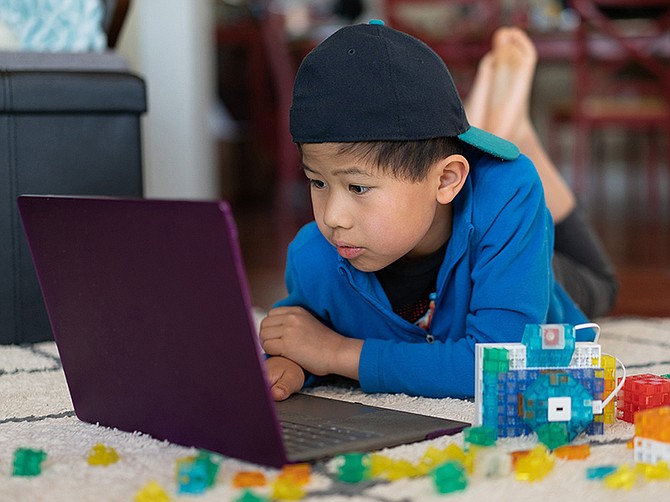 Photo Courtesy of Sony. Sony’s Koov coding kit can be used by four to five children at a time, ages seven and older.

San Diego’s Sony Electronics is getting into the STEAM education game with KOOV, a coding kit containing more than enough sensors, actuators, and electronic parts to bring blocky robots to life.

A KOOV kit contains blocks, motors and sensors kids can put together to create robots and small machines they can program. It can make classes a lot more fun and ignite kids’ interest in science, technology, engineering, art and math (STEAM) subjects.

Initially launched in 2018, the team decided to expand into the U.S. market after finding success with KOOV in Japan and China. KOOV is the first hardware product out of Sony’s Global Education wing.

Despite being a company with global reach, Sony has never been afraid to launch into a new category, according to Mike Fasulo, president and chief operating officer of Sony Electronics.

“It’s in our DNA, it goes back to our founders — Akio Morita and Masaru Ibuka, who came out of the post-war depression in Japan and wanted to come back to society focused on kids and education,” he said. “We are a 75-year young company, but we still carry a founder’s philosophy. Education has always been a critical part of all things we do.”

KOOV is already seeing early success, the goal is to expand the adoption of the kit to a districtwide standard.

Priced at $520, the KOOV is currently aimed at schools and learning centers in the United States. One kit can be used by four to five children at a time, ages 7 and older. Sony also launched a more affordable version of its robot coding kit, a KOOV Trial Kit priced at $250.

Sony routinely holds in-person events for teachers and coding students at its campus, however due to the coronavirus, the company began hosting virtual events to allow parents and children to learn about different STEAM career paths.

“Due to the coronavirus, we pivoted and launched STEAM Week which offers a new program every day of the week to help explore children’s curiosity,” said Araki. “Our objective is to introduce coding, robotics, and design to classrooms so that we can help nurture well-rounded, creative problem solvers and foster 21st-century skills.”

Today, it seems like practically every major technology company from Apple to Sony has an educational coding offering.

Apple recently partnered with several hardware makers to help teach its Swift programming language to kids. Lego also introduced a new Boost line, joining a number of others already produced by the company. On top of that, there are the dozens of startups fighting for a piece of market share.

It’s too soon to say whether Sony’s education business will become as significant as its other verticals. Although Sony’s executives are betting the investment will create a productive, profitable, and sustainable company going forward.

“The best innovation comes from different ideas and with that, comes diversity,” said Fasulo. “While there may not be a return on investment such as a profit and loss (P&L) on the business immediately, we’re going to attract talent to our company, diverse ideas, as well as help out with socioeconomic issues.”

In late April, Sony launched its $100 million Global Relief Fund for COVID-19 in support of various groups affected by the coronavirus crisis.

The company donated $10 million to the World Health Organization (WHO) to assist medical workers and other first responders.

Sony’s North America headquarters has over 3,000 employees and is headquartered in Rancho Bernardo. The company revenue was roughly $78 billion last year.