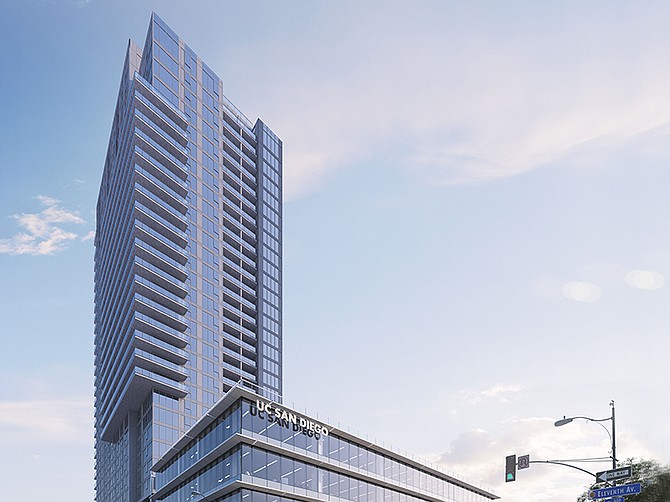 ll neighborhoods evolve over time. For East Village, the evolution is happening at breakneck speed.

The transformation of the eastern portion of downtown into something other than a warehouse district began with the San Diego Padres’ ballpark development. Petco Park was planned in the last part of the 20th century and opened in 2004. Since then, luxury apartment complexes as well as other types of buildings, including offices, have sprung up among vacant lots and 19th century houses.

The transformation continues. It won’t be the crack of the bat, but the life of the mind that promises to reshape East Village in a new way.

Already home to San Diego City College and the New School of Architecture, East Village’s educational bent will get more pronounced when UC San Diego opens its downtown center in the fall of 2021. The university will occupy a four-story structure at Market and Park Boulevard, recently built along with Holland Partner Group’s 34-story apartment tower, The Merian, at 11th and G streets.

While the exterior of the university building is mostly complete, the interior still needs finishing. The center was originally supposed to open in the spring, but for safety and planning purposes, it has been delayed until the late fall, according to a university spokeswoman.

The university predicts big things ahead.

“Unlike anything else in the region, our downtown center strives to be a pivotal intersection for our global research university to engage with people, ideas and plans to address the region’s biggest question: What’s next for San Diego?” said Mary Walshok, associate vice chancellor for public programs and dean of Extension at UC San Diego.

With special programs and events, UC San Diego will attract different people to the neighborhood, said Mike Stepner, professor emeritus at the nearby New School of Architecture. Because of UC San Diego, people who would not normally come to East Village will make the trip — and it will likely change their perspectives of the area.

The arrival of UC San Diego is “a really big deal for East Village and downtown,” said Betsy Brennan, CEO of the Downtown San Diego Partnership, a nonprofit serving businesses downtown. “It brings an innovation economy with a demographic that is highly desirable in a downtown.”

East Village is a place for highly educated people to both live and work, Brennan said. There are 10,000 residents of East Village and city planning documents call for housing 30,000.

Developer David Malmuth said that East Village has fundamental elements that developers, and the people who finance them, look for. Malmuth is one of the people who built the recently completed, $91 million IDEA1 housing and office block on F Street at Park Boulevard. He is involved in another project a short walk to the east.

San Diego is a growth city with a large population of millennials, Malmuth said. “People want to come here.” Its universities turn out great talent. For its part, downtown has small, walkable blocks and great access to transit.

“Companies realize they want to be where the talent pool wants to be,” he said. “I like the long-term prospects for East Village. … All of that, to me, says it’s a good place for development — and capital agrees.”

Developer Jason Wood sees potential in East Village too. Wood is a principal in Cisterra Development, which has already contributed to the new face of East Village. Cisterra built DiamondView Tower adjacent to Petco Park, as well as Sempra Energy’s new high-rise headquarters a short distance north of the ballpark.

Cisterra plans to follow that with two sizable projects. It plans to break ground on its Cisterra 9G project — named for the two streets that intersect nearby — during the first quarter of 2021. It is looking to the spring of 2023 to finish the building, slated to have a two-floor Target store and 241 apartments for a total of 255,000 square feet. Carrier Johnson + Culture is the architect.

Carrier Johnson also designed a larger project for Cisterra. At 763,000 square feet, the 7th & Market high-rise complex will feature a Ritz Carlton hotel plus 59 residences associated with the hotel, as well as a specialty grocer, apartments and office space. Construction is expected to start by next summer with an opening is anticipated in 2024.

“I’m excited to get them going,” Wood said. “I look forward to having them under construction and delivered.”

A Foot on the Brake Pedal

Naturally, downtown developers are trying to contend with COVID-19.

“It’s definitely had everybody hitting the brake pedal a little bit,” Wood said. Whether development will simply slow or come to a halt has yet to be seen. Wood said he hopes for the former. He reported that people financing development projects are subjecting them to greater analysis than usual.

Brennan of the Downtown San Diego Partnership said she has seen construction projects continue without pause, though she has seen the financing process slow.

Pandemic or no pandemic, East Village retains a certain energy in its newly developed sections. On a recent Saturday evening, diners were seated outside restaurants on J Street on impromptu patios — streets and sidewalks walled off by sections of concrete K-rail. The Quartyard beer garden, formed by shipping containers placed at Market and 13th streets, had groups of people enjoying beer. People were out for a run or taking their dogs for a walk. A restaurant in Malmuth’s IDEA1 building was serving Mexican food.

Malmuth is at work with partners on another nearby project, dubbed the “SuperBlock,” bounded by 15th and 16th as well as E and F streets. The vision is for creative office space. Both SuperBlock and IDEA1 are part of what promoters call the I.D.E.A. District. The abbreviation stands for Innovation, Design, Education and Arts.

There are plenty of other projects in process in East Village. Another Carrier Johnson-designed complex, Jefferson Makers Quarter, will soon go up on a recently cleared site near San Diego Police headquarters, between 15th, 16th, Broadway and E streets. It will have 368 residential units.

A 1-acre park called East Village Green, with a recreation center, is expected to break ground in the coming year, Brennan said.

The city has requested proposals to redevelop the parking lots east of the ballpark, an area the city is calling the East Village Quarter.

Against this backdrop, UC San Diego is working toward the day when it can open its East Village center.

The facility will contain a mix of public, meeting, arts and educational spaces. The first floor will have community and event space as well as a restaurant. The second floor is being prepped for a gallery and arts space. The third floor will be a mix of university and partner programs, courses, meeting space and activities. UC San Diego said it will reserve its fourth floor for its community partners.

The university said it plans to engage the community, students and alumni by offering learning, collaboration, civic and cultural experiences in its new building. Programs will be geared toward people of all ages; university leaders spoke of youth science programs, business executive training and post-retirement learning opportunities.

“The economic and cultural changes created by the coronavirus pandemic have made us even more committed to creating a place for a cross-section of our vast community to gather, learn, collaborate and prosper together in downtown San Diego,” said UC San Diego’s Walshok. “We want to contribute to everything that is vibrant and vital about that pivotal East Village corridor.”

Workforce development will be an important theme at the center, according to a spokeswoman.

“Through economic research, business partnership, university education and training, the center will be uniquely capable of connecting our region’s richly diverse, untapped talent pool with the skills they need most,” said Sophia Eichner, project director of UC San Diego Downtown Center. She added that national research suggests that up to 40% of pre-coronavirus jobs will not return with the new economy.

UC San Diego seems to have plenty of reasons to like East Village, including a transportation benefit.

Construction firms are pushing the network of San Diego’s trolley tracks north. Once the new line is complete in 2021, a student will be able to take the trolley directly from the main UC San Diego campus on Torrey Pines Mesa to the front door of the East Village center.