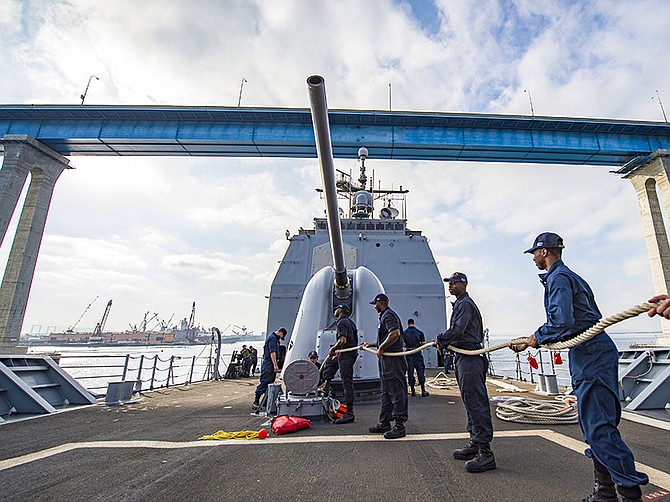 Photo courtesy of U.S. Navy. Sailors work on the cruiser USS Lake Erie as it transits San Diego Bay in 2016. General Dynamics NASSCO has a $37 million contract to repair the ship and perform maintenance on it.

The following are selected defense contracts awarded to San Diego County companies in late July. They have been announced by the U.S. Department of Defense or the contractor itself.

The U.S. Navy awarded General Dynamics NASSCO a $37.2 million contract for maintenance, modernization and repair of the USS Lake Erie, a Ticonderoga-class cruiser. This contract includes a base period and options which, if exercised, will bring the cumulative value of this contract to $63 million. This is a “long-term” availability and was open to shipyards on the West Coast, without limiting the place of performance to the vessel’s homeport. Work is expected to be completed by January 2022. This contract was competitively procured via the Federal Business Opportunities website and three offers were received. The Naval Sea Systems Command (NAVSEA) of Washington, D.C. awarded the deal on July 31. The award was announced on Aug. 5.

The U.S. Navy awarded General Atomics an indefinite delivery, definite quantity contract for submarine demonstration hardware. The deal has a $32.3 million ceiling over five years. Work will be performed in San Diego. The contract will provide for the manufacturing design drawings, engineering, fabrication, inspection and assembly of prototype submarine components, as well as the equipment required to support proposed research and development, testing and evaluation. The first task order is expected to be completed by June 2022. This contract was competitively procured via the Contracting Opportunities website, and four offers were received. The Naval Surface Warfare Center, Carderock Division of West Bethesda, Maryland, awarded the contract, announced on July 30.

The U.S. Navy awarded Northrop Grumman Corp. a $24.3 million deal for equipment that foils roadside bombs by jamming radio signals. The electronics are known as JCREW (Joint Counter Radio-Controlled Improvised Explosive Device Electronic Warfare Increment One Block One). The deal is a modification to a previously awarded contract; specifically, it exercises an option for support equipment and spares (both at the operational level and the depot level). This contract option combines purchases for the Navy (12%) and the government of Australia (88%) under the Foreign Military Sales program. Work will be performed in San Diego and is expected to be complete by June 2022. The Naval Sea Systems Command of Washington, D.C. awarded the deal, announced on July 30.

The U.S. Navy awarded Heffler Contracting Group an indefinite delivery, indefinite quantity contract for electrical work. The five-year deal has a ceiling of $24 million. Heffler, a small business based in El Cajon, will now wait for task orders under the contract. Work will be performed at various locations within Naval Base Coronado, Naval Base Point Loma, Naval Base San Diego and Marine Corps Air Station Miramar. The work to be performed provides for the minimal design, installation, supervision, equipment, material, labor and all means necessary for new electrical work, additions, alterations, maintenance and repairs of electrical systems. This contract was competitively procured via the beta.SAM.gov contract opportunities website and eight proposals were received. The Naval Facilities Engineering Command Southwest in San Diego awarded the deal, announced on July 30.

The Department of the Navy awarded Bilbro Construction Co. Inc., a small business based in Escondido, a $10.6 million task order under a multiple award construction contract for the repair of a firefighting operations facility at Marine Corps Logistics Base Barstow. The task order also contains two planned modifications, which if issued, will increase the value of the task order by approximately $44,000. Under the deal, Bilbro will renovate Building 322 into a fire station to house a consolidated headquarters and satellite fire station with the emergency vehicle fleet. The renovations will create administrative spaces, meeting spaces, equipment storage, vehicle maintenance bay spaces and bunkrooms for firefighting personnel. The work will also include seismic retrofit upgrades. The planned modifications, if issued, provide for furniture, fixtures and audio-visual equipment. Work is expected to be completed by February 2022. Five proposals were received for this task order. The Naval Facilities Engineering Command Southwest in San Diego awarded the deal, announced on July 30.