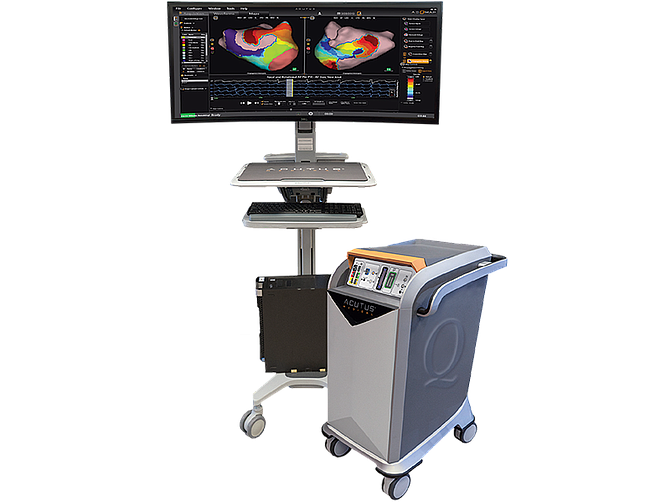 Acutus Medical (NASDAQ:AFIB), a tech company that develops tools for catheter-based ablation procedures to treat a range of heart arrhythmias, has raised $183 million for its initial public offering last week.

The IPO was led by JP Morgan, Bank of America, and Merrill Lynch.

The new financing will be used to further product refinement, R&D and commercial expansion. The company also plans to expand its salesforce, commercial leadership and clinical specialists over the next several years.

Great timing as the company began the process of planning for its IPO in Q1 earlier this year, shortly before the global pandemic hit in March.

“It was a highly successful IPO. We actually upsized in the midst of the marketing process on the initial public offering due to excitement around our story,” said Vince Burgess, president and CEO of Acutus Medical. “This is one of the largest IPOs in terms of amount raised in the emerging medical device sector, ever.”

Headed by President and CEO Burgess, Acutus Medical is a maker of 3-D imaging technology for heart procedures.

The company’s flagship product, AcQMap, creates a virtual map of the heart chamber. It updates in real time with each heartbeat, aiding in cardiac ablation, a procedure used to treat an irregular heartbeat, or arrhythmia.

Its system provides ‘unmatched speed and precision’ in mapping the drivers and maintainers of arrhythmias, according to the company.

Burgess said AcQMap’s system is superior to older devices that must contact the heart in one place at a time, which takes more time and may miss spots. AcQMap was first commercialized in Europe and was used in the U.S. for the first time in 2018.

AcQMap contrasts with a decades-old method that stitches together electrical impulses to get an imprecise view of the heart. With AcQMap, doctors can see the effects of their work instantaneously.

“We’ve spent the last 10 years inventing, developing, and refining a completely new way to map the heart. We also rolled out a pilot basis for the last couple of years, primarily in Europe to refine our products,” said Burgess. “We’ve now iterated and refined our products to the extent that we’re ready for a full market launch. Which we hired a large commercial and clinical organization to support in the back half of last year.”

The most common type of arrhythmia, called atrial fibrillation, affects an estimated 2.7 million to 6.1 million Americans, according to the Centers for Disease Control and Prevention. It can cause blood clots, stroke, heart failure and other complications.

The global market for cardiac ablation is believed to have grown at a CAGR of 12.5% from 2014 to 2019, according to a 2020 market research report by MarketsAndMarkets. Meaning more of a market for Acutus.

Acutus currently has device installations in high stature institutions such as Oxford, Cambridge in the UK and UC San Diego, and several universities on the East Coast.

Acutus also partnered with Peerbridge Health to offer a wireless system called the Peerbridge Cor for detecting cardiac arrhythmias. This allows patients at risk to have freedom of movement along with continual monitoring.

In terms of acquisitions, the company recently purchased Rhythm Xience, a maker of FDA-approved devices to gain access to the heart.

Before Acutus, Burgess headed Volcano, a global biotech company purchased by Philips in 2014 for $1.2 billion. He joined the firm in 2013 as a board member and was previously a venture partner OrbiMed, a life science venture capital firm.

Acutus a venture-backed company prior to the IPO, Acutus had raised over $148 million from investors including OrbiMed Advisors, Deerfield Management, Advent Life Sciences, AMXeraya, Revelation Alpine, and CVF 2018. To date, the company has raised $308.2 million in venture capital, according to Crunchbase.

Headquartered in Carlsbad, the company has 220 employees.

“We have either developed on our own, acquired through M&A transactions, or in-licensed distribution rights of diagnostic and ablation catheters. As a result, we’ve assembled a complete electrophysiology company here in Carlsbad. We are trying to bring some much needed innovation and change into this field,” said Burgess.