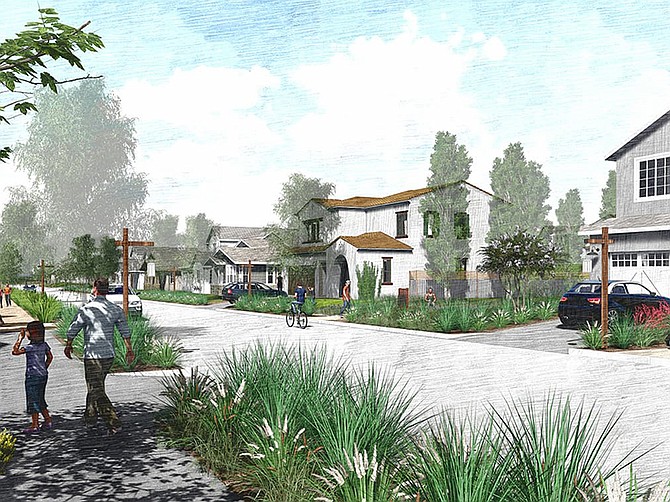 Rendering courtesy of Integral Communities. North River Farms is a housing development planned for Oceanside near the back gate for Camp Pendleton.

A Newport Beach-based developer is proceeding with plans for a $375 million housing development in Oceanside while trying to fend off a November ballot challenge to the project.

Integral Communities, which has San Diego County offices in Encinitas, hopes to break ground on its proposed North River Farms development in what has historically been an agricultural section of Oceanside sometime in 2021.

“If we’re lucky, if we’re successful, we could start as early as March of next year,” said Lance Waite, a partner in Integral Communities.

The company has been working on the project since 2014 and has an option on a 215-acre site in the Morro Hills section of Oceanside. Integral Communities has three years to exercise its option to buy the property, Waite said.

The company plans to build a 585-home farm-themed community.

The Oceanside City Council approved the North River Farms project in late 2019. Critics said the project was urban sprawl. They succeeded in collecting enough signatures to place the matter on the November ballot but Integral Communities has filed a lawsuit challenging the ballot measure.

Meanwhile, Integral is going ahead with permitting and developing plans for the roadways, water and sewer lines and other infrastructure associated with the project, Waite said.

“For us, it’s interesting times,” Hammond said. “We’ve seen the pandemic come forth. With that, there was a period where we wondered how that would affect the housing market.”

Rather than dampening the market as was first feared, “We’ve seen single family home sales increase 30 % during the pandemic,” Hammond said. “People are looking to their homes as a place to shelter, a place of refuge.”

Among the off-site improvements Integral Communities would make as part of the project are widening a segment of College Boulevard to six lanes, widening North River Road to four lanes, and installing an 18-inch reclaimed water line into Moro Hills, said Ninia Hammond, project manager.

The homes would be priced from about $500,000 to about $800,000 Hammond said. The project also would include an affordable apartment complex of 60 flats.

Because of its proximity to the back gate of Camp Pendleton, she said the development also would likely attract active and retired military.

In keeping with its farming theme, North River Farms would have a 68-acre farm along North River Road with a 2,000 square-foot education center operated by The Ecology Center of San Juan Capistrano.

The architect on the project is Summa Architecture of Bonsall with SWA Group of Laguna Beach as the land planner.

In addition to North River Farms, Integral Communities is planning a $200 million redevelopment of the former Palomar Health hospital in Escondido into a residential community.