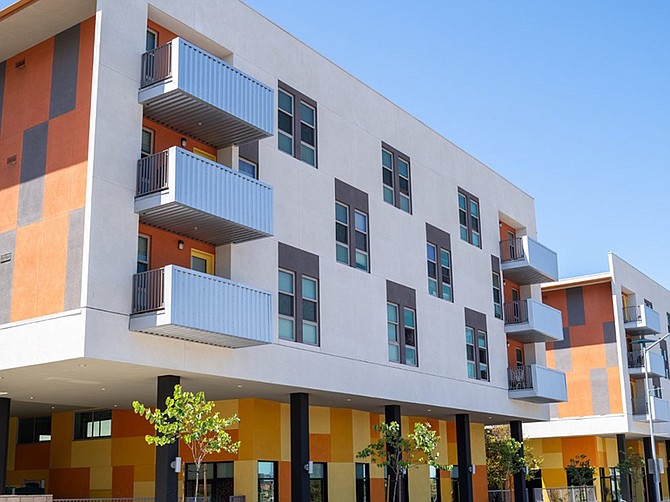 Photo courtesy of the San Diego Housing Commission. A $24.7 million affordable housing project has been built in Encanto south of the 94.

A $24.7 million affordable housing project developed by National Community Renaissance in partnership with the San Diego Housing Commission has opened in Encanto as part of a drive to improve what officials said was a run-down neighborhood.

The two-building project at 6315 Imperial Ave. has 66 apartments – eight of which are designated for formerly homeless veterans.

Not including a manager’s apartment, the rest are for low income families.

The 88,334 square-foot project also includes 5,000 square-feet of commercial space which Seymour said will be leased to nonprofits and area businesses.

Demand for the apartments was intense.

More than 1,400 people had applied for the apartments, according to National Community Renaissance

So far this year, 187 affordable apartments have opened in San Diego, according to the Housing Commission.

In 2019, the commission added a total of 856 affordable apartments to the city’s housing stock.

Encanto Village apartments are open to people earning up to $69,300 for a family of four, which is 60% of the area median income.

A chance to save

“This project represents housing as a right, social justice and an opportunity for college - a place to unburden those with heavy rent and at risk of homelessness as well as a pathway to wealth creation,” Seymour said. “Residents who live here paying less for rent have a great opportunity for home ownership which is extremely important in this neighborhood and surrounding neighborhoods.”

Social services at Encanto Village are provided by Hope Through Housing Foundation, an affiliate of National Community Renaissance.

The U.S. Department of Veterans Affairs will provide services to veterans living in Encanto Village.

Built on a nearly 1.2-acre lot with a bright yellow, orange and white façade, the four-story Encanto Village stands in contrast to other buildings along Imperial Ave.

The project was designed by Studio E Architects with open walkways that allow for natural light and ventilation.

Amenities in the project include two gardens, courtyards, a community center, a computer center, an outdoor play area, a laundry room and electric vehicle charging stations.

Encanto Village is considered a transit oriented development because it’s across the street from the Encanto/62nd Street trolley station.

Before construction of the apartments, new drainage pipes were installed below the site to replace the original drainage system.

The site of Encanto Village was originally six separate parcels of land with 12 different owners.  National CORE worked with community organizations such as the Diamond District Association in negotiating the purchase of the property.

A challenge for the architects was balancing a high-density design without overcrowding the limited space.

To do that, the architects opted to go with two buildings and with small courtyards and other community area breaking up the space in the buildings.

An arcade along the ground-floor retail spaces was designed to bridge the street with the buildings and create a sense of depth and space.