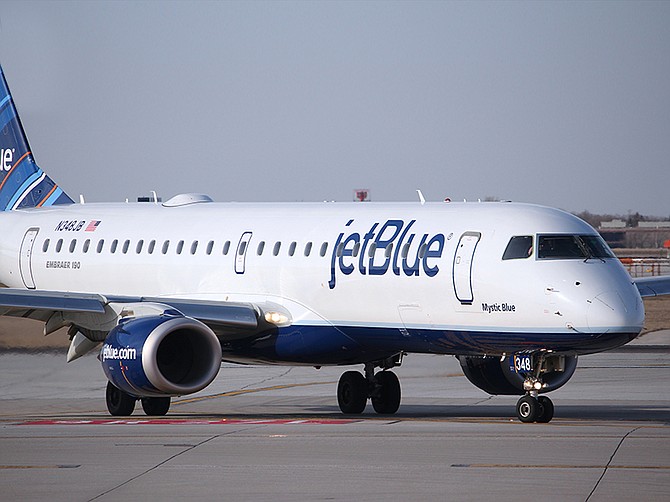 On Aug. 4, it added a new nonstop route to Santa Barbara also via Alaska.

And, on Aug. 6, it launched a nonstop JetBlue flight to Newark Liberty International Airport in Newark, New Jersey.

These are just some of the latest flight additions as a result of the airport’s strategy to retain and regain the routes it has lost due to COVID-19. As part of the recovery effort, the San Diego County Regional Airport Authority, the agency that operates the airport, has partnered with the San Diego Tourism Authority and the World Trade Center San Diego, an affiliate of the San Diego Regional Economic Development Corporation (EDC), to better understand the community’s future travel needs. It has also been involved in extensive conversations with government agencies in attempt to better understand travel restrictions and, hopefully, make San Diego a gateway city for international service.

“Our air service strategy right now is to add where we can, but prioritize retaining what service we have, and work with both our domestic and international airline partners to rebuild what was lost,” said Hampton Brown, interim vice president of marketing and innovation at the airport. “We know it may take a few years before we fully recover, and we also know that getting back to 2019 passenger levels will be a combination of regaining markets that were lost and supplementing ones we aren’t able to get back as quickly.”

In coordination with the World Trade Center, Brown said the airport distributed a survey to local businesses to assess their future travel needs. What has been learned from the gathered data is that the business community wants nonstop services out of the airport, he said, to minimize time traveling to neighboring airports and to maximize time conducting business. Thus, the information is being used to help the airport focus on routes and destinations that are most desired in the community.

“We are responding to that with our air service strategy, prioritizing the preservation of existing nonstop links and adding new ones where possible,” Brown said. “We also know from industry experts and surveys conducted at the national level that business travelers will prefer nonstop service more than ever post COVID-19.”

The San Diego County Regional Airport Authority along with the Tourism Authority and the World Trade Center also asked those business owners it surveyed to engage in a letter-writing campaign. The initiative, Brown said, will be used to plead the case for nonstop international flights out of SAN, which are currently suspended due to the pandemic-related government restrictions.

Once collected, the letters are sent to Airport Authority President and CEO, Kim Becker, who will then share them with Japan Airlines, British Airlines and Lufthansa, he said. The letters specifically address the need for the routes those airlines serve, said Brown, and ask they consider resuming service as soon as possible.

“We are in constant communication with our airline partners, sharing with them the community need for routes that connect San Diego to various destinations around the world,” she said. “Since mid-March, we’ve had three airlines add new service which is a positive sign for our community. We know San Diego is a strong destination market for business and leisure travel and we are thankful for our current airlines partners’ continued commitment to serve the more than 7.1 million people that our airport reaches.”

The last piece of the airport’s recovery puzzle is to better understand the United States Department of Homeland Security’s gateway cities restrictions.

On March 13, Homeland Security restricted American citizens, legal permanent residents and their immediate families who are returning home after visiting certain European countries, China, Iran and Brazil to travel through 15 U.S. airports, also known as gateway cities. San Diego is not one of them.

In response, Brown said the airport’s government relations and air service teams have been working through its industry trade organization, Airports Council International-North America, to better understand what these restrictions mean and when they might be lifted.

“Should the restrictions continue,” he said, “the team is advocating for the airport to be included in the lists of ‘gateway’ cities. These are not decisions the airport can make, but rather, must be made at the federal level.”

Nikia Clarke, executive director at World Trade Center San Diego and vice president of economic development at the EDC, said the Airport Authority has worked aggressively over the past five to eight years to expand international service to San Diego. The World Trade Center has been a key partner on that front with them, she said, adding that obtaining the gateway designation is imperative toward the recovery of the local economy.

“According to national data, on average, when you open non-stop service between two international markets, there is a 20% increase in investment from the foreign market into the city,” she said. “As an economic development strategy, it makes sense to increase the international connectivity because it increases investments and creates jobs locally. San Diego is too large of a market not to have this designation.”

So far, as numbers indicate, these purposeful tactics are being effective.

In February, the airport had 70 nonstop destinations, including 11 nonstop international routes and two Canadian markets slated to begin spring/summer. By the end of May, nonstop flights were down to 27 and all international service had come to a halt. As of August, that number is up to 54 nonstop destinations, including two routes to Mexico and a third one in the queue.

Despite the latest industry forecast predicting it may take until 2024 for tourism to return to 2019 passenger levels, Julie Coker, president and CEO of the San Diego Tourism Authority, said she is hopeful the airport will see substantial improvement much sooner.

“The goals and timelines for additional routes is based on a number of factors, including market demand, customer confidence, the federal government’s guidance and the lifting of its travel bans,” she said. “Airlines will not bring back international routes until they know they can be profitable, and they can only be profitable if the federal government lifts its bans. (The number of routes added) is going to depend on our efforts to curb the pandemic, including the development of a vaccine, customer demand and guidance from the federal government. My hope is that we are well on the path to recovery by the end of the year.”

For Brown, it begins with San Diegans choosing local.