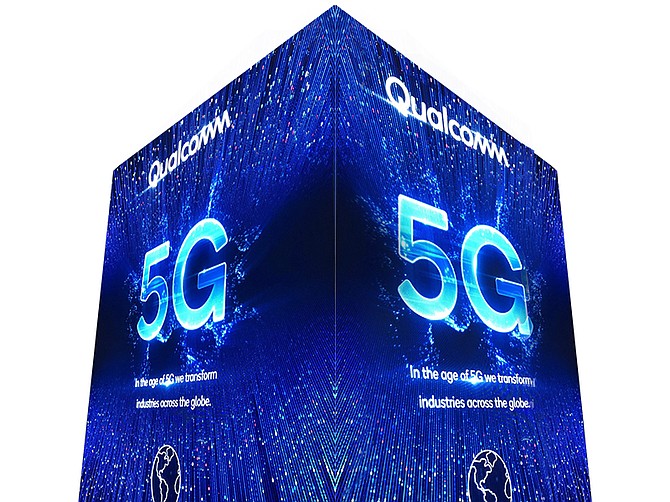 Photo courtesy of Qualcomm. Qualcomm is a leader in 5G technology.

Qualcomm’s victory in a high-stakes battle with the U.S. government leaves the smartphone chip giant with open roads for a period of consistent growth propelled by rising demand for new 5G technology.

On Tuesday, Aug. 11, Qualcomm, Inc. won its appeal after the court’s decision to vacate an antitrust ruling, resolving one of its last outstanding issues which sent shares close to a record high of $116 on Aug. 12.

The company emerges from what has been an unusually tumultuous five-year period compared by most corporate standards.

Rather than being damaged, the San Diego company has escaped from the lawsuit largely unbruised. It has also become a kind of national champion in the Trump administration’s competition with China over technology, particularly in 5G networking.

The ruling was described as a “huge win for San Diego” after five years of uncertainty and shareholder anxiety, said Prakash Sangam, an analyst at Tantra Analyst. The company can now move forward and prepare for 6G, he said.

Qualcomm executives see the company as being poised to benefit from wider global uptake of the technology as well as new product launches like Apple’s first 5G iPhone, which is due before the end of the year.

Last month, Qualcomm Chief Executive Steve Mollenkopf said the company expects sales of 5G handsets will likely come in at the high end of a projection of between 175 million to 225 million units this year.

“We are anticipating the next inflection point in our 5G ramp to start in [the September quarter], with strong year-over-year growth in revenue and earnings per share, leaving us well positioned for continued growth in fiscal year 2021,” he said.

In the past, technology companies such as Microsoft, Facebook, Amazon and others have also faced issues like antitrust claims, however, none have experienced as many obstacles in as compressed of a timeline as Qualcomm.

The case dates back to the final days of the Obama administration, when the FTC sued Qualcomm and challenged a central company practice the commission described as “no license, no chips.”

In May 2019, a federal judge claimed that Qualcomm had abused its monopoly position in wireless chips and overcharged mobile phone makers for its patents. The crux of this issue was Qualcomm’s practice of earning revenue both from patent royalties as well as chips.

A lawsuit followed when the Federal Trade Commission said Qualcomm enjoyed monopolies in two types of modem chips and adopted a framework in which phone makers couldn’t purchase those chips for their devices unless they also paid to license Qualcomm patents covering a range of its intellectual property.

Given that structure, it made it difficult for phone makers to challenge Qualcomm’s royalty rates, and the arrangement also meant those manufacturers were paying Qualcomm royalties even if they used a competitor’s chips in their phones.

The case had been supported by Apple, Samsung and other companies who had also accused Qualcomm of overcharging for access to its patents.

If they had lost, the court would require Qualcomm to renegotiate billions of dollars worth of agreements with smartphone makers, and be forced to stop charging its customers to pay an additional licensing fee. The company would have also needed to restructure its business, denting a highly profitable patent royalty division.

The antitrust verdict in the case posed a major threat to the San Diego company’s lucrative patent licensing business.

Patent royalties have been a leading driver of Qualcomm’s success in the smartphone era. They account for about 60 percent of the company’s profit and fund a significant portion of its research and development efforts.

The bulk of its revenue comes from licensing patents that form the foundation of how all modern phone systems work. It charges fees that are calculated as a percentage of the selling price of handsets and paid by the phone makers.

Although the company earns most of its revenue from selling chips, its licensing division has much higher margins and accounted for more than half of its earnings before taxes in its latest quarter.

Qualcomm said it achieved its market position lawfully, developing and investing in breakthrough technologies, an argument accepted by the appeals court. The company also stated its licensing practices were well-grounded because every cellphone invariably uses its patented innovations.

In the ruling, the three-judge panel of the U.S. Court of Appeals for the Ninth Circuit reversed that 2019 ruling and threw out that verdict entirely.

The San Francisco-based court ruled unanimously that the Federal Trade Commission hadn’t shown that Qualcomm’s core business practices related to its cellphone chips and patents were anything more than lawful attempts at profit maximization.

“We decline to ascribe antitrust liability in these dynamic and rapidly changing technology markets without clearer proof of anticompetitive effect,” Judge Consuelo Callahan wrote in a statement.

The appeals court also vacated an order that the company redo licensing accords with smartphone makers like Apple Inc. and Samsung Electronics Co. Such licenses generated $4.6 billion in revenue for Qualcomm last year.

Don Rosenberg, Qualcomm’s general counsel, called the decision a validation of the company’s business model that underscored the contributions the company had made to the industry.

“The Court of Appeals’ unanimous reversal, entirely vacating the District Court decision, validates our business model and patent licensing program and underscores the tremendous contributions that Qualcomm has made to the industry,” said Rosenberg in a statement.

The decision served as a major victory for Qualcomm, and its shares initially jumped more than 4%. Since mid-March, Qualcomm shares have risen more than 80% to a record high, valuing it at $125 billion.

Anshel Sag, analyst at Moor Insights & Strategy said locally many people tend to forget how much share pricing can affect a region from an economic standpoint.

“Whether they are current or former Qualcomm employees that have a ton of stock in the company, with the stock price increasing like it has, it increases people’s wealth and gives them an opportunity to spend money locally in the region as well,” said Sag.

While the company is still facing an investigation from European antitrust authorities, the decision removes one of the last major hurdles after several years of monumental business and legal challenges.

Sangam said many people within the technology industry now have a better understanding of Qualcomm’s business, as a consequence of following this case.

“This case has better informed people in the overall technology industry of how things exactly work,” he said. “A lot of people didn’t understand how things work in the cellular industry and now there has been a ton of education, which has been very interesting to witness.”

In recent years, Qualcomm has also faced pressure from an activist investor and prominent disputes with customers, including Apple, which filed suit over the company’s licensing practices at around the same time the FTC challenged them.

Qualcomm and Apple settled their differences out of court last May. The settlement gave the chipmaker a $4.7 billion revenue boost.

Other semiconductor competitors with a local presence include Huawei, MediaTek, and Intel, all who remain in close proximity to Qualcomm.

All remain in close proximity because of Qualcomm’s wireless dominance, said Sag, noting that if Qualcomm would have lost this case, the economic impact on San Diego would have been quite devastating.

“The impact is much bigger than just Qualcomm, there are a lot of outside third parties in the Sorrento Valley area that kind of feed off of Qualcomm’s wireless dominance because they have an entire wireless ecosystem around them. They would have had to downsize pretty significantly due to less profit coming in as well as reduce their spend in regards to research and development. This also might have affected how they plan for 6G,” said Sag.

To date, Qualcomm now has more than 660 devices announced or in development with its 5G Snapdragon semiconductors, up from 375 devices in March.

Looking ahead, Qualcomm forecast revenue of $7.3 billion to $8.1 billion for the September quarter under Generally Accepted Accounting Principles, which includes the Huawei settlement. Earnings are forecast at $2.12 to $2.32 per share.

Huawei, the world’s largest smartphone maker recently signed a long-term patent licensing agreement with Qualcomm, and Qualcomm is lobbying the Trump administration for approval to sell 5G chips to Huawei.

Excluding the $1.8 billion gain from Huawei, Qualcomm predicts sales of $5.5 billion to $6.2 billion for the September quarter.

Headquartered in Sorrento Valley, Qualcomm is the largest maker of chips that run the computer and radio communication functions in smartphones. The company employs more than 37,000 employees globally.