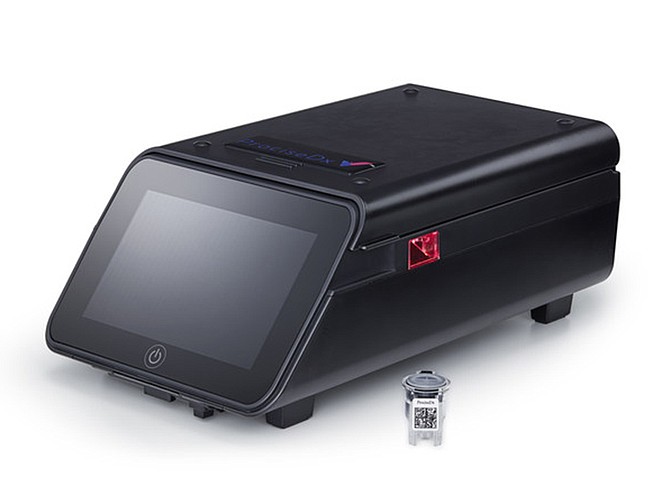 ProciseDx, a startup developing point-of-care diagnostics, has raised $10.5 million in its series A round after making significant progress in its gastrointestinal tests.

The financing round was led by Biosynex, a French diagnostics company, alongside several management and private investors. The funding will be used to build out ProciseDx’s gastrointestinal (GI) portfolio by adding a fourth test as well as start working on non-gastrointestinal tests.

ProciseDx had developed a large portion of the tests when it was still a part of Nestle, a Swiss-multinational food and drink processing conglomerate. In June of 2019, ProciseDx spun out and became a standalone company after it sold Prometheus Laboratories.

Led by CEO Larry Mimms and President Peter Westlake, the company’s aim is to make and commercialize point-of-care diagnostic tests for use in physician offices, retail clinics and urgent care.

“What we’ve done over the last four years, is a combination of technology development, building the team, organization and commercializing,” said Westlake. “We see ourselves as unconventional, as we develop the technology and take it to market ourselves.”

Currently in the commercialization phase, ProciseDx’s tests come with a turn-around time of only two to five minutes. Focused on GI physicians (gastroenterologists), its tests use finger prick blood or stool samples to provide immediate accuracy.

In the pipeline, the company is also launching a Therapeutic Drug Monitoring of Infliximab, Adalimumab and C-reactive protein (CRP), each test from fingerstick whole blood.

The company plans to launch its FDA-approved instrument in Europe this year and with hopes to then bring those tests to the US. The company has filed for 510(k) for its testing instrument.

“The test consists of an assay and an instrument. We are going to be launching in Europe this year and we are also going to bring those tests to the U.S. We have designed and built an instrument to be FDA ready,” said Westlake. “We’re looking at markets where we can generate up to a million tests a year in GI.”

The company believes that its real-time measurement of Infliximab and Adalimumab will dramatically improve the monitoring of inflammatory bowel disease patients under biotherapy and will generate significant drug cost savings. ProciseDx will also offer a Fecal Calprotectin assay.

It is partnering with Biosynex — it has a 37% stake in ProciseDx and will join its board. The French point-of-care diagnostic company made the investment because they’re interested in adding instruments to their lateral flow of portfolio tests while having access to a very experienced U.S. team.

In addition to the distribution relationship, ProciseDx will serve as the FDA agent and U.S. distributor for the Biosynex COVID-19 BSS Antibody test for which an Emergency Use Authorization file has been submitted.

“We are pleased to make this investment in ProciseDx which adds capability of quantitative rapid instrument based immunoassays to our strong portfolio of lateral flow tests marketed in France and Europe,” said Larry Abensur, CEO of Biosynex. “Our partnership with ProciseDx will also accelerate our commercial development in the U.S. for some of our key products, thanks to the tremendous experience of the ProciseDx team and their track record of FDA approvals.”

Westlake said the company isn’t focused on developing a COVID-19 antibody test at this time.

Mimms was the formerly chief scientific officer at Prometheus Labs. Prior to that, he led product development for Human Longevity and was vice president R&D for Quidel Corp. Westlake, former chief financial officer of Prometheus Labs, brings over 25 years finance and transaction experience.

In total, its management team has over 150 years of in vitro diagnostics (IVD) experience, having developed and commercialized several successful products.

In Europe, ProciseDx is in the process of signing up distributors, partners have not been disclosed. Meeting all EU’s health, safety and environmental regulations, the company will be launching in France, Switzerland, Italy and Spain in Q3 this year.

Looking ahead, the company expects to expand into a dozen countries, including the U.S. Headquartered in Sorrento Valley, ProciseDx employs 28 and expects to grow up to 50 staffers over the next several years.

Depending on the speed of the European commercialization and development of its U.S. antibody tests, Westlake said a series B round could be right around the corner, as early as the beginning of 2021.