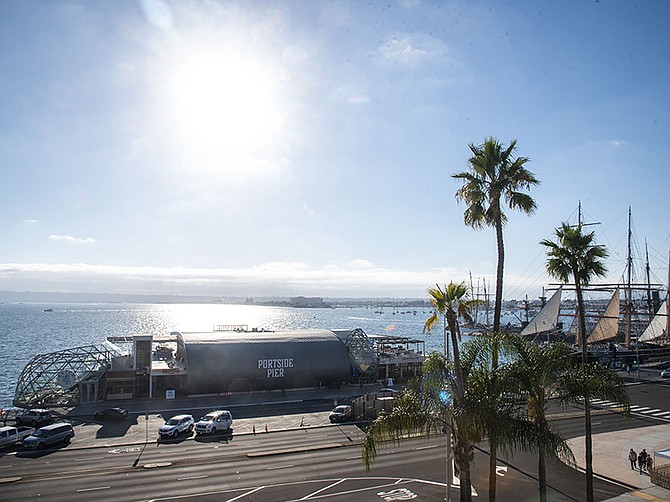 Photo courtesy of the Port of San Diego. The Brigantine’s Portside Pier opened in July and takes the place of the old Anthony’s site.

The $25 million, multi-year transformation of the Portside Pier at the hands of veteran San Diego-based hospitality group The Brigantine, Inc., is now complete.

And, while it opened just two weeks ago in the midst of the pandemic, operators are already encouraged by The Brigantine’s Portside Pier’s reception so far and are confident it will generate the projected $26 million in annual revenue – when the COVID-19 smoke finally clears.

“We’ve been very blessed with the overwhelming response and being right on the Embarcadero with thousands of people that walk by every day,” said Michael Morton, Jr., president and CEO of Brigantine, founded in 1969 and with revenue of roughly $67 million in 2019. “We’ve had incremental growth each day and the weekends have been tremendous. It has been a really positive trend so far. Based on response during COVID up to now, as soon as things get back to normal, I definitely think (the projected revenue of $26 million) is achievable.”

Although opening and operating during the pandemic, the vast amount of outdoor space at the Portside Pier has been extremely beneficial to its growth so far, according to Morton Jr.; about one-third of the property is outdoors, he said, and can sit up to 108 visitors on the viewing deck.

“Despite the challenges we are all facing in these unusual times… Portside Pier and its restaurants enhance the aesthetics of the waterfront with a unique architectural structure and provide locals and visitors with new experiences and dining options to enjoy,” said Rafael Castellanos, commissioner at the Port of San Diego Board of Port Commissioners. “In addition to great food and drinks, we’re thrilled to give the public another place to take in remarkable, panoramic views of San Diego Bay and perfect San Diego sunsets.”

Before The Brigantine’s Portside Pier, Anthony’s Fish Grotto, along with two other Anthony’s owned restaurants, were housed in the same location since 1965. In May 2015, the Port of San Diego decided not to renew its lease and put out a request for proposal (RFP) for a new operator, according to Morton Jr.

The list of potentials was narrowed down to six and then to two, he said.

In November 2015, The Brigantine was announced the winner. In 2017, the old Anthony site was demolished and in July 2018, the groundbreaking for The Brigantine’s Portside Pier took place.

Today, the 42,000 square foot Brigantine project is larger than the nearly 25,000 square foot Anthony’s restaurant. And, because preserving marine life was the main priority, the entitlement and permit process took some time, said Morton Jr., which included working closely with the National Marine Fisheries Service and the Army Corps of Engineers.

The Brigantine’s Portside Pier is The Brigantine, Inc.’s 15 property. Out of the other 14, two – Point Loma Brigantine and Poway Brigantine – remain closed due to lack of outdoor space to properly operate. The rest are doing online ordering and take-out as well as pick-up, he said, and others are utilizing their parking lots in order to meet the latest COVID-19 related guidelines.

As a result, The Brigantine is doing about 65% of typical revenue, said Morton Jr.

Today, those involved with the project feel energized by the direction in which The Brigantine’s Portside Pier is going in so far.

“The opening of the Portside Pier not only delivers public access along the iconic Embarcadero but will also help spark San Diego’s economic recovery amid a global pandemic,” said San Diego Mayor Kevin L. Faulconer. “With hundreds of new jobs coming for one of our hardest hit industries, this opening comes as welcome news.”