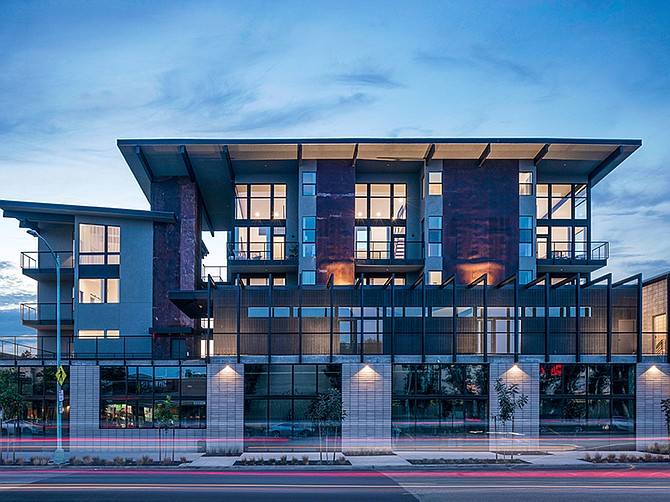 Photos courtesy of Curtis Micklish. An apartment project on 30th Street, between Howard and Polk avenues in North Park, combines old and new.

A North Park apartment complex has drawn kudos for embracing and restoring two 90-year-old Spanish casitas as part of a development that includes a very modern glass, concrete and steel structure.

At an estimated cost of $19 million, The Jackson, 4126 30th St., includes the two older buildings that have been restored with five apartments and the five-story new building with 31 apartments and 5,658 square feet of commercial space on two levels.

Restoring the one-story and two-story casitas while constructing the new building was a challenge, said Curtis Micklish, who developed the property with Matthew Botham. The architect was Stephen Dalton Architects.

“Overall, it was well worth the struggle to keep those because I think it’s what makes these communities good,” Micklish said.

Razing the old buildings and starting from scratch on a cleared site would have been more profitable, but “It just didn’t make sense,” said Thayer Flynn, who also worked on the project.

“There’s something to be said about keeping the old architecture as well as building the new,” Flynn said.

The Jackson has been nominated for an Orchid in the San Diego Architectural Foundation’s annual Orchid & Onions presentations that honors work of particular note and pans those that went astray.

In the nomination, The Jackson was heralded as “a model for balancing the beauty of history and the need for urban growth, igniting this growing community with a seamless connection between its residential and commercial spaces.”

“Walking down the main street, your eyes are drawn to dramatic roof cantilevers that hover 60 feet in the sky, framing in patinated corten steel panels, Japanese Shou Sugi Ban siding, and custom iron work below.”

The same team that built The Jackson collaborated on development of The Duke, an apartment project that won an orchid from the San Diego Architectural Foundation last year.

Both The Duke and The Jackson have musical connections of sorts.

Natural lighting is an important element in The Jackson, and the new building was erected on the site behind the older casitas to avoid blocking the sun.

The older portion of the project “still gets all the sunlight,” Micklish said. “It’s not really dwarfed by this big building.”

The new building is shaped around an interior courtyard and has what Micklish called “carve-outs” that allows sunlight into the courtyard.

“It kind of creates this more welcoming space,” Micklish said. “The main idea behind that courtyard was to kind of create this community feel so that everybody has window space or balcony space that faces the courtyard.”

Most of the apartments in the new building have floor-to-ceiling glass and high ceilings.

Flynn said the group behind The Jackson wanted something that stood out.

“It kind of creates this more welcoming space,” Micklish said. “The main idea behind that courtyard was to kind of create this community feel so that everybody has window space or balcony space that faces the courtyard.

Including a substantial part of commercial space was important, Micklish said, because he wants The Jackson to be a hub of activity for North Park.

“North Park used to be one of the main shopping places for San Diego,” Micklish said, adding that he hopes the commercial side of The Jackson will be part of a rebirth of the area.

“The hope is to get over this COVID phase and get back to these small, little city shopping hubs,” Micklish said.

With that in mind, Micklish said he’s been careful in selecting commercial tenants.

Bothwell, who manages leasing, said both residential and commercial leasing has been strong.

"We haad great traction in lease-up. People love the building and the location," Bothwell said. "We were pleased to secure Juneshine for a large portion of the commercial space. In addition, two other popular restaurant/bars haave signed on."

Bothwell said he expects the remaining commercial space to be leased and operational by the end of the year."