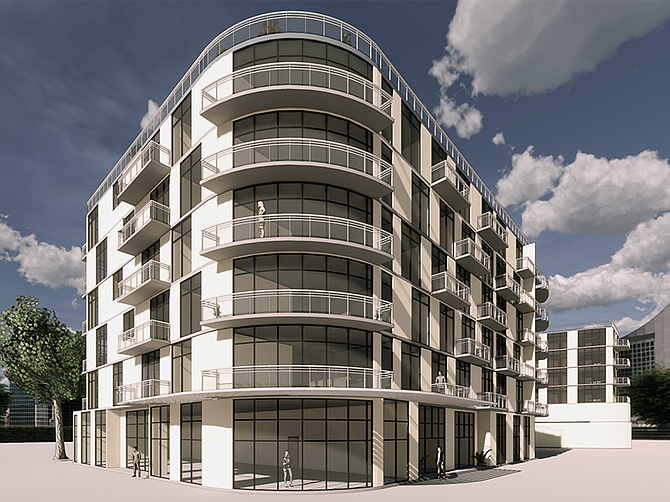 Rendering courtesy of Naturally Affordable Housing. Plans are in the works to build this transit-oriented apartment complex in Normal Heights.

David Iwashita and John O’Connor said their project at the corner of El Cajon Boulevard and 40th Street will be part of a greater drive to bring new life to the area.

Partnered With The Hampstead Companies

They have partnered with The Hampstead Companies of San Diego on the project at El Cajon Boulevard and 40th Street – Bridgedeck - that will include housing for low income families.

The name of the project is a reference to the nearby bridge deck transit center on El Cajon Boulevard above Interstate 15.

“We’re hoping to use this as a platform to go after and buy more properties as partners said Jeff Jallo, principal of The Hampstead Companies.

Based in downtown San Diego, The Hampstead Companies has developed affordable housing projects across the country but this would be their first ground-up development in San Diego, Jallo said.

The location of the Bridgedeck project in Normal Heights is ideal for a family housing project because it is near Hoover High School, Wilson Middle School and 37ECB community school, Jallo said.

Iwashita and O’Connor are co-founders of Naturally Affordable Housing, which is the entity that’s developing the Normal Heights Bridgedeck project.

They created it “to help with our housing needs but do it in a smart way,” said O’Connor, president of the El Cajon Boulevard Business Improvement Association.

O’Connor’s family operated O’Connor’s Church Supply on El Cajon Boulevard until it moved to Mission Gorge Place in 2015 and his mother was a founder of the association.

Normal Heights has “always been a city of villages,” O’Connor said, adding that the Bridgedeck project is in keeping with a city redevelopment plan for the area around it to be “the center of transit oriented development projects.”

“We’ve always wanted that vision to remain for this to be a significant hub,” O’Connor said.

The size of the project is in flux, Iwashita said, because he said he and O’Connor hope to acquire an adjacent parcel to allow for more apartments to be built on the site.

Iwashita, O’Connor and the The Hampstead Companies bought the 20,686-square-foot existing site from the city in July for $2.2 million. The property combined separate lots at 3960 El Cajon Boulevard and 4302 40th St.

Tentative plans call for a project of 180 to 200 apartments in a building that would be eight to 10 stories tall, Iwashita said.

Because the project is deemed transit-oriented by the city, Iwashita and O’Connor weren’t required to provide any parking in Bridgedeck.

The theory is that most residents will use mass transit and those that don’t will have to find on-street parking.

“There’s ample parking on El Cajon Boulevard,”the developers aren’t required to provide any parking for the project, Iwashita said, adding that tenants also will be given monthly credits to use ride sharing services.

The project will include a mix of market rate and subsidized apartments.

Rents for designated affordable apartments will be set according to area median income based on federal Housing and Urban Development guidelines.

Iwashita said that parking is becoming less of an issue, particularly as a result of the COVID-19 pandemic as more people get accustomed to working from home,

“When you start to add up the cost of insurance, gas – all that stuff – it really does start to make sense in this world we’re living in now, if the COVID norm becomes more of a norm and more people are commuting less,” Iwashita said. “This unfortunate event of COVID is actually encouraging and really bolstering the idea that this business model with little to no parking is really going to work in the future.”