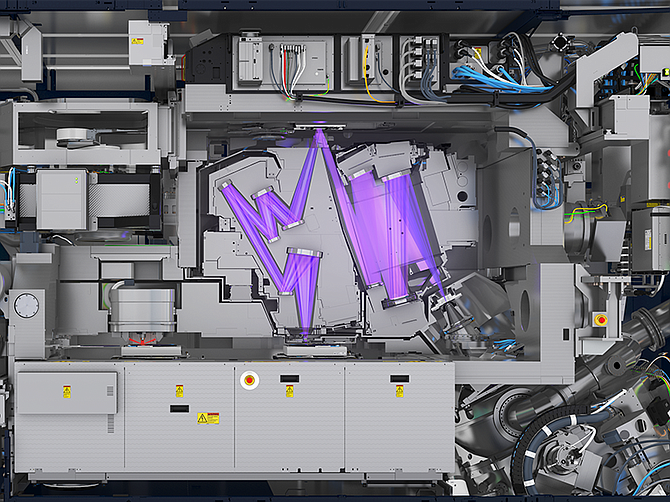 Smaller, smaller and smaller still. The nearly 1,600 employees at ASML in Rancho Bernardo are working to drive down the circuit size on microchips.

It is making improvements to existing technology — one than an executive calls its “workhorse.” Its new model light source, the XLR 960ix, was recently qualified to work on an ASML chip-making machine, called a scanner.

“EUV is really starting to become mainstream,” said Martijn van Noordenburg, vice president of development and engineering of EUV systems, who noted his company is the world’s only supplier for such light sources.

(For an ideal of scale, consider that an individual human red blood cell is 7,800 nanometers across.)

“Our EUV platform will help drive further shrink in the next decade,” said van Noordenburg.

The business case for using EUV is that it is more cost effective for producing chips, van Noordenburg said. Circuits can be made with fewer exposures, therefore with less cost than legacy technology.

Netherlands-based ASML is to the point, even blunt, in describing itself. “What we do increases the value and lowers the cost of a chip,” the company said in its 2019 annual report.

Microchips are made with a photographic process, which requires exposing photosensitive chemicals to intense laser light.

To generate light in the EUV part of the spectrum, ASML uses a very common element: tin. Its machines vaporize very small droplets of tin to create the EUV wavelengths, which are slightly longer than X-rays.

One product advancement is a light source that doesn’t have to be shut down periodically so a factory worker can refill the tin supply. ASML has developed an automatic refill module. An interruption on the production line is less time machines can be making money, ASML executives said,

Continuous refill modules are assembled and built in ASML’s Rancho Bernardo factory. A prototype was shipped in December. Despite COVID-19 restrictions, the factory produces a unit every other day, van Noordenburg said.

ASML, a multinational company, came to San Diego in 2013 when it bought a publicly traded maker of laser light sources, Cymer, for $3.7 billion.

The Dutch company continues to see value in the Cymer brand. It still uses it to for its more established products that generate light in a slightly different wavelength called Deep Ultraviolet or DUV. That is the technology that Patrick O’Keeffe, CEO of Cymer Light Source, calls the workhorse.

The new XLR 960ix light source bears the Cymer name and addresses a problem called speckle, caused by laser light not shining at uniform intensity. “Every laser has speckle,” O’Keeffe said. The phenomenon can pose a problem by limiting the critical dimension in a chip. Cymer is publicizing a solution to this problem called optical pulse stretching.

The new machine is also tough. It has the ability to run an entire year between scheduled maintenance.

Many microchip foundries create their products using both DUV and EUV systems. They might use EUV for a few layers that require extra-small geometries, and a DUV machine for the rest of the chip.

The business model on the Cymer side of the house emphasizes recurring revenue. Roughly 70% of revenue comes from services, with the rest from selling new systems, O’Keeffe said.