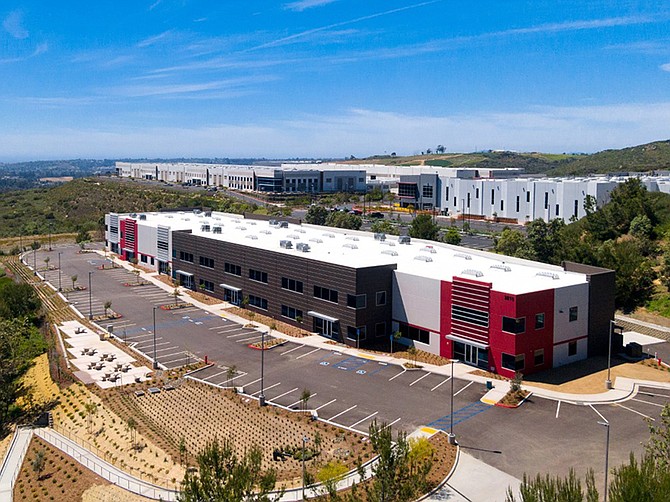 Developer Ben Badiee has completed a Carlsbad flex-industrial building while a Chula Vista warehouse was scooped up by a real estate investment firm in what has become an increasingly tight market.

Badiee said his 50,159 square-foot project in the Carlsbad Oaks North Business Park was 70 percent leased before it was even finished – including about 14,000 square feet of which has been leased to a French company that he said will make the building its U.S. headquarters.

Badiee declined to name the French company that’s moving into his building, but he said the company plans to spend $1 million in tenant improvements.

About 15,000 square feet of space in the building has been leased to Zense, which makes equipment for diabetics.

An additional 6,650 square feet has been leased to The Berg Group, a commercial drywall contractor with national headquarters in Minnesota. The company is moving its San Diego County offices from an existing Carlsbad location to the new building, Badiee said.

The building has been named Innovate for what Badiee said were unusual design features for an industrial building and the tenants he’s attracting.

TFW was the general contractor and Ware Malcomb designed the building’s interior.

“What we’ve done is create this space that’s all open and flowing that can be used for just about any purpose,” said Conor Boyle of Colliers International. “It’s kind of this space that meets all of the millennials’ desire for that creative work environment but it’s really a space that could be for any type of use.”

Boyle, Ted Cuthbert and Tyler Stemley, also of Colliers, are the leasing agents on the project.

In South County, LPC West in a joint venture with Crow Holdings Capital has acquired a 112,000 square-foot industrial distribution building in Chula Vista for an undisclosed price.

About 62,000 square feet of the Chula Vista building is available for lease, according to LPC West.

The deal was brokered by Ron Bement of Newmark Knight Frank and Skye Cook of Cushman & Wakefield.

With San Diego offices downtown, LPC West is the West Coast arm of Lincoln Property Co. based in Dallas. Crow Holdings is a privately owned real estate investment and development firm based in Dallas.

LPC West in July acquired one of the last remaining industrial sites in Oceanside – 30 acres of land in Ocean Ranch, a more than 400-acre industrial development.

San Diego County’s industrial market has remained strong throughout the COVID-19 pandemic, with much of the new development coming in South County and to a lessening extent, in North County which had been a hot spot for new industrial activity.

“North County does not have any more land of any decent size for development,” Badiee said. “There really is not much land left in San Diego for large development generally.”

Like many other developers and investors, Badiee said he’s looking south to Otay Mesa for new projects. He said he has two ongoing projects in Otay Mesa but declined to give details.