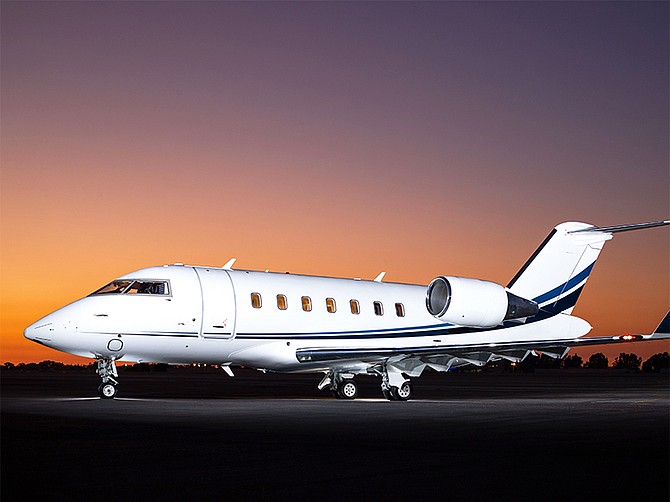 While the commercial aviation industry has suspended or severely reduced its number of flights since mid-March, it appears that local private jet charter companies are seeing an uptick due to COVID-19.

After experiencing a dip of about 80% in April, Kimberly Herrell, president and CEO of Carlsbad-based Schubach Aviation, said numbers are up 20% so far over last year for the month of July. Similarly, Latitude 33 Aviation LLC, also headquartered in Carlsbad, has seen a 14% increase in its charter business the past couple of months compared to the same period in 2019, said Michael Giesbrecht, vice president of business operations. And, Grayson Grove, founder and president of Jet Methods Inc., based out of McClellan-Palomar Airport as well, said his company has seen a steady month-over-month increase as of late.

“Most private charter jet companies were down 90% to 95% in April, so we were one of the lucky ones,” said Herrell. “In early May, we started to see signs of an uptick, and then by mid-May, things started to pick up. It coincided a lot with when hotels opened back up. By June, numbers were right on track with June of last year.”

Herrell said, these days, travel is 80% leisure, 20% business, with personal seeing a big increase since the pandemic. She said there are a lot of first-time travelers going the charter flight route for safety reasons, including less congestion and shared touch points. Herrell said, lately, Schubach is flying mostly to remote places and mountainous destinations like Lake Tahoe, Montana, Colorado and Aspen, and is typically seeing families traveling in cohort.

Giesbrecht from Latitude 33 Aviation attributes the surge in the private charter business to pent-up demand for travel. As a result, the company has seen a lot of first-time flyers who maybe flew first class before but are now justifying the private charter expense for health reasons.

“Overall, prior to COVID-19, we typically see our leisure/business travel ratio maintain an approximate 60/40 balance,” he said. “While leisure travel has generally been heavier, we’re seeing this amplified over the last few months and are now seeing closer to 80/20. Simply put, more people are turning to private aviation for health and safety reasons than ever before.”

Over the past couple of months, not only is Latitude 33 Aviation’s charter business up by 14% compared to the same time in 2019, but the company has also added four more aircraft to its now fleet of 35 to keep up with demand. He said destinations that are most popular at Latitude 33 since COVID are Mexico, the Bay Area and Colorado, adding that there is a strong demand for trips to Hawaii as well.

Grove from Jet Methods, founded in 2003 and with 20 employees, said the private charter company’s numbers have been increasing month-over-month since May. And, much like Schubach and Latitude 33, it has been gaining business from first-time private flyers, also.

“We saw a rebound in flight bookings in May due to pent-up demand and that rebound has continued month-over-month up until the present,” he said. “We are seeing a fair amount of new customers because of the value in traveling with those they know in the cabin as well as with the same pilots. And then, flying direct, nonstop to destinations and the flexibility of traveling on their own schedule.”

Right now, for Jet Methods, flights are 75% leisure, to places like Idaho, Montana, Oregon and Colorado, and 25% business. Typically, Grove said it is about 70% business and 30% leisure. Like the rest, he is seeing a lot of interest in customers wanting to purchase their own jets and is looking to add aircraft to his fleet of six by the end of this year.

On the safety aspect, all of the businesses are conducting pre-screenings on both passengers and pilots, reminding everyone to social distance and wear face masks (although, it is not mandatory for passengers while flying), and cleaning with CDC-approved products and/or through the service of aircraft specific sanitizing companies between flights.

But, will the momentum continue after COVID?

Grove said he wouldn’t be surprised if, in the fourth quarter of this year, business activity picks back up, especially because corporations are still open. “There isn’t a safer and more efficient way to travel than privately,” he said.

Giesbrecht said he is optimistic.

“It is very possible we can continue to see strong demand through the rest of the year,” he said, adding that he’s had many inquiries recently from potential first-time private jet purchasers. “I wouldn’t be surprised if we see things die down just a bit, but nothing like what we saw in April.”

Herrell, who said Schubach is currently looking to expand its fleet of 15, agrees.

“I think it might die down a little, but I think new travelers will continue to seek us out,” she said. “There is just a different level of consciousness now while traveling and people are starting to understand the value in time saving and less stress component of traveling on their own schedule. With the current issues the country is experiencing, these are benefits they know they can get from flying private. It’s just a different comfort level.”