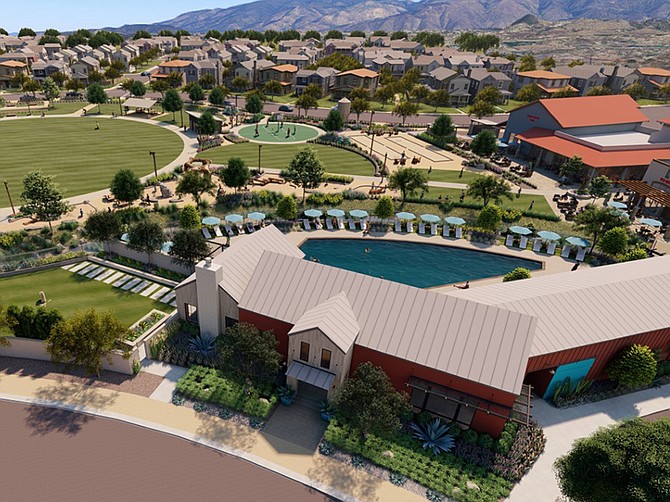 Rendering courtesy of Touchstone Communities. Park Circle in Valley Center is going up on a former dairy farm site.

Construction is about to begin on the first two neighborhoods of a $400 million master planned community in Valley Center—Park Circle.

The developer, Touchstone Communities, picked Shea Homes and Beazer Homes to kick off the residential construction, which will ultimately include 632 homes on the 188-acre site of a former dairy farm.

Site development is already underway and construction was started earlier this year on the community’s main clubhouse, said Kerry Garza, president of Touchstone Communities based in Mira Mesa.

“Our goal is to get builders going on the smallest projects as soon as possible,” Garza said. “Ultimately, there will be eight neighborhoods, probably I’m going to say five to seven different builders.”

Shea Homes will build 88 homes initially and Beezer will build 64 homes, but Garza said both companies could be among the builders chosen for other neighborhoods within Park Circle.

Initial construction will be around and near a circular park from which the development takes its name on the south end of the site along Valley Center Road.

The overall Park Circle project will include two private recreation buildings, several parks, a retail center and an extensive trail system, according to Touchstone Communities’ website.

Construction of the retail center at the southeast corner of the site is tentatively set to start in summer 2021.

The Beezer Homes neighborhood fronts the main road through the development – Park Circle Way near the 2.6-acre Harvest Park and recreation centers.

Garza said the neighborhood is “our Mayberry” in which every house has a front porch with garages in the back.

“What we’re doing there is pretty special,” Garza said. “All you see is the porches, no garages and cars parked in driveways and such.”

Jeana Boulos, a member of the Valley Center Planning Group, said the project is favored by some residents who say more housing is needed and criticized by those who prefer to keep Valley Center more rural.

“Valley Center in general doesn’t really have high density so when you have high density, you’re going to stand out,” Boulos said. “I’m hoping that the final results will be good, will be positive.”

She said Park Circle will provide needed moderately priced housing in parts of the development.

The original plans called for a grand opening of the development earlier this year, but Garza said bad weather combined with the COVID-19 pandemic slowed construction.

“We had heavy rain during the winter and that really threw the project off. Then we got into the whole COVID slowdown, so it really pushed us back,” Garza said.

Among the parts of the project still to come is a 52-unit mix of townhomes and single-family homes that will be designated as affordable for low income and moderate income families.

“For families that are looking to buy a starter home, these are going to be great opportunities,” Garza said.

The market for Park Circle is likely to range from young families to empty nesters.

“A lot of these millennials, they want to raise their kids in the old traditional way. They want to get their kids out to the country, they want to feel safe. They want to ride their bikes around the neighborhood,” Garza said. “One of the things that changed recently due to COVID is there is a very strong interest for people to move out of the city to where they have a little more space. There’s also kids who grew up in Valley Center who want to get back to Valley Center.”

A New Downtown for Valley Center

Garza said the development would serve as a new downtown for Valley Center.

The site is at the northwest corner of Valley Center Road and Mira de Valle and was once Konyn Dairy, which closed in 2008.

The overall design of the community pays homage to the history of the property,

“It’s supposed to look like old California. You’re not going to find any Tuscan stone houses, modern contemporary houses with slick lines,” Garza said. “This is meant to blend in with the character of the area, which is really what most people are looking for nowadays. The whole Tuscan thing is gone. Everybody is out looking for the traditional farm house look.”

Boulos of the Planning Group said she likes the overall look of the development.

“It’s nice that it’s not just another cookie cutter neighborhood,” Boulos said. “They have tried to make it flow, not straight streets, curved streets.”

About a third of the property will be left as open space and Moosa Creek, which runs through the site, will be widened “to make a nice river corridor with two pedestrian bridges crossing it.

Baring any more setbacks, Park Circle should be built-out by mid-2023,Garza said.