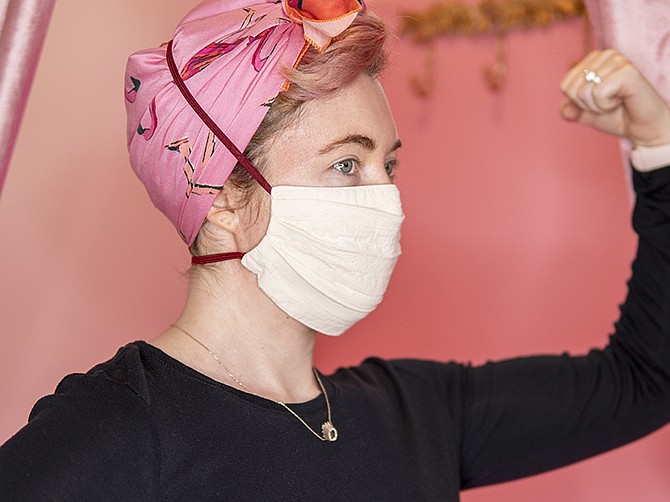 With Fashion Week San Diego’s annual runway event taking place in October, its designers – and even some of its models – have temporarily reallocated their energies to make personal protective equipment for local healthcare workers and members of the community.

More than a dozen of FWSD’s past and present participants answered the call to action made by FWSD founder Allison Andrews to help supply frontline workers, as well as San Diegans in general, with gear like face masks and medical caps to help stop the spread of the novel coronavirus. Now, the downtown-based organization, which has doubled its revenue growth almost every year and has up to 300 employees depending on the season, has halted preparations for the annual affair for the time being to aid in the more pressing matter.

According to many involved in the FWSD initiative, including Andrews, it was their personal connections to essential workers that led them to want to step up for the cause.

“How it originally happened was, some people in our network needed masks, and we saw through social media that designers were making them,” said Andrews, who founded FWSD in 2007. “Some people reached out to us, asking, ‘where can I get masks?’ Then people at Rady Children’s Hospital, which I have a relationship with because of my son, asked about our designers making masks. So, we put out a call to all designers… and that is how we got the response.”

Last year, Andrews’ son spent time at Rady’s NICU due to a medical condition he was born with and has had multiple surgeries at the hospital, she explained about her relationship with the staff there. She said, so far, she’s collected over 1,000 masks that she has donated to Rady’s as well as Scripps Memorial Hospital Encinitas and other local medical facilities.

For Kelly Bañaga, 2018’s FWSD 2nd Top Model winner, it was a chat with her best friend, a nurse at a San Diego hospital, that prompted her to put her sewing chops, which she learned from her mother, to good use.

“When COVID-19 hit, all of our lives changed,” said Bañaga. “Normally, I’d be ramping up my workout, getting ready for the runway. But this year, I’ve hunkered down behind my humble sewing machine. My best friend, Danae Mucher, is a nurse at Scripps Memorial Hospital and after a few weeks of working on the COVID-19 ICU unit, she mentioned to me a need for scrub caps for herself and a couple of friends. The caps help provide them extra covering and protection for their head, hair, ears and neck… These nurses put aside their own fears and go into battle for us each and every day. If there is even a small way we can help, to me it feels like my duty to do so.”

Since April 6, Bañaga has sewn 180 scrub caps using upcycled materials. They have been donated to Scripps Memorial and Sharp Grossmont Hospital, she said. At press time, a shipment of caps is on its way to some San Diego nursing staff that have been sent to New York City, the epicenter of the outbreak, she said.

Bryan Vaughn, creative director behind VaughnBerry, a fashion house founded in 2016 and headquartered in Vista, has made 300 masks in the past two weeks, most of which he has donated to people in the veterinary field, an industry he worked in for almost 17 years. Although he had already begun working on his collection for the annual Fashion Week San Diego event in October, he said his own connection to healthcare pushed him to put his designs in the back burner for now and help essential workers.

“When the COVID-19 pandemic hit, it became clear that the day-to-day functions of society have fundamentally changed,” he said. “Simple tasks like going to the grocery store no longer took minutes, but instead an hour or two… When face masks became a recommendation by the CDC (Center for Disease Control and Prevention), I began to notice the strong demand for face masks. I was a veterinary technician for almost 17 years and operated inventory at multiple hospitals. I understand the need for surgical masks and the importance of leaving the medical grade masks to the professionals that need it. It was then that I decided to help in any way that I could.”