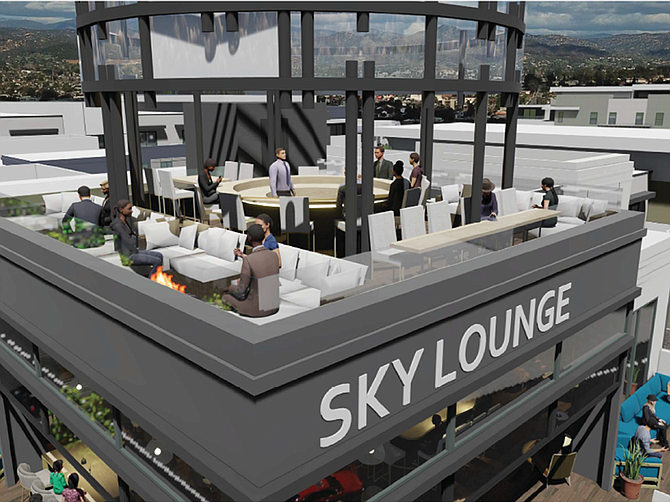 The transformation of the former Palomar Health hospital campus on the edge of downtown Escondido into a residential community could begin in less than a year.

“Our goal would be to start demolition of the buildings late this year or early next year,” said Lance Waite, a partner in Integral Communities.

Estimated to cost $200 million, the Palomar Heights project is meant to be a visual landmark for the city with a 75-foot icon tower that would include a sky-lounge restaurant.

“As you’re driving up Grand Avenue, it’s a focal point,” Waite said. “When you see this icon building at night and that restaurant lit up, it’s going to be something the city of Escondido will be very proud of.”

The project would include 162 for-sale townhomes, 258 rental apartments for families and 90 apartments targeted at people 55 and over but not age restricted, said Ninia Hammond, project manager for Integral Communities.

“With the mix of housing, this will be an exceptional premier community for the city of Escondido,” Hammond said.

Waite said the apartments in the age-targeted portion of the development would be smaller than in the rest of the project with mostly studio and one-bedroom apartments ranging from 550 square feet to 800 square feet.

In the family area, units would range from about 750 square feet to about 1,800 square feet, Waite said.

Apartment rents have yet to be set.

The project also would have 10,000 square feet of retail space.

“We have elements in the project that can sustain almost a lifelong community,” Waite said.

Someone can start out renting a family apartment, move up to a for-sale unit, and later retire to an age targeted unit.

“We’re really trying to create this community within the community of Escondido that has a vibrancy of its own but can reach out to all the improvements that are going on along Grand,” Waite said.

Integral Communities also is reclaiming a foot paved section of the site as a park that will include a memorial honoring military veterans, Waite said.

The buildings would be a combination of steel, glass, brick and wood in what Hammond said is a contemporary style with a nod to the original art deco city hall which was on the site before it was used for a hospital.

A goal of the project is to highlight local vendors.

“We’re already talking to a couple of local restaurants that are potential tenants in operating the restaurant,” Waite said.

As the makeup of the Escondido City Council changed, Waite said Integral Communities adjusted its plans to reflect changes in what council members wanted on the site.

For example, in one version that was planned as of February 2019, the project would have had 450 units in a combination of rental apartments and for-sale condominiums.

As directions from City Council shifted, Waite said more emphasis was put on putting more housing on the site.

“Whenever you do a project that’s located in the key part of a downtown, a lot of people have a lot of opinions on what it should be,” Waite said.

He said Integral Communities has worked with the community and city officials in refining its project.

Opened in 1954, the existing campus includes the six-story original hospital and the nine-story McLeod Tower that was added in 1974.

“We’re looking for opportunities that would capture any history that we can,” Hammond said. “That would be photographs and art.”

Most of the hospital’s functions were moved in 2012 when Palomar Health District opened the $956 million Palomar Medical Center at 2185 Citracado Parkway.

Until work begins on the site, Integral Communities has offered to make the property available to Palomar Hospital for treatment of COVID-19 patients, although Waite said that it doesn’t appear that the space will be needed.

Because the project is still in its early stages, the COVID-19 pandemic hasn’t affected it so far, but there is some concern about financing.

“One of the big things that the current pandemic has really turned completely upside down is the financial markets,” Waite said. ‘It might be a little more difficult to gain the financing we’re looking for.”

Waite said the pandemic has affected projects Integral Communities is already marketing in Northern California, where he said sales are down about 80 percent.