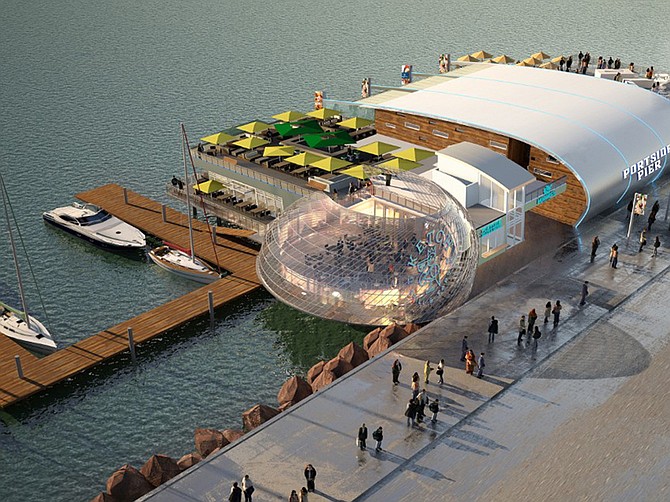 Rendering courtesy of Tucker Sadler. A waterfront view of the Portside Pier, a new dining destination on the Embarcadero.

A $25 million project to bring what could well become a new landmark along downtown San Diego’s bayfront is expected to be finished by July.

The Brigantine Restaurant Group is building a two-story dining complex right on the water with several separate restaurants on the site of what was once Anthony’s Fish Grotto restaurant.

Mike Morton Jr. president and CEO of the Brigantine Restaurant Group, said his family “really wanted to put a star there,” something of “architectural beauty.”

His brother, Matt Morton, the company’s director of restaurant development, said the goal was to create “a unique dining” experience in “some pretty forward-looking architecture.”

Aptly named Portside Pier with its dockside dining, the two-story structure will have several restaurants including the company’s signature Brigantine Seafood & Oyster Bar.

The curved barrel-shaped steel roof with zinc shingle cladding that covers the north end of the structure combined with the Brazilian hardwood siding is meant to represent someone throwing a net from the wooden deck of a boat, Mueller said.

The three steel plates that form the roof were fabricated in Phoenix at Encore Steel then shipped to the Pacific Northwest to be curved.

During a sunny day, the metal roof glistens like the sea.

“You see a lot of glass, a lot of decks and open space trying to allow our great waterfront to be the feature when you’re inside, not so much what’s happening around you,” Mueller said.

A second-floor ballroom that can seat 150 and hold up to 200 people is surrounded by glass.

A centerpiece of the Brigantine restaurant portion of the complex is a giant wall-mounted sculpture of an octopus by Ryoko Nasu of the Hatch Design Group that Slater said weighs about 3,000 pounds.

“It does give an interesting relief on the wall,” Mueller said.

Many seafood restaurants feature paintings of sculptures of fish, but “an octopus is one you don’t normally think of, and they do have a very good octopus recipe,” Mueller said.

At the south end of the complex, there’s a dock where boaters can tie up.

The second floor has a public walkway and viewing deck with tables and chairs for up to 108 people.

“It’s a great spot on the bay, there’s so much to see,” Mueller said.

Anthony’s Fish Grotto had operated a restaurant along the embarcadero for 69 years, but the San Diego Unified Port District in November 2015 chose Brigantine Restaurants to redevelop the property.

The initial plan was to build the new restaurant complex atop the wooden pilings that supported Anthony’s Fish Grotto but the Brigantine Group wanted to add a second story and the wood pilings weren’t strong enough.

“We ended up tearing everything down and starting from scratch.” Slater said. “It’s not too often that you build an entirely new pier.”

That brought its own challenges, working in the water with the rising and falling tides and storm surges, said Randy Stoner, a superintendent with Pacific Building Group.

The concrete used to make the pier and deck also was a special marine mix that hardened faster than normal concrete and had corrosion inhibitors in it.

“The concrete cured so fast, we were struggling to get it in,” Slater said. “The day we poured it, we could walk on the deck.”

To install utility lines, workers had to drill through seven feet of concrete in the existing embarcadero pier at water’s edge.

“It was kind of cool to core through seven feet of concrete,” Stoner said.

Stoner and others had to devise a system of ropes, pulleys, and barges to work beneath the new deck.

“Some days, we couldn’t work because it was too rough,” Stoner said. “You have to really watch the tide table.”

Workers also had to be careful not to disturb marine wildlife.

The old wood pilings were replaced with 48 concrete pilings.

Using a barge-mounted crane, “they’d drive them down to the point of refusal they call it, where they won’t go down anymore,” Stoner said.

Once in place, the tops of each piling was trimmed with a diamond-edged saw to make them the same height.

In driving the pilings and building the concrete deck, workers also had to avoid disturbing marine wildlife as much as possible.

“If there were seals coming, we had to wait until the animals were 200 yards away,” Slater said.

Because Portside Pier construction was well along before the COVID-19 pandemic hit, David McNiff, senior project manager for Pacific Building Group, said the pandemic has had little effect on the project.

There was some concern about getting all the materials delivered on time, but McNuff said “We’re getting all of our shipments and it’s keeping us moving.”

Like many other businesses, Slater said “We’ve had to adjust and put in new protocols with face covering and handwashing stations on-site,” adding that “In terms of workforce and procurement of materials, we were very fortunate.”

Working on the project with Pacific Building Group and Tucker Sadler architects were B&G Consultants, Merkel for water quality monitors, WRA, Inc. for biological monitoring, Moffat & Nichol International, Inc. and R.E. Staite on the pier and piles and PK Associates as structural engineers for the building.

Within eyesight of the cruise ship terminal, the Midway Museum and the Maritime Museum, Portside Pier is in the heart of one of the city’s busiest tourist sites but Mike Morton said that he wants Portside Pier to appeal to San Diegans as well.

“We want to serve the locals. We want people to make it a regular dining spot or on special occasions,” he said.