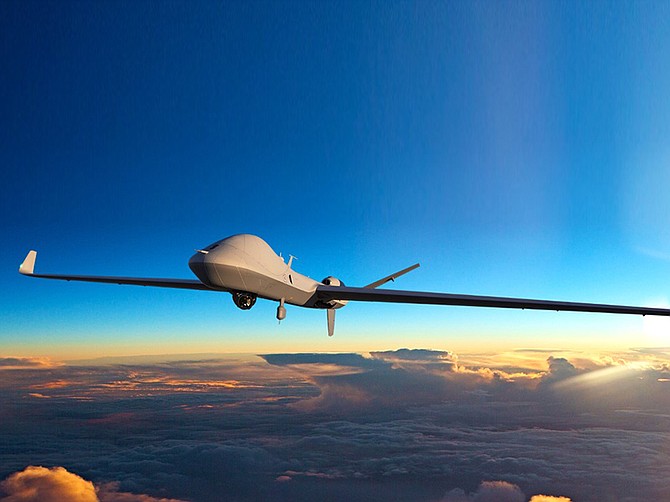 eneral Atomics Aeronautical Systems Inc. continues to search for new customers, and that search has the company looking overseas — most recently, to Greece.

As representatives of several European countries looked on, the Poway-based business flew its unmanned, remotely piloted aircraft from Larissa Air Base in the northern part of the country for 10 days. The demonstrations, held in December, were meant to show off the maritime patrol capabilities of its MQ-9 Guardian aircraft.

During the course of the demonstrations, Greece announced plans to buy three aircraft, a company representative said in an email interview in late March. The two parties are negotiating details.

“There are at least another dozen countries that are interested in our maritime patrol capabilities,” said Tommy Dunehew, vice president of international strategic development at GA-ASI.

The U.S. government and allies use GA-ASI aircraft for airborne intelligence, surveillance and reconnaissance. In certain cases, they use it to deliver missiles. The aircraft do have pilots and systems operators, but those people stay on the ground, connected with the aircraft via secure telecommunications links.

One key selling point of a GA-ASI aircraft is endurance. The system the company is exhibiting can stay in the air for up to 40 hours.

Pins in the Map

GA-ASI is putting more pins in its world map as it gains customers.

In an April 2017 look at GA-ASI’s international business, the Business Journal counted the United Kingdom, France, Spain, Italy and the United Arab Emirates as GA-ASI customers.

The Netherlands signed on in 2018. In December, the company added Australia as a customer.

Belgium is in negotiations with GA-ASI, and Canada might buy. In both Belgium and Canada, GA-ASI is reviewing how companies in the potential customer’s home country can supply parts to their remotely piloted aircraft. The arrangement is common in international aerospace sales.

Japan was a potential customer in 2017 and it’s still in talks with GA-ASI. Dunehew said his company is evaluating Japan’s needs.

The company declined to give statistics on its international and domestic businesses.

“International business is very important to GA-ASI as the market shows there is a need for our products and services throughout the world,” said Dunehew. “For our new SkyGuardian remotely piloted aircraft, the U.K. is our launch customer and we see a lot of the follow-on sales being to international customers.”

SkyGuardian is built with systems allowing operators to fly the aircraft in civilian airspace. GA-ASI has built the first MQ-9B SkyGuardian aircraft — a company plane that will be used for testing — and is at work on its first aircraft for its U.K. customer, which will be delivered in the early 2020s.

GA’s Aeronautical Systems business, an affiliate of La Jolla-based General Atomics, may be looking overseas because it perceives the end is in sight for U.S. sales of new aircraft.

The proposed fiscal 2021 defense budget shows the U.S. Air Force has plans to wrap up its buy of GA-ASI Reaper aircraft — which are similar to the aircraft being built for the U.K. and exhibited in Greece. If Congress approves the budget as written, the Air Force would buy its last 24 aircraft this fiscal year, cutting its total buy to 337, said Ron Stearns, an independent aerospace analyst based in the San Francisco Bay area.

“I think this is a pretty big inflection point for GA,” Stearns said.

It is worth noting that the proposed Pentagon budget is a starting point. Congress must now debate the budget, and the final version may look very different.

A small opportunity with the U.S. government may be ahead.

The Pentagon is reportedly in the market for up to 75 aircraft for the U.S. Special Operations Command. The aircraft would support commandoes on the ground in “austere and permissive environments” — that is, parts of the world where the adversary has no antiaircraft weapons. Militarized versions of small, manned aircraft are under consideration, but Jane’s Defence Weekly reported in February that a top Air Force officer would like to give the job to GA-ASI aircraft. The program is called “armed overwatch.”

Though contracts to build U.S. military aircraft will come to an end someday, GA-ASI will still have roughly 20 years of contracts ahead of it sustaining the aircraft in the U.S. inventory, Stearns said.

GA-ASI is very good at servicing what it sells, he added. Stearns mentioned that Saudi Arabia has bought similar unmanned aircraft from China, but service and support have been inadequate.

GA-ASI and competitors are also looking into civil uses for their aircraft. In early April, the Poway company worked with NASA to demonstrate use of its SkyGuardian aircraft as a civil engineering tool. It flew over Southern California, inspecting rail lines, power lines, canals and other infrastructure. Specialized electronics on the aircraft let it detect and avoid other air traffic.

Cross-town competitor Northrop Grumman Corp. is also building an optionally manned aircraft for civilian missions. It can fly with a pilot, or be converted to remote control operation.

Teal Group, in a November market study, estimated that unmanned aerial vehicle (UAV) makers will increase production from current worldwide UAV production of $7.3 billion annually in 2019 to $10.2 billion in 2029, totaling $98.9 billion in the next 10 years. Military UAV research spending would add another $61 billion over the decade, Teal Group analysts said.

An Eye in the Sky

The fuselage of the demonstration aircraft that went to Greece had a stylized eye on either side, with four words from an ancient Greek playwright that translate to “The one who sees everything.”

Greece seems to need an eye in the sky. Border issues and geopolitical intrigue are two concerns. Refugees from the Middle East can easily cross into Greek territory with a relatively short boat ride. The Greek island of Lesbos is a destination for migrants headed into Europe and home to an overcrowded migrant camp — and is only a few miles from the coast of Turkey.

There is also a concern about activities of the Russian navy in waters near Europe, according to FlightGlobal.

Getting U.S. government clearance to sell its aircraft even to NATO allies and countries friendly to the United States has been a feat for GA-ASI, said Stearns, the analyst. The process took years.

“It hasn’t been an easy deal for them,” he said.

The GA-ASI aircraft are all descendants of its Predator aircraft from 1994. In November, General Atomics Aeronautical Systems announced that its Predator family of aircraft surpassed 6 million flight hours. The business has produced more than 900 aircraft and more than 400 ground stations.