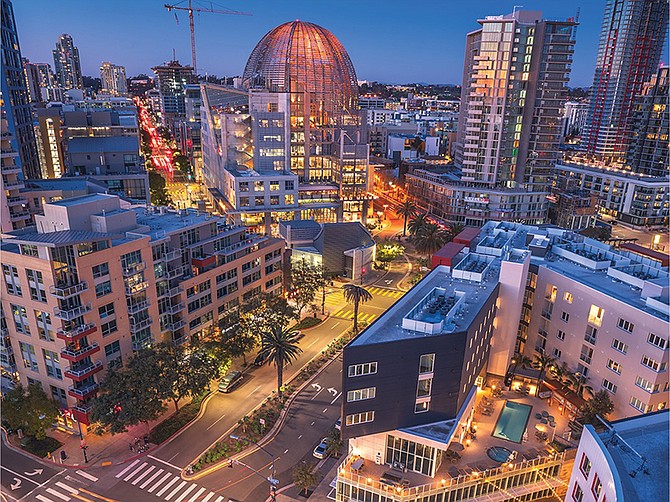 Photo courtesy of Park 12. Urban views are one amentitiy of Downtown high-rise living.

Downtown San Diego’s market for multifamily housing was strong going into 2020 and is expected to bounce back equally strong coming out of COVID-19, according to several real estate experts.

“Downtown as a whole is still the most desirable rental market in the whole county,” said Rachel Parsons, a director of the commercial real estate brokerage Moran & Company.

“The economy in the second quarter is going to be a little rough all around. Things might be a little soft in the short term,” said Parsons, who specializes in multifamily transactions. “In the long term, why wouldn’t you want to be downtown?”

With construction listed among essential services, projects that were under construction going into the pandemic are being finished and planning is proceeding on those that were longer term.

“No matter where people are working, people need a place to live,” Brennan said.

She said some projects due to come on line late this year are still preleasing apartments.

In the short term, some projects that haven’t actually started construction may be on pause for the moment, according to some experts.

Initially, leasing activity downtown and elsewhere had all but come to a standstill, although some said interest has started pick up after disappearing at the onset of the pandemic.

“Most projects underway are likely to be finished as builders will be anxious to receive cash for projects already funded,” said Lynn Reaser, chief economist at the Fermanian Business & Economic Institute at Point Loma Nazarene University.

“There may be cases, however, where the funding is stalled although the Federal Reserve is now desperately attempting to keep credit flowing to all corners of the economy,” Reaser said, adding that owners of recently finished apartment projects may have a challenge filling them.

“Job, income, and stock market losses combined with massive uncertainty will all weigh on demand in the short-run,” Reaser said.

That, in turn, could cause a temporary slowdown.

“Plans for new developments downtown are likely to be scrubbed until the inventory of unsold inventory is substantially absorbed and the timing of a reopening of the economy becomes more clear,” Reaser said.

Economist Alan Nevin, director of economic and market research for Xpera Group, said one effect of the pandemic that helps landlords is that people are more likely to stay put, given them some stability in rental income.

Nevin said that’s especially true downtown, where many renters are professionals who are not as likely to be affected by any economic downturns caused by the pandemic.

“The good news is their residents, by and large, have stable jobs so I don’t see them having a wholesale bailout of tenants,” Nevin said.

Gary London, a senior principal of London Moeder Advisors specializing in real estate, said he expects a recession caused by the pandemic “to be a major adjustment” to the economy but “downtown will continue to evolve and be a strong market.”

“There’s nothing that will change for the worse downtown,” London said.

The multifamily market downtown will bounce back from any slowdown, London said, but he said the big question is how long the downturn will last and whether the recovery will be quick or gradual.

“Basically, at the beginning of the year, most people were thinking full speed ahead, that 2020 was going to be like 2019. The consequences have been so significant in terms of loss of jobs, closures and so forth, now we have a real recession in front of us,” London said. “Sometimes there are soft landings. Sometimes there are hard landings. In January, most people were predicting when the economy lands, it will be a soft landing. As it turns out, this is a very hard landing.”

Chuck Hoffman, a principal with ACI Apartments, said he expects vacancy rates to rise downtown, but he said that’s due to new projects opening more than anything else. The company specializes in the acquisition and sale of multifamily real estate.

“I would have to guess by the fourth quarter, we could be rebounding in sales,” Hoffman said. “The problem is we’re in this very uncertain territory and without a real clue with how this is going to turn out economically.”

Reaser of the Fermanian Institute was among those who said the pandemic could cause downtown to lose some of its luster as a top place to live.

“If ‘social distancing’ were to become a more permanent feature of the economic landscape, that could shift more demand from the denser downtown lifestyle to the suburbs,” Reaser said. “However, it is premature to say that such a long-term shift in living will indeed take place.”

Parsons of Moran & Company doubts that the pandemic will affect the long-term attraction of downtown.

When the economy recovers, “people are going to be desperate to go out to eat and have a cocktail and what better place to do that than in downtown,” Parsons said.

London of London Moeder said that as a practical matter, San Diego will have to keep building dense projects downtown and in other urban neighborhoods to even come close to meeting its housing needs.

“I’m working on massive projects that all involve density, lots and lots of density in or near downtown,” London said.

Declining to give details, London said the projects are in their early stages, while adding that “None of those projects are being put on hold.”

With a plethora of so-called luxury apartment towers coming online downtown, the commercial real estate brokerage CBRE reported that downtown monthly rents were among the highest in San Diego County at the close of 2019 at $2,217 for a one-bedroom apartment and $2,859 for a two-bedroom apartment.

Those rents could drop a bit during and immediately after the pandemic, although some said that building owners are offering concessions to new tenants – such as free rent for a month or more instead of lowering rental rates.

“In the near term, some anticipate one to two quarters of rent concessions, which seems reasonable,” said Victor Krebbs, a senior vice president of the brokerage Colliers International.

Countywide, CBRE reported that “sales activity in San Diego picked up substantially in Q4, due to the quick uptick in sales $50 million or greater.”

“The total sales volume reached $964 million, a 27.6 percent increase quarter over quarter and a 32.3 percent increase year-over-year,” CBRE reported. “Total sales for the year 2019 exceeded $3 billion for the first time since 2016.”