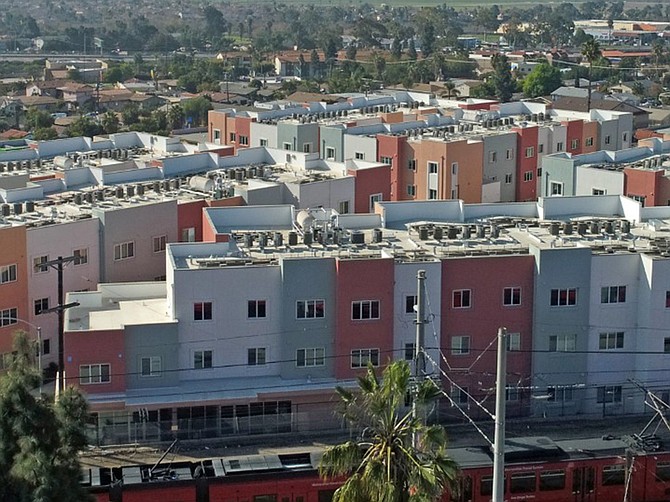 A $43.2 million affordable housing project was recently completed in San Ysidro by Chelsea Investment Corp., which has several other projects in the works including three in San Diego.

So far, the COVID-19 pandemic hasn’t seriously affected the projects, said Jim Schmid, founder and CEO of the Carlsbad-based company.

“It’s important to keep those construction jobs going. Of course, the office is 100 percent remote,” Schmid said, adding that on the construction job sites, “people are maintaining their distancing.”

The pandemic “slows things down and makes them a bit more expensive,” Schmid said, but the company has been able to keep the projects mostly on schedule.

“We have a deadline to finish and you can’t blame COVID-19 for not finishing the construction,” Schmid said. “We haven’t had to put anything on hold, but when it comes to making new deals or closing, it takes longer.”

Other Projects in the Works

The San Diego projects include the$145 million, 14-story St. Teresa of Calcutta Villa apartment tower in downtown San Diego’s East Village and the $24.5 million renovation of a Palm City motel.

Those projects are for Father Joe’s Villages. The converted motel is being renamed Benson Place in honor of Roger and Judy Benson, who donated $3 million toward the project.

In all, Schmid said Chelsea Investment has about 700 apartments under construction and expects to close on projects by the end of 2020 that have about an additional 500 apartments.

“We’re really pleased with all that. We hope lenders will stay the course,” Schmid said.

Speaking at the opening of Paseo La Paz, Commission Vice Chairman Ryan Clumpner said that because of the project’s proximity to a trolley station, “this is going to open a lot of opportunities for many residents to have close access to transportation. This means opportunities for employment, for education, for better quality of life as they can access a wider array of the larger region.”

The one-bedroom, two-bedroom and three-bedroom apartments in Paseo La Paz are designated for households with annual incomes of up to 60 percent of the area median income - $64,200 for a household of four.

Amenities include a 2,000 square-foot community room, a lounge and kitchen, a computer lab, and an outdoor recreation area with a children’s playground.

Casa Familiar will provide a variety of services at Paseo La Paz, including adult education, classes on financial literacy, English as a second language instruction, after-school tutoring and arts, fitness and recreation programs.

Schmid said building Paseo La Paz was especially challenging because it involved dealing with several land owners and the San Ysidro community plan that governs zoning in the market was being revised.

“A lot of the issues in San Ysidro is a lot of the land is held in very small parcels so to develop it, you have to do an assemblage. They were patient sellers but you had to get a bunch of them together,” Schmid said, adding that it took about a year to put all the pieces together.

“We really, really love this project,” Schmid said. “It’s a great example of an impactful large project really designed in collaboration with the community to really take advantage of its transit oriented site and provide a lot of housing.”