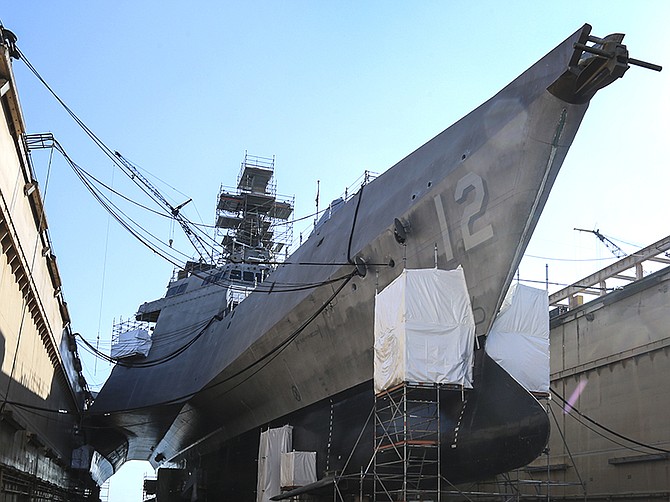 The following are selected defense contracts awarded to San Diego County companies in April. They have been announced by the U.S. Department of Defense or the contractor itself.

Littoral Combat Ships are small ships, 422 feet in length, designed to go into shallow coastal waters. Their purpose is to defeat what the Navy calls “anti-access” threats including mines, quiet diesel submarines and fast surface craft.

Each of the six indefinite delivery, indefinite quantity contracts has a five-year ordering period. Delivery orders will be competitively awarded under the contracts. Fifteen companies bid on the work. The Naval Sea Systems Command of Washington, D.C. awarded the contract extensions, announced on April 14.

Separately, the Navy awarded $116.6 million worth of contract modifications to seven ship repair firms that are small businesses: Colonna’s Shipyard West LLC, East Coast Repair and Fabrication, Epsilon Systems Solutions Inc., Marine Group Boat Works, Pacific Ship Repair and Fabrication, Propulsion Controls Engineering and South Coast Welding and Manufacturing. Under the deals, the contractors will do maintenance work on destroyers, cruisers and amphibious ships. Work will be performed in San Diego and is expected to be complete by May 2021. The Southwest Regional Maintenance Center of San Diego awarded the contracts.

Kratos Defense & Security Solutions said on April 15 that its aerospace business recently received sole-source contracts valued at more than $19 million. Under the deals, Kratos will deliver 21 high-performance jet target drones in models BQM-167 and MQM-178. The business will also provide spares and support. In addition, it will provide development engineering to give certain drones a new capability.

Kratos did not name its customers.

“To prepare for a forecasted growth in demand, Kratos Unmanned has invested in and expanded our production facilities over the past 12-18 months, allowing us to begin immediately fulfilling new orders even in these uncertain times,” said Steve Fendley, president of the company’s Unmanned Systems Division. Kratos opened a new factory in Oklahoma City with a subsidy from the state government. The new factory complements its existing factory in the Sacramento area.

“We are proud to continue supporting our defense customers as critical infrastructure within the defense industrial base. Upholding the nation’s security by helping our customers meet their critical needs while also protecting the safety and health of our employees is our top priority and will continue to be as we meet the increasing demand for our high-performance UAS.” The initials stand for unmanned aerial systems.

The target drones are used in war games, serving as a stand-in for threats. They allow troops to practice using weapon systems, radar and other systems.

A fact sheet on the Air Force website puts the BQM-167’s price tag at $570,000, though it was unclear whether that is the current price.