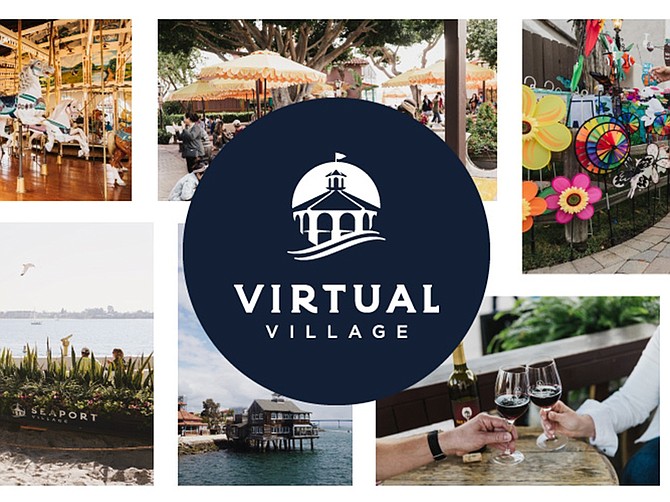 Back in March, in the midst of just opening or about to open a handful of new food and beverage places and shortly after launching the first of a number of planned virtual programs, COVID-19 forced Seaport Village to temporarily reduce operation hours to zero.

Synchronously, the coronavirus crisis also fast-tracked the digital transformation of downtown’s waterfront neighborhood and bred innovation within its more than 60 tenants, most of which quickly shifted their business models to online format in response to the pandemic.

With the help of the Port of San Diego, SLP Urban Planning and partners like The New Children’s Museum, Birch Aquarium at Scripps Institution of Oceanography, and The Casbah, along with its collection of shops, galleries and eateries, Seaport Village has pivoted all of its efforts to remote offerings, collectively known as “Virtual Village” and accessible through the Seaport Village site. As a result, engagement has increased dramatically on the site, according to data provided by Seaport Village, with an average of 2,950 people reaching each stream so far in April and the average post clicks being 435.25.

“In an effort to continue to support small businesses, many of which have been a part of Seaport Village for many years, it was important for us to do as much as we could to continue to elevate them and provide access to their businesses in these times,” said Stacey Pennington, president and founder of SLP Urban Planning, which works to create the activations and partnerships with artists and residencies for Seaport Village. “This was a quick and nimble pivot… and we are excited to be able to do so quickly with the support of the Port of San Diego and the very close collaboration with Protea Property Management Inc. … Our goal was to create a virtual village, effectively, so folks can continue to explore our offerings online.”

The “Virtual Village” programming is broken down into three verticals: Seaport Streams, Seaport Sessions and Seaport Studio, said Scott Andrews, marketing director at Seaport Village. The videos can be watched via Facebook, Instagram and Vimeo, he said, and are promoted through the Seaport Village website and its newsletter.

Seaport Sessions is a monthly pop-up art and live music festival that occurs every third Thursday of the month from 6 to 8 p.m., said Andrews. The Thursday evening program features music curated by Vinyl Junkies, an independent record store, and The Casbah, a nightclub and live music venue. The weekly set includes Seaport Village’s lineup of regular musicians, Andrews said.

Seaport Streams features weekly concerts, performances, workshops, demonstrations, story time and more, he said, including book readings with some of its entertainers and arts and crafts sessions led by educators from The New Children’s Museum. Andrews said Seaport Village partners with the businesses as sponsors, although there is no cost involved, just participation. In return, Seaport Village shares information about the particular business and its current offerings as it live streams the book reading or the concert, or whatever the entertainment may be, he said.

Seaport Studio is where the Seaport Village “Seaport Sessions Podcast” lives, said Pennington, and it is broken down into two sections: Seaport Sessions, a weekly, multiformat podcast about the past, present and future of San Diego’s waterfront, and Seaport Stories, a monthly feature that takes a look inside the various small businesses in and around Seaport Village.

“The most recent podcast series, ‘Ripple Effect’, is pretty cool,” said Pennington. “Not all San Diegans know of the important role blue-tech clusters have within our community… In this podcast we showcase and share individual stories and ways they are making an impact on our local economy as well as the environment.”

To get a better sense of how to support its tenants and partners during the pandemic, Seaport Village sent out a survey to further understand their needs, said Andrews. He said, through that exchange, Seaport Village was able to help the businesses with virtual content, website creation and tutorials on how to set up social media pages.

The most affected industry by COVID-19 at Seaport Village has been food and beverages, said Andrews, and they have had the hardest time transitioning to the web at this time. Still, those who have are also listed on the “Virtual Village” page, he said.

Mike McWilliams and Linda McWilliams, owners of San Pasqual Winery, which opened a location in Seaport Village in 2014, said they rely on the Seaport Village “Virtual Village” promotion and reach to get the word out on its online store. This has helped the urban winery with three tasting rooms make a weekly revenue of about $4,000 to $5,000 during the crisis, they said.

Because of the pandemic, it is believed Seaport Village won’t reach its projected FY20 revenue of $11.7 million, up from $6.7 million in FY19. And, some of the planned hospitality openings will remain on hold till further notice, said Andrews. But, what’s important now, said Pennington, is to continue to provide its fans access to its offerings albeit the shutdown.

“We want to provide regular access to fans of Seaport Village as well as introduce new audiences to the unique qualities of the actual space within this city virtually,” she said. “We’ve been really excited about the level of engagement and community feedback of those offerings.”