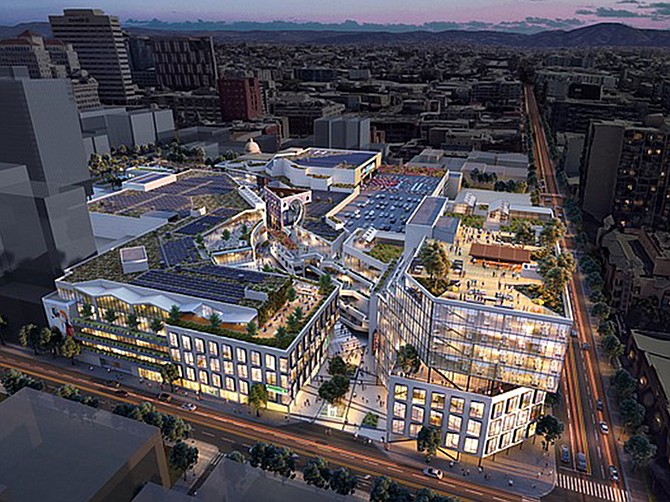 Redevelopment of Horton Plaza from shopping mall to office campus will soon move on to a key phase with demolition of the exterior façade.

“We have all the financing required to effectuate this redevelopment,” said Dan Michaels, a managing director of Stockdale Capital Partners, the project developer.

“We’re now working on fencing the property and moving on to all the exterior demolition as things calm down with the COVID-19 crisis,” Michaels said.

Michaels didn’t have a firm date for when construction will start, but he said he doesn’t expect the project to be slowed by the COVID-19 pandemic.

“So far, we don’t see any impact to the project as schedule moving forward,” Michaels said. “We’re dedicated to pushing it forward and getting the project online.”

The project is tentatively set for completion in early 2022.

Michaels said the walkways and connecting bridges “will all be reimagined and modernized.”

“We’re going to be reimaging the architecture design of it and all of the exterior elements,” Michaels said. “We’re adding some floors about Nordstrom, so there will be come vertical components to that.”

The redevelopment project passed a key milestone in March when it secured a $330 million loan with a group of funds managed by Alliance Bernstein.

The timing was fortunate because it came before the COVID-19 pandemic became apparent in the U.S.

“In this environment, a lot of projects are going to be put on hold if they don’t (already) have the financing,” Michaels said.

Stockdale in January reached a settlement of a lawsuit filed by Macy’s, clearing the way for the store to close.

Earlier this month, 24-hour Fitness notified members that it was permanently closing its Horton Plaza location after temporarily shuttering it in response to the pandemic.

Michaels said Stockdale hasn’t decided what to do with the 24,000 square foot of space 24-hour fitness occupied but that the new Campus at Horton would include a fitness center.

“We don’t have any specific plans, they just shut it down,” Michaels said.

Stockdale acquired the mall in 2018 from Westfield for $175 million.

The retail portion of the project will be focused on food, beverage and health and wellness.

“It’s not the traditional clothing retailer, per se,” Michaels said.

Design work on the 10-acre project is being led by Retail Design Collaborative and Rios, Clementi Hale.

The Horton Plaza redevelopment is seen by many as a key element in the push to attract new businesses downtown, especially high tech companies.

Although the pandemic has caused a near halt to leasing activity downtown, Michaels said Stockdale has gotten feelers from several large companies, including some in La Jolla and UTC where little space is left to expand.

“If you’re a company up there and you need to grow, there aren’t many options,” Michaels said.

Post-pandemic, Stockdale is confident that it will have little difficulty leasing the Campus at Horton.

“My sense is there’s still going to be a need for space,” Michaels said.