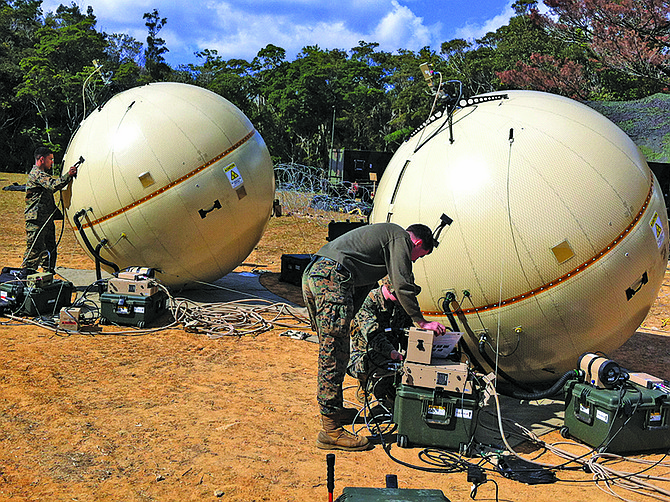 It started with a “what if” question.

San Diego-based Cubic Corp. has a business in Alabama building military satellite dishes. But not the ordinary kind. These are large, portable units made of strong fabric which inflate with the help of an air pump. Once inflated, the pump regulates the air pressure so the antenna holds its parabolic shape.

With the national need for ventilators, employees asked, what if Cubic could leverage its pump technology to help sick people breathe?

“We’re now on Day 17” of a project to develop a ventilator, said Roark McDonald, vice president and general manager of Cubic’s portable satellite dish business, in an interview on April 7.

The project was envisioned as a local effort to relieve local ventilator shortages should they arise. It got full backing from the corporate office in San Diego.

“I just encouraged him to go as fast as he can,” said Cubic CEO Brad Feldmann.

As it develops the product, the company is working with the U.S. Food and Drug Administration to get permission for emergency use.

Once the basic design work is done, there will be a discussion of how Cubic might price such a unit, how many it can produce, and what sort of investment it can make in a supply chain, Feldmann said.

“I think we can find customers. It’s the right thing to do,” he said. “I think we’re definitely going to do this.”

Cubic has roughly 200 employees at its business in Alabama, called GATR.

Once a standalone company, GATR developed the antenna, which inflates into a ball. Some models are taller than a person. The parabolic dish is nested inside the fully inflated unit. One selling point is that a user can deflate the antenna, pack it and ship it in as few as two cases. Competing products made of metal are much more cumbersome and are not nearly as portable. They have to ride in trailers.

Cubic bought GATR in 2015 as part of a wider effort to diversify and add disruptive technology to its defense contracting business.

GATR is located in Huntsville, which gives it a technological edge. Huntsville is a town of rocket scientists; it’s the home of the U.S. Army’s Redstone Arsenal and the NASA Marshall Space Flight Center. It is a destination for engineers from all over the world, and it boasts the greatest number of Ph.D.s per capita in the world, McDonald said.

The ventilator project based on the GATR components is well on its way.

“We stepped into the project with 80% of the job done,” McDonald said, adding that the team was spending its time integrating sensors and control.

The business also forged a partnership with the University of Alabama in Huntsville, which has a nursing school, to test the ventilator. In addition to medical expertise, the nursing school brings reference ventilators to the development effort as well as a human simulator called iStan.

The product will also be tested in a veterinary setting.

On April 7, McDonald reported the team was “pretty close” to human testing.

The FDA will be interested in aspects such as design, testing, quality and the production process, said McDonald, who has been with Cubic for four years and previously worked for Northrop Grumman Corp.

“Our teams innovate to make a positive difference in people’s lives,” said Feldmann, the CEO, quoting the company’s statement of purpose. The GATR effort is about team and about innovation, he said.

“They’re working very hard and are very proud of what they’re doing, and obviously, so am I.”

Cubic is not the only enterprise with San Diego ties working on ventilators.

Cubic offers technology and services for militaries as well as government transportation agencies. It operates in 19 countries and had $1.5 billion in revenue last year.

The balance of the business is making do, given the circumstances of the COVID-19 pandemic. Feldman said he is holding Zoom meetings with Cubic’s 6,200 employees.

One of the businesses’ other factories is a maquiladora in Baja California, employing tens of people. Feldmann said it is gearing up to produce fabric face masks. If needed, it could work three shifts and produce 6,000 units per day, the CEO said.

In addition, Cubic runs a division offering live, virtual and constructive training for members of the military. Products include videogame-like teaching tools. Cubic is working on a videogame that trains a player in the proper use of a ventilator. “We’re reaching out to ventilator companies,” the CEO said.

In the current financial climate, Cubic was also recently able to refinance some debt at better rates.

Meanwhile, GATR employees continue production on military contracts and other R&D, as its engineers fine-tune their ventilator.

“It’s the first product I’ve ever built I hope no one ever needs,” said McDonald.