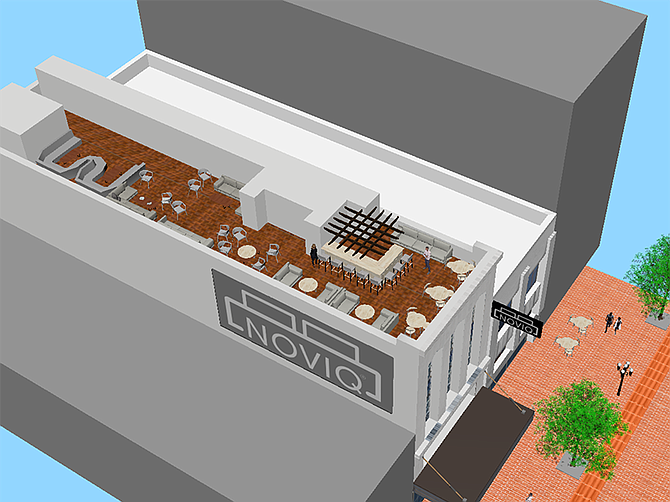 Built in 1911 according to city historical records, the Dalton Building, also known as the Universal Boot Shop building at 937-939 5th Ave., was acquired by Evan Rundle in March for nearly $1.9 million.

“As soon as I saw this beautiful building, I knew it was perfect for what we want to do,” said Rundle, founder and CEO of NOVIQ. “This building has been empty from 2009. That’s tragic. That never should have happened.”

Rundle also has made an offer to buy the neighboring Howard Building to combine it with the Dalton Building to make a single boutique hotel.

His plan is to build a 40-room hotel with a roof deck, taking special care to pay homage to the history of the structures and their neighborhood.

“My ultimate goal is to preserve the heritage and talk about the area,” said Rundle, a Miami native.

Before he came across the Dalton Building, “I had no idea of the heritage of that building itself or that area,” Rundle said.

Bill Shrader, a senior vice president with Colliers International’s Urban Property Team in San Diego, said the building at 937-939 5th Ave. has had only two owners and was last listed for sale in 1928.

“This was an incredible opportunity for new ownership to acquire and revitalize a storied piece of San Diego’s Gaslamp District,” Shrader said.

Shrader brokered the sale on behalf of the previous owner, UBS Properties.

Rundle was represented by Dion Noravian of Green World Realty.

The three-story building was built for $25,000 by the Schaniel Brothers Company as a hotel with retail shops and a basement.

It operated as the Manhattan Hotel from 1913 to 1928 in what was then downtown San Diego’s notorious Stingaree District and was “a house of ill repute during its entire existence” as a hotel, according to a city historical report.

Legend had it that people who wandered into the Stingaree district could be fleeced by grifters faster than they could be stung by the stingrays in San Diego Bay.

The basement of the Dalton Building served as a speakeasy during Prohibition.

In 1921, the building also became home to the Universal Boot Shop.

It was remodeled in 1930 with a fire escape removed and the front of the building remodeled in Art Noveau style.

The building is at the edge of a new promenade planned for the Gaslamp Quarter.

“We’re going to turn it (the hotel) into kind of a walking tour where someone can come in off the promenade and read about the area, the heritage,” Rundle said.

Although design details are still be worked out, Rundle said he plans to include a number of historical exhibits so visitors and guests could tour the property and get a feel for what it once was.

Because it’s so early in the design and planning stages, Rundle said he hasn’t determined what the nightly room rates will be, but he said they would be slightly less than other luxury hotels in the market.

The architect on the project is Office Untitled based in Culver City.

The structural engineer is Dodd & Associates based in Kearny Mesa.

He’s on the lookout to acquire more property in San Diego and elsewhere and said the renovation he’s planning on his property in the Gaslamp will be the model.

“This will be the first of many I want to do all over the country,” Rundle said.