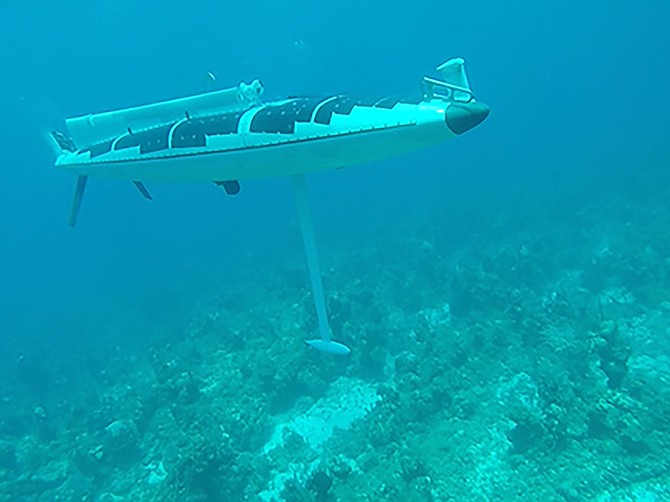 The business recently secured a multimillion-dollar order from the U.S. Department of Homeland Security for multiple copies of its autonomous vehicles, which can travel both on the surface of the water and under it. Financial details of the deal and the number of vehicles ordered were not disclosed, though a news release described it as “a fleet.”

“It pulls us into production, which is good,” said Ocean Aero CEO Eric Patten.

The Ocean Aero craft is about 14 feet long, the size of a small recreational sailboat. It carries a hard sail that propels it when it rides on the surface of the water. It can also fold the sail close to its hull, and then dive, to escape foul weather, lessen the chance of a collision or avoid detection. The vehicle can travel underwater using a battery-powered thruster.

An array of solar panels attached to the top of the hull can recharge the vehicle’s batteries.

The swimming robot carries a variety of sensors, which can send data back to the government agency that owns the craft.

Like unmanned aircraft, endurance is a key selling point of the swimming robot. Ocean Aero claims that its craft can operate on the surface of the water for longer than three months. The most heavily equipped model can spend greater than eight days under the water.

The government agency that ordered multiple copies of the craft is Homeland Security’s Science and Technology Directorate, which will research how it might use such a vehicle.

Ocean Aero did not say how such agencies planned to test the vehicle, nor did it give a specific concept of operations. “We may not be privy to everything they’re thinking,” said Patten. Possible uses include meteorology and oceanography. The sensors the craft carries will determine use. The submersible boat can carry 50 pounds of whatever electronic gear the client wants to put aboard it.

The U.S. Navy has long been using swimming drones, which are built by a variety of companies.

Ocean Aero has also been working on a larger version of its vehicle, which would be able to carry more instruments.

Investors in Ocean Aero include Teledyne Marine, Lockheed Martin Corp. (NYSE: LMT) and Energy Innovation Capital. The vehicle maker has alliances with the Scripps Institution of Oceanography and a business group, The Maritime Alliance.

Until recently, Ocean Aero shared quarters with Teledyne Marine in a North San Diego industrial park. It graduated from 10,000 square feet in that building to a 32,000 square foot production facility in Sorrento Valley.

Ocean Aero is starting to raise its Series C funding round, Patten said. He added that the business has 22 employees but plans to add more to its staff later in the year.

The company has three patents, covering its thruster, its two-part foldable wing sail (made out of composite material) and its folding keel.

Other government agencies besides Homeland Security are working with the craft, Patten said. He would not say which agencies. At least one customer has been a fairly demanding one — which has been good from an engineering point of view. The customer’s suggestions have made the watercraft more rugged, reliable and capable.

Externally, the latest vehicles look like the prototype Ocean Aero first built. Internally, however, the latest vehicles are very different. Patten calls the latest versions Generation Three. Today’s products come in three different models, the Scout, the Discovery and the top-of-the-line Navigator (the latter has the most battery storage). The models with less equipment aboard have a limited capability to dive, while the ones with more can dive to 650 feet.

The craft is built for endurance, not speed. Top speed for the Ocean Aero craft is 5 knots — roughly 6 miles per hour.

The unmanned waterborne vehicle space is actually reaching $1 billion in sales, Patten said, adding that could be an inflection point. When the flying drone space reached $1 billion, it was around the terrorist attacks of Sept. 11, 2001. After that the industry experienced remarkable growth, he said.

Patten and his backers might be on to something.

At least one other San Diego business, called SubSeaSail, is building a semi-submersible vehicle that travels with the help of a sail. SubSeaSail touts its craft as economical.

Michael Jones is an investor in Ocean Aero and managing partner of SubSeaSail. He describes Ocean Aero’s craft as “a racehorse” and the SubSeaSail craft as “a workhorse.” The market is big enough for both, he said.

The market for unmanned vessels is likely to be in the hundreds of billions of dollars, he said. On top of that, humanity needs new tools to understand the ocean and reverse ecological damage.

Investments in such companies are the right thing to do, Jones said, and they promise good returns.