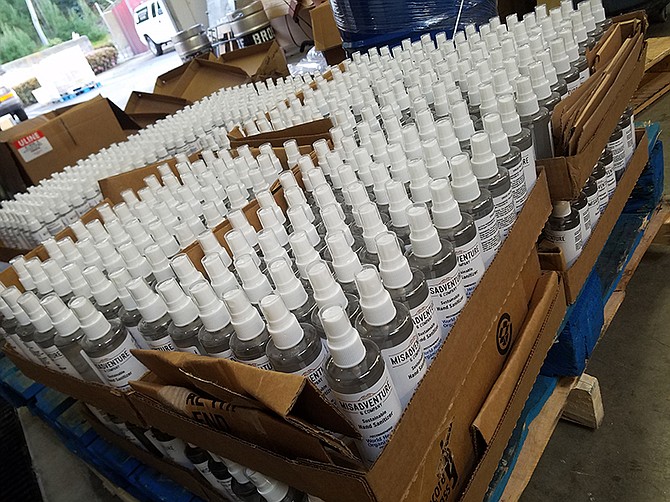 Rais Case is a company that makes multi-functional bags. Pacific Coast Spirits is a craft distiller.

But for the last two weeks or so, these two local businesses, among others, have shifted their efforts to fulfill the needs of frontline workers and the community during the COVID-19 pandemic.

“For the month of March, we had originally forecasted our sales would be $25,000. Instead, we will just get to $9,000,” said Julie Rais Ellis, who founded the Oceanside-headquartered company in 2010 and has four employees. “So, we transitioned into making masks to create some energy… We’ve been doing masks and it is good to keep us productive and get something out there that people need. We are also creating revenue that way.”

While most of Rais Case goods are made of leather, wool and eco-friendly materials, Ellis said the face masks are made of an eco-cotton twill. She said she is donating to local hospitals, nurses, doctors and also the homeless in an effort to help stop the spread of the novel coronavirus. Ellis said consumers can find them for sale on her website, www.RaisCase.com, where they retail for $18/piece. For every face mask purchased, Rais Case is donating one new mask to an essential worker.

In an effort to get her followers involved, Ellis has also uploaded a free face mask pattern to her site that can be download and used along with a video tutorial for additional guidance. Additionally, she’s gotten pre-washed and pre-cut face masks fabric from the public that she and two employees are hand sewing themselves from home. Ellis said at press time, Rais Case was in talks with a company that is interested in placing an order of 200 face masks, and she is ready to fulfill.

Just four months after opening its doors in November, Pacific Coast Spirits, along with all other food and beverage places in California, was mandated to close due to the rapidly growing coronavirus outbreak. That’s when owner and head distiller Nicholas Hammond shifted gears from producing 20 gallons of spirits a day to now producing roughly 1,500 gallons of hand sanitizer for those who need it the most.

“We got into full production mode and, at this point, can’t produce enough,” said Hammond. “We are delivering to hospitals, municipalities, power companies, water companies – all essential businesses that have to be in contact with people that may or may not be sick. Being able to supply them – it feels good to do that.”

Although he had to lay-off most of his 25 employees, Hammond said he kept a several on board, including chefs and servers, who are all pitching in the hand sanitizer operation. He said what’s being produced at his facility is 80% alcohol by volume and is being packaged in 750 ML glass bottles that would otherwise be used to house spirits. Hammond also said he is only one of many distilleries in town that is producing hand sanitizer right now. Others include Seven Caves Spirits, Liberty Call Distilling Co. and Misadventure & Co.

Others Join the Cause

Whit Rigali and Sam Chereskin, co-founders of Misadventure, said they are producing 30,000 100 ML plastic bottles of hand sanitizer a week. Rigali said the company, founded in 2015 and based in Vista, partnered with a local vape business and is using bottles that would typically be used for vape refills to package the hand sanitizer. And, because demand has been so high, Rigali said he and Chereskin had to hire additional workers to help fulfill orders.

“We have our original four, but because demand has skyrocketed, we are very proud to not only have kept them on payroll, but also hire some out-of-work hospitality workers,” he said, adding that their 62% to 80% alcohol by volume sanitizer sell for $2/ounce. “We have six new employees who are helping us bottle, label, cap and send out some of the product.”

Misadventure is selling direct to consumer and also doing bulk orders to different cities around the country. Rigali said the company is also donating to a couple of non-profits, including ProduceGood and O’Side Kitchen Collaborative as well as the San Diego Bartenders Guild.

For Pacific Coast Spirits’ Hammond, it isn’t surprising to see San Diegans come together and pull through in this time of need.

“We step up,” he said. “This is our community and this is what we do.”