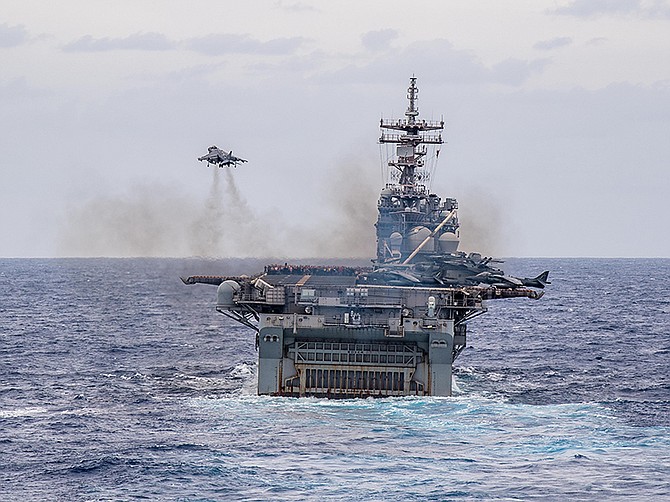 Photo courtesy of U.S. Navy. A Harrier jet takes off the flight deck of the amphibious assault ship USS Boxer in the Pacific in November.

BAE Systems San Diego Ship Repair received a $200.3 million contract for shipyard work on the USS Boxer — specifically maintenance, modernization and repair. The visit will include time in a dry dock.

The Boxer is a Wasp-class amphibious assault ship. The ship has the capacity to carry 1,687 Marines in addition to the ship’s officers and crew — plus aircraft.

The Boxer can carry the Marine Corps version of the F-35 Lightning fighter, as well as older Harrier jet aircraft and a variety of helicopters.

Work under the contract is expected to be complete by December 2021. The contract also contains options; the value of the shipyard deal would rise to $207.5 million if the Navy exercised all of its options.

Right now the Pride of California has two destroyers in it, the USS Stethem and the USS Decatur. A third destroyer, the USS Spruance, rests in the older of BAE Systems’ dry docks, the Pride of San Diego.

Tied up to the shipyard piers at present are the amphibious transport dock ship USS Anchorage and the cruiser USS Mobile Bay. An unusual, temporary tenant of the shipyard is the Arco, the dry dock that the Navy uses at its submarine base on Point Loma.

Local shipyard work has been on the rise since the U.S. Navy started transferring more of its assets to Pacific ports.