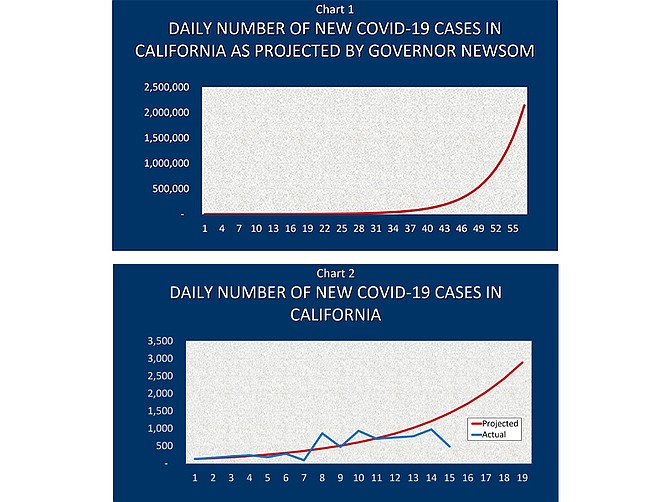 I was reminded of that story when I read the following in Governor Newsom’s March 18 letter to President Trump:

In the last 24 hours(March 17), we had 126 new COVID-19 cases, a 21 percent increase. In some parts of the state, our case rate is doubling every four days. We project that roughly 56 percent of our population – 25 million people – will be infected with the virus over an eight-week period.”

Like the grains of wheat doubling on each square, Governor Newsom believes the COVID-19 infection rate will increase exponentially to the point where there’s more than a 50-50 chance that a California resident will be infected. That’s an alarming statistic, to say the least. I’m here to tell you, though, it isn’t going to happen.

Being a numbers kind of guy, I decided to check the Governor’s math. Using his assumption of a doubling in the number of new cases every four days starting with 126 new cases on March 18, the daily number of new cases will hit 2.1 million by May 13, eight weeks or 56 days later. (See Chart 1)

These numbers point to a cumulative number of 13.4 million infections by May 13, which translates to an infection rate of 30%, not the 55% projected in the Governor’s letter. But even 30% is still pretty scary. I’m convinced, though, that we will not hit a 55% infection rate or ever a 30% rate, both of which are based on exponential increases that will not come to pass.

It’s only been 14 days since the March 18 letter, and already the actual number of new infections is falling short of the Governor’s projections. As we go to press, the number of new COVID-19 cases has hovered in a band of 500 to 1,000 over the last seven days. (See Chart 2)

It’s too early to conclude, though, that this stable trend will continue. In fact, the reported number of infections is likely to increase sharply as more COVID-19 test kits become widely available. They will not, however, continue increasing exponentially to the 2.1 million new cases by May 13, as shown in Chart 1.

All epidemics eventually end, and they do so because of a myriad of factors. But it’s the coming of warmer weather that may be the major factor explained COVID-19’s passing.

In a March 9, 2020 article, “High Temperature and High Humidity Reduce the Transmission of COVID-19,” that appeared in the Social Science Research Network (SSRN), empirical evidence is presented that strongly suggests that “the arrival of summer and rainy season in the northern hemisphere can effectively reduce the transmission of COVID-19.”

This study, which analyzed COVID-19 cases on a global basis and controlled for other variables like GDP per capita and population density, found that temperature was the most significant variable in reducing the transmission of the disease.

But whether its warmer weather or other factors, I believe it’s safe to dismiss the Governor’s projection that COVID-19 will increase exponentially for six more weeks.

All this, however, is moot since the Governor is not likely to be blamed for issuing projections that bear no basis to reality. Quite the contrary, when the final rate of COVID-19 infections come in sharply lower than his 56% projection, he and other public servants will likely take credit for the difference. In fact, the more that projections of COVID-19 infections are grossly inflated, the greater the credit that can be claimed for the aggressive actions that have decimated our economy.

Governor Newsom is not alone. That fact shouldn’t be surprising. The predilection of most public servants is to err on the side of aggressive economic meddling rather than more rationally balancing the relevant benefits and costs of public policy.

The virtual shutdown of the national economy has even gotten President Trump what he wanted from the Fed - his beloved federal funds’ rate of zero. He was also able to push through a $2 trillion pork-infused COVID-19 Stimulus Bill and now wants another $2 trillion of paper dollars to spread around.

Surely, COVID-19’s spread has been constrained somewhat by shutting down the economy. But is it worth the lost livelihoods and lost businesses that never will reopen? Several weeks ago, a long-time friend cried in my office as he asked me how he can support his family without a job. Multiply my friend by the millions to get a better idea of how the economic shutdown has affected people’s lives.

That shutdown that comes with such an enormous cost will not even be the principal factor that explains COVID-19’s eventual passing. Don’t believe the public officials who tell you otherwise. It’s the coming of warmer days that will likely spell its doom, not the coming of the bureaucrats.

Editor's Note: James Doti, Ph.D., is president emeritus and professor of economics at Chapman University. Chapman's biannual economic forecast is among the nation's most accurate predictors of Gross Domestic Product (GDP). In mid-March, Doti and colleague Raymond Sfeir, Ph.D., director of the A. Gary Anderson Center for Economic Research at Chapman, told the Business Journal they expected a moderate recession as a result of COVID-19.