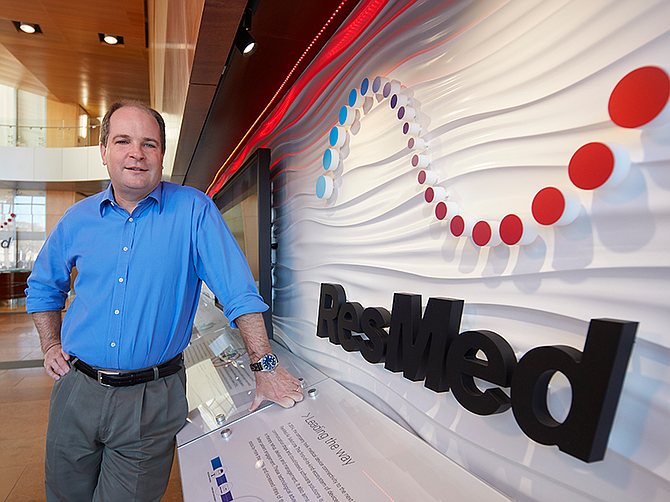 You could hear it in his voice during a one-on-one interview with ResMed CEO Mick Farrell, he is proud of his company and especially proud of his employees.

The San Diego-based med-tech company, which makes masks, devices and accessories to treat sleep apnea and other respiratory conditions under his leadership since 2013, has taken up the challenge of providing ventilators and masks to the coronavirus fight. The company has increased production of ventilators to 2X or 3X; mask production has increased tenfold.

“It’s been incredible watching 7,500 Resmedians all step up in the last three months in this global crisis,” Farrell said. “We’ve ramped up production in our China plants. We’ve ramped up production in Singapore and Sydney. Now we see the next big wave coming to California, New York and Washington state. We are moving some of our sleep apnea lines to ventilators. It’s a huge process for the supply chain team and manufacturing team.”

Farrell said the pinch point is not the end manufacturing, it is really about component supplies.

“We had to work with hundreds and hundreds of companies to ensure those parts are available to scale up production,” Farrell said.

“There is no shortage of companies willing to help,” Farrell said. “There are offers to help ResMed from auto companies, aerospace companies and industrial manufacturing companies, hundreds of offers. Some want to help by making a ventilator; that is not the problem. At one point we needed help with lithium ion batteries. We didn’t need an electric car company to make ventilators for us. But we can say, can you make a battery to this specification? If they can, we solved that component problem.”

Farrell said what is amazing is companies that normally compete say OK let’s all ramp up our manufacturing together.

“Another example is a simple component like an O ring that we needed for ventilators, Farrell said. “We asked a large industrial manufacturing company and asked if they could make a ring to this specification. Absolutely, they said. So there is a solution on every part.”

Farrell did say the company will get back to normal operations, “When we get to the other side of the COVID-19 waves going on … and we will … we will get back to normal. I do think the manufacturing scaling will be good muscle memory for possible future crises that might happen. We will be better next time. That is what is great about a learning company.”

How does the company get its workers to take on such herculean tasks. It starts at the beginning.

“I don’t look for the medical degree, the law degree or the technology degree,” Farrell said. “We look for someone who wants to create a culture of innovation, a culture of ingenuity, so if they run into a problem they think how to work their way around the problem.”

Farrell gave an example of Malaysia closing its border. Rather than giving up on working in Singapore, the company relocated employees to temporary quarters and work continued. ResMed also split shifts so as to avoid transmitting any virus. The company also had quarantine areas ready but it did not have to use them.

That kind of spirit might be why Farrell calls ResMed a “30-year-old startup,” despite the company having a multibillion market cap (nearly $20 billion) and a multibillion revenue ($2.6 billion in 2019.

Under Mick Farrell ResMed made key acquisitions boosting its software and data capacities. ResMed has a billion hours of sleep data. The company has consistently added to its software and data which has been a big help in the crisis, Farrell said, “In three months we have already done white papers. Using our capabilities in data analytics and algorithms we can predict future actions of COVID-19. We are doing incredible modeling using data with John Hopkins University.”

Farrell says he is proud to be part of San Diego’s innovation climate. He names Dexcom, Hologic, Illumina and Qualcomm as some of the local leaders and, of course, ResMed. All these companies do tremendous work, but what’s really amazing is to see it all work together. Data companies, med-tech and communication tech are a “powerful combo.”

As for acquiring more data, all ResMed’s sleep devices have connectivity. Farrell says it is a digital world. Right now, the company has nearly 500 San Diego workers working from home. That connectivity also allows monitoring of COVID-19 patients by caregivers who can’t enter a patient’s room.

Revving Up the Economy

Farrell has his mind on other companies, too. “I am part of a group called the Young Presidents Organization (a global leadership group), Farrell said. “I have lots of friends with small businesses, restaurants, retail, finance … many of these businesses are the toughest hit. It is good to see aid for these businesses, but we should do more. We will need to rev this economy back up. People are ready to go. This will be a fast recovery. What we can do now is order from these restaurants, order online from your favorite retail store.”

Farrell was adamant in thanking the heroes at his company and the heroes on the front lines.

“These machines don’t run themselves,” Farrell said. “I want to thank all the medical workers. The technicians, doctors, nurses and respiratory therapists who are working so hard, these are the absolute heroes, giving the gift of breath to those whose immune systems struggle to fight the virus.”

Farrell gave the public some kudos, crediting them for taking the threat seriously and being so good about following guidelines. Farrell also praised the authorities.

“The authorities – president, governors, and mayors, all stepped up. They didn’t always move as fast as they could have but they are now. We could have taken the laissez-faire attitude like Italy, hoping western medicine would just win out. (Italy has changed its strategy.) We went more with the strict South Korea response because once the virus gets out of control you don’t get to get it back.”