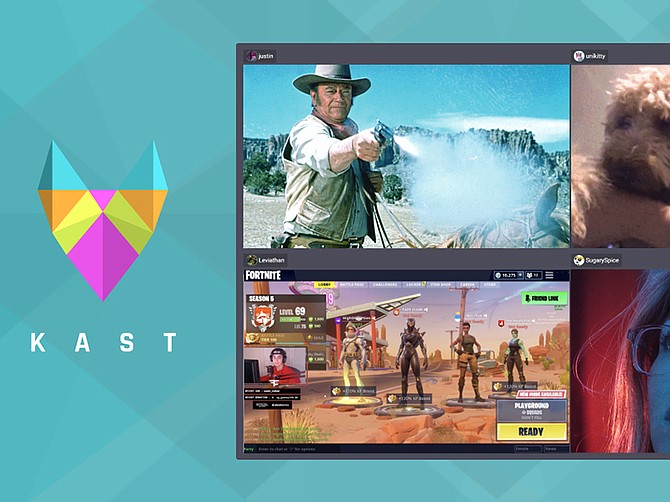 Photo courtesy of Kast. Kast brings Video-On-Demand to the consumer.

The ongoing coronavirus pandemic has halted all non-essential activities as more states across the country opt for ‘shelter-in-place’ policies, temporarily closing dine-in restaurants, entertainment events and movie theaters. Distancing mandates have derailed moviegoers’ chances to munch on popcorn, gulp down soda and catch the latest flicks at the cinema for the foreseeable future. However, Hollywood has been adapting to these closures by fast-tracking new releases for Video-On-Demand, and — in an unprecedented move — began to make new films available on-demand the same day as its intended theatrical debut. That decision has long-been feared by theater chains, but not so much real-time video-sharing platforms.

Kast, the Miramar-based real-time content-sharing application company, is bringing new VOD releases directly to the consumer. After users download the app, the host can share their screen and stream content with up to 20 people and 100 spectators — be it Netflix, Hulu, YouTube, Twitch, or any other streaming app, online or offline — and watch together with ease. A chat feature allows party members to message each other over text without disturbing the stream, or users can link webcams and microphones and talk to each other face to face.

The 13-person company was founded in 2015 and rolled out its beta in 2019 after acquiring intellectual property, software stack and patents from the now-defunct Rabbit. Kast has raised over $4 million in seed round funding, all the while opening a small office in Finland.

Chief Executive Officer Mark Ollila says his company has seen a deluge of daily growth during the past few weeks due to the conditions brought forth by COVID-19.

“I did some forecasts last night and had to throw them away. The numbers were just insane,” he said. “We are in a situation right now where we are growing so fast that we need support from companies like Amazon Web Services (AWS).” Rob Carroll, the director of business development, echoes those sentiments. “Kast has been the master of social-distancing before social-distancing became a common phrase. We feel incredibly fortunate that we can facilitate this for so many people who need the platform now more than ever,” he said. “I think the impact of sharing new experiences together, like watching a new film with a partner, family, or friendship group, is an extremely powerful thing. Not only are you all seeing something new for the first time, but you are all seeing it at the same time and I think that has a huge impact on how people will want to consume media in the future.”

Last week, Disney announced its box-office boon from Thanksgiving, ’Frozen II,’ would arrive to Disney+ three months early to placate quarantined families stuck inside. Amazon launched a first-of-its-kind category on its streaming service, titled ‘Amazon Prime Video Cinema,’ alongside Disney and Pixar’s ‘Onward’ VOD debut after a truncated theatrical run. NBCUniversal will be the first major company to implement a same-day in-theater release in conjunction with a VOD release, known as a day-and-date release — outside of small indie releases in past years — supplanting the traditional months-long wait from theatrical release to VOD with its newest Dreamworks animated film ‘Trolls: World Tour,’ streaming April 10 in the U.S. for $19.99.

Despite some new releases arriving on VOD due to theater closures, many upcoming blockbuster films have been postponed outright. Disney’s live-action ‘Mulan,’ previously set for a March 27 opening, is now postponed to an undecided later date. Disney’s newest subsidiary, 20th Century Studios (formally the historied 20th Century Fox studios), will reschedule its tumultuous Marvel X-Men spin-off ‘The New Mutants,’ and Universal’s latest James Bond romp ‘No Time To Die’ was also pushed back to November. Virtually all production has stalled on projects in the works.

While it’s unclear how lasting this distribution model will be, it’s unlikely to shift the film industry on a dime once quarantines are lifted. However, as more people adapt to a lifestyle increasingly centered in the home, these drastic measures in the era of social-distancing could set a precedent that alters the expectations of movie lovers going forward — especially for San Diegan’s who are refraining from nearly all contact outside the home.

“Maybe we’ll start seeing more of this ‘fast-tracking’ even when things get back to normal. It’s not only during this time of isolation where we can offer this shared experience, and this testing time will open up new doors for the entertainment industry and spark further innovation,” Carroll said.