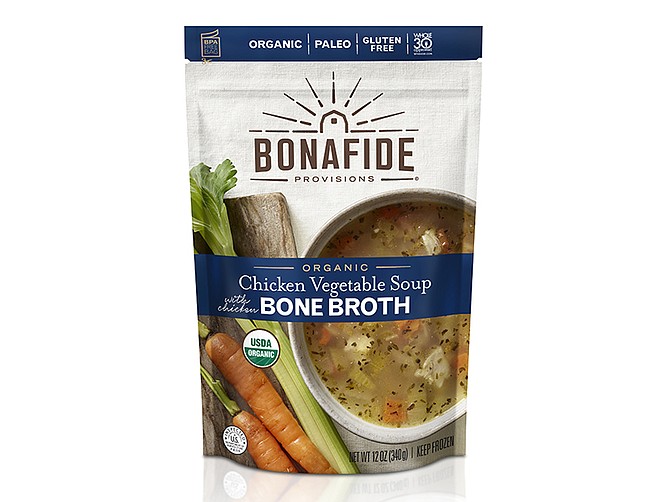 After the government declared a national emergency on March 13 due to the coronavirus outbreak and with frozen foods flying off store shelves as a result of shelter-at-home orders, the sales of San Diego-based Bonafide Provisions’ bone broth and bone broth-based soup products have jumped 500%, according to founder Sharon Brown.

Now, the privately held, multimillion-dollar company, which was in the midst of launching a new product, has temporarily put its line expansion on hold and made filling orders and meeting the demands of its current offerings its top priority.

Moving Through the Product

“What we are seeing through social media is that people that are purchasing the product are not necessarily storing it for later,” said Brown, who launched the company in 2011 and has 15 local employees. “Initially, we thought people were stocking up for the unknown. But, through social media, we are starting to see that because most people are quarantined or self-isolated, that is causing them to cook more at home… (and) so many people are eating at home right now that they are moving through the product.”

Brown, who founded the company with her husband Reb Brown, said Bonafide Provisions is the No. 1 selling bone broth out of the frozen section in the natural channel. She also said that because people are more concerned with staying healthy and ramping up their immune systems due to COVID-19, they are turning to bone broth as part of their wellness protocol. Some of its health benefit claims include protecting joints and the gut, supporting healthy immune system functions and maintaining healthy skin.

“Any type of crisis will cause us to be introspective about our choices, especially when dealing with a pandemic that has to do with our health,” she said. “It causes us to pause and think about our health and how our immune system is going to react with what it is confronted with. I’m hoping, not from a brand owner, but from a nutritionist perspective, that people will be more mindful about the things they are putting in their bodies and how it all supports these amazing machines to do better and be better and function at their peaks.”

In 2010, Brown earned a degree in nutrition, received several certifications in nutrition, became a nutritional therapist and also a GAPS (gut and psychology syndrome) practitioner.

Brown said that because Bonafide Provisions, headquartered in Encinitas, self-manufactures and has a hybrid manufacturing solution – meaning all equipment is dedicated for its products – it has the ability to scale up production rather quickly. The bone broth and bone broth-based products company sells chicken, beef, turkey and frontier flavored broths and six different soups that are also frozen, organic and bone broth based, said Brown. Bonafide Provisions also recently launched its line of Keto Cups, she said, which are convenient, heat-and-sip bone broths with quality fats in them like coconut oil, MCT oil and butter, she said.