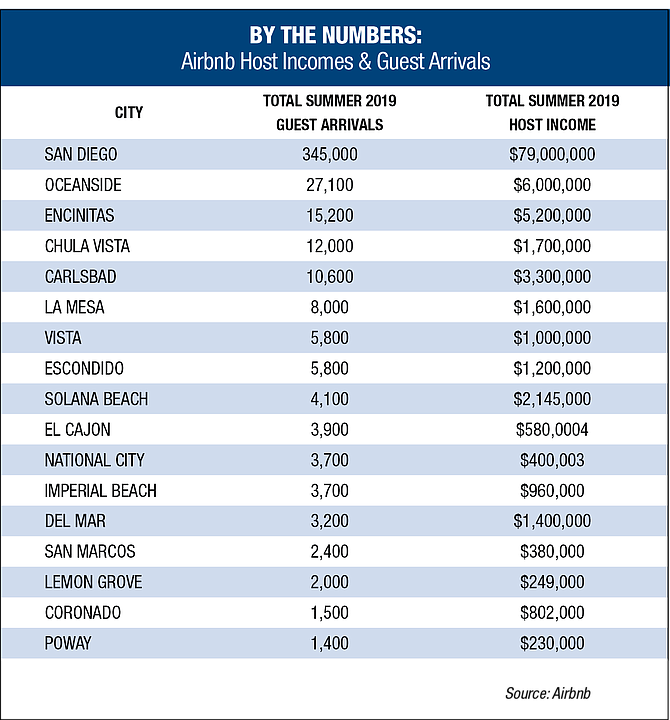 San Diego County continues to be a popular Airbnb destination for travelers.

According to a company news release, San Diego County was the second most visited location in California this summer, with Airbnb hosts in the county earning a combined $112 million in supplemental income and welcoming approximately 482,400 guests from Memorial Day weekend through Labor Day. The host community in the city of San Diego earned $75 million and welcomed an estimated 345,000 guests this summer, according to Airbnb.

“San Diego continues to be one of the most popular destinations for travelers to California,” said Laura Spanjian, Airbnb senior policy director. “Throughout the summer of 2019, we have continued to see the significant, positive impact of our short-term rental community across the county. With more guest arrivals this summer than ever before, hosts and small businesses have been able to enjoy the opportunities created by an expanded tourism economy.”

The top five neighborhoods for Airbnb guests in San Diego this summer were: Pacific Beach, Mission Beach, East Village, North Park and Ocean Beach. According to AirDNA, a data company with a focus on short-term rentals, as of July 2019, there were 11,855 short-term rental properties in San Diego. The top five origin cities for San Diego Airbnb guests were: Los Angeles, San Diego, Phoenix, Ariz., San Francisco and New York City.

In addition to creating supplemental income for San Diego hosts, Airbnb also helps generate indirect revenue for the local economy. According to the company, 92% of Airbnb hosts say they recommend restaurants and cafes to guests; 56% say they recommend cultural activities such as museums, festivals and historical sites to guests; and, on average, 41% of Airbnb guests say their spending occurs in the neighborhoods where they stay.

The Airbnb hosts’ earnings for the summer may signify 2019 might surpass 2018 in terms of combined annual income.

Last year, San Diego County was also the second-most active city in California after Los Angeles. According to a Jan. 2019 news release, the collective income for San Diego-based hosts was $213 million in 2018, coming in second after L.A.’s $613 million. Overall, the California host community earned a combined $2 billion in income while welcoming approximately 9.5 million guests in 2018. According to the news release, there were over 89,000 hosts in the state in 2008 who earned about $12,000 annually in supplemental income. In third place was San Francisco, with 392,000 guest arrivals in 2018 and $143 million in host income for the year.

This is good news for the local short-term rentals industry, which has been under fire the last couple of months. In mid-July 2018, after pressure from residents in certain high-volume short-term rental communities and the California hotel lodging industry, the San Diego City Council voted to outlaw vacation rentals in secondary homes, limiting short-term stays to the host’s primary residence for up to six months a year. The regulation called for all short-term rentals of entire homes to be subject to a licensing fee of $949 annually, which is believed to be the highest in the country; short-term rental hosts to pay a housing fee of $3.96 per night for whole home rentals and $2.73 per night for single room rentals; and services like Airbnb to be required to pay stiff penalties if the online vacation rental marketplace companies fail to ensure their hosts are registered. Despite protests by those in support of the home-sharing industry and demands from both Airbnb and Homeaway for a new hearing in early August, the council reaffirmed its decision.

In response, proponents of short-term rentals, including the Share San Diego coalition, gathered and submitted enough verified signatures for a referendum, and the Council voted to rescind the ordinance.

But late last year, the City of San Diego finally addressed the issue of short-term rentals only to have that progress upended by opponents. Now, the city has the legal right to adopt a new set of regulations within a year, but, those rules have to be significantly different from the ones that were repealed.

Since Airbnb was founded, hosts keep 97% of the money they generate through hosting and have earned over $65 billion from Airbnb rentals, as per the release.