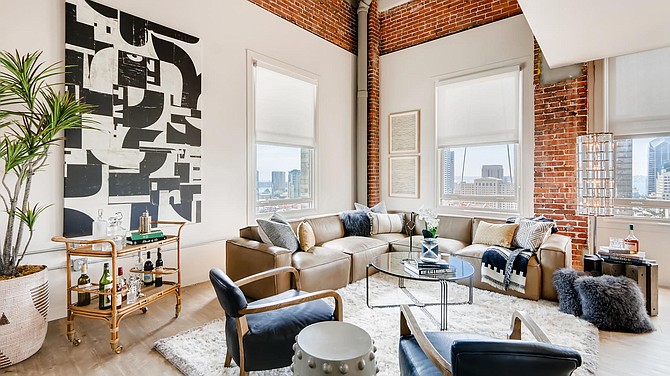 Completed in 1927 as a bank, the 13-story building at 625 Broadway was conceived by the philanthropist for whom it’s named but completed after his death.

The building was known at various times in its history as the Bank of Italy, the Bank of America building and the Home Fed building, depending on who occupied it, but throughout it all, it carried a second name — the John D. Spreckels building.

Hammer Ventures bought it in June 2014 for $52.5 million, restored the exterior and renovated the interior to create 231 apartments, 198 of which are flats with 33 lofts.

Its new name is simply its address — 625 Broadway. 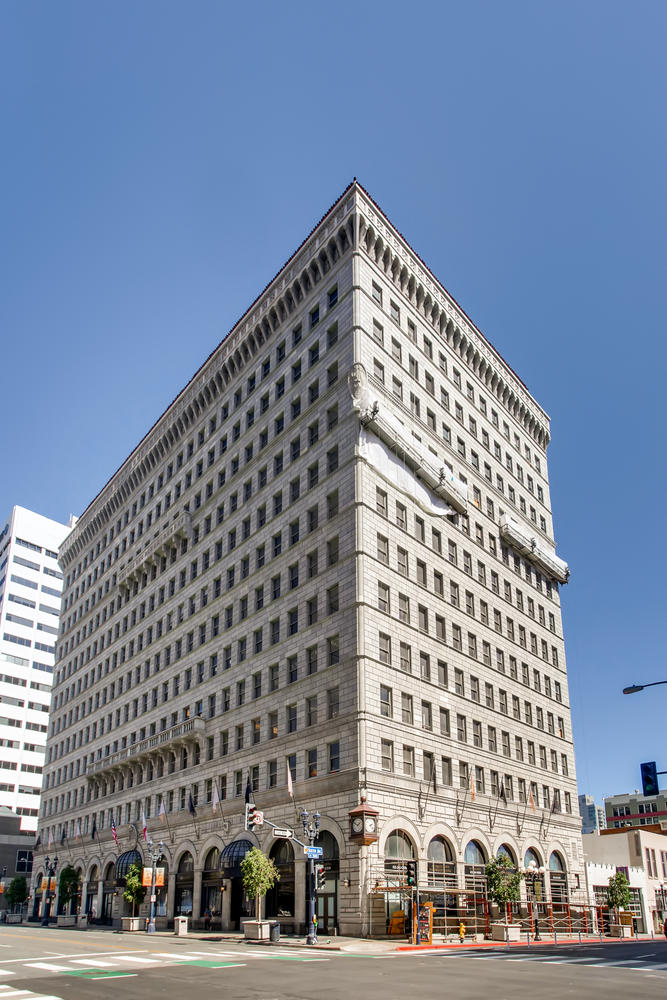 The historic John D. Spreckels Building at 625 Broadway has been remodeled into apartments. Photo courtesy of Hammer Ventures.

Stepping inside the lobby is like taking a walk back in time.

The bronze metal doors to the elevators have been kept as has the bronze plate above them that marks the rise and descent of the elevators.

The apartments are like few others in San Diego — a blend of old and new with ceilings that are 12 feet high in the flats and up to 29 feet in penthouse lofts, oversized windows that are 6 feet tall, exposed brick walls, and windows that give views of the Coronado Bridge, downtown San Diego and down Broadway to the San Diego Bay and the cruise ship terminals.

They are in sharp contrast to the ultra-modern towers that have been popping up elsewhere downtown, especially in the East Village and Little Italy.

“Not everybody wants the glass and concrete, shiny obelisk,” said Kevin Mulhern, a senior vice president of the commercial brokerage CBRE.

“There certainly are folks that love the historic aspect of a building,” Mulhern said. “When it’s done right, you still have all the modern amenities and all new finishes and everything else, but you also have that historic element to it, that kind of Old World charm or whatever you want to call it.”

Keeping the historic feel of the building was very much a part of the renovation of 625 Broadway, said Lawrence Howard, director of development at Hammer Ventures.

“625 Broadway is a designated historical resource. All elements of the exterior were maintained and improved,” Howard said. “The original windows were restored as were some interior elements like the original brick, floors and concrete shell structures.”

At the same time, the interior renovation was “an extensive overhaul on all building systems,” Howard said, adding that “625 Broadway is essentially a brand new building built to current code within the historic steel and concrete structure.”

Office Fixtures Out, Appliances In

Before Hammer bought the building, most of it was used as office space. All of the office structures have been removed.

“The goal was to strip it down to its original form, expose the historic architectural components that make it unique, and then elevate the unit (apartment) with high-end finishes around the original form,” Howard said.

Amenities include a 3,415 square-foot fitness center with skylights and a 650 square-foot yoga/barre studio, a 2,285 square-foot clubhouse with a catering kitchen, a bar, a game room and resident lounge.

There’s also a 250 square-foot business center and lounge and an 830 square foot “green room” which Howard described as an “oasis featuring lush plants and a Zen fountain.”

Parking for residents is provided in an adjacent garage.

M.W. Steele was the architect and Swinerton Builders was the general contractor.

“You’ve got multiple projects, big projects that are still in lease-up. On the flip side, the absorption is very good. It’s not a situation where we’ve topped demand,” Mulhern said. “It’s not like there’s been a sudden drop in demand.”

The 625 Broadway project also stands out from its competitors because of the history behind it, Mulhern said — a point Hammer Ventures stresses in its marketing.

“625 Broadway is inherently different and unique to San Diego,” Howard said. “It is of a time and place, made by hand from raw materials, industrious, ornate, analog, heavy, grand, timeless.”