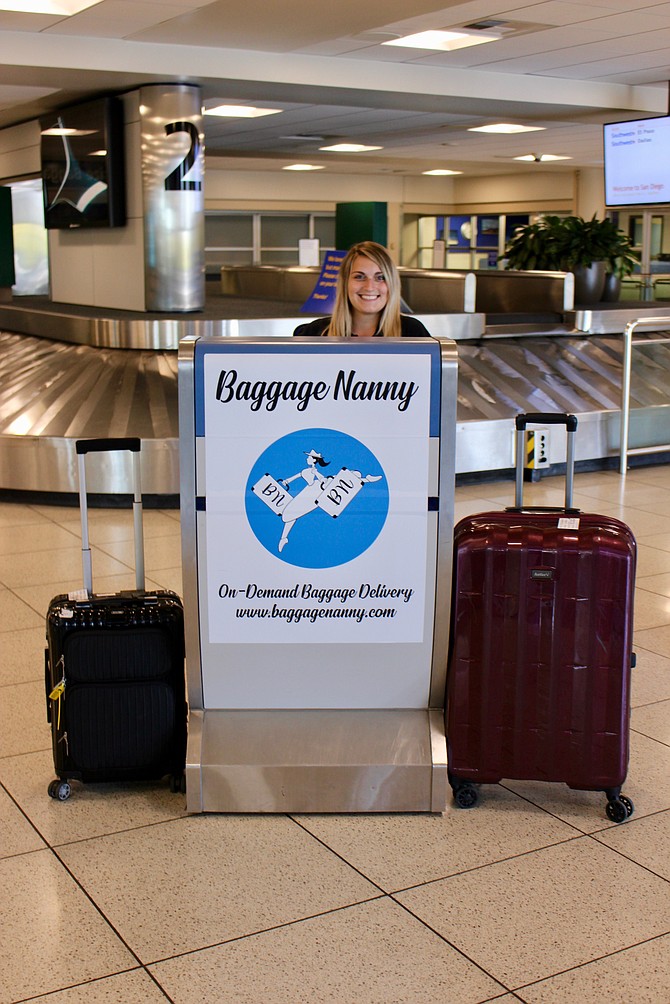 Located at a staffed kiosk in Terminal 1 next to the baggage claim turnstiles, Baggage Nanny is a first-of-its-kind, on-demand concierge service. Photos courtesy of Baggage Nanny LLC.

Located at a staffed kiosk in Terminal 1 next to the baggage claim turnstiles, Baggage Nanny LLC is a first-of-its-kind, on-demand concierge service that aims to further accommodate travelers’ cargo needs, according to its founder and CEO.

“Baggage Nanny came from my background in the vacation rental industry,” said Crystal Browning, who launched the company in 2018 as a brick-and-mortar and on Aug. 14 at the airport. She ran her own cleaning company called Clean as a Whistle for five years through which she offered additional concierge services such as a stocked fridge or a manicure. “One question we got consistently from customers was … for storage options for their bags … if they were flying in early and check-in was at 4 p.m. or flying out late in the evening.”

Browning first launched Baggage Nanny as an additional concierge service through Clean as a Whistle, but after seeing the high demand for it, opened a storefront in Little Italy last year. Encouraged by SAN after approaching them for a permit to operate at the airport, she joined its Innovation Lab and, after graduating, was able to launch the service there this summer.

Browning said, so far, Baggage Nanny averages 10 to 25 bags a day. It costs $20 per bag no matter the weight, and, since last month, the company’s revenue has grown 48%. The goal is to get to 100 bags a day per terminal by the end of the year, said Browning, as well as five airports by the second quarter of next year.

Baggage Nanny helps travelers that arrive to their destination before their check-in time or depart later than their check-out. Using a mobile-friendly website, users can drop off their bags at a designated terminal kiosk and, once ready to check-in, the company can drop off their bags to them. Baggage Nanny can also pick up bags and store them at a requested terminal for travelers ahead of their departure time, according to Browning, who adds that the company has full insurance, identity verification, numbered security tags and tamper-proof seals. Baggage Nanny follows federal guidelines like the ones used for anything shipped via snail mail, including no hazardous materials or weapons, said Browning. She said all Baggage Nanny customers have to confirm they have read and acknowledged all of the company’s terms and conditions prior to receiving service.

For added security, Browning said the bags have already gone through TSA before arriving at the Baggage Nanny kiosk. And, when left with Baggage Nanny before a flight, the bags go through TSA after drop-off. “They are getting checked either on the way in or the way out,” she said.

Landing in Other Cities

Baggage Nanny is expected to open a second kiosk at Terminal 2 by the end of this month; that station will be at the base of the terminal’s escalators leading to the baggage claim area, Browning said. In addition to SAN, Baggage Nanny will expand in a few more airports across the U.S., including Portland International Airport by the end of this year, with hopes of being in five airports by the second quarter of 2020, she said. When that happens, Browning said the company will roll out its own mobile app.

At the end of this month, the Baggage Nanny store will relocate from Little Italy to Point Loma to better accommodate its customers, Browning said. And, in coming weeks, the Baggage Nanny service will be offered as a concession on the AtYourGate application, a locally based food delivery service that also kicked off at San Diego International Airport last year.